Across Colorado, Money Matters for Longevity There’s a strong link between how much money you make and how long you’re likely to live.

Researchers have identified this connection before, but it’s bolstered by new data from the Robert Wood Johnson Foundation’s County Health Rankings, which suggests that people in the state’s affluent counties are likely to live longer than those in counties with lower income levels.

This year’s County Health Rankings include new data about premature death in Colorado, which is gauged by a statistic called Years of Potential Life Lost (YPLL). All deaths before age 75 during a three-year period are summed and then divided by a county’s population. This number is multiplied by 100,000, yielding a YPLL rate per 100,000 residents.

Why look at premature deaths? Many of them can be prevented: The U.S. Centers for Disease Control (CDC) estimates that nearly 900,000 Americans each year die prematurely from the top five causes of death (heart disease, cancer, unintentional injuries, stroke, and respiratory disease). The CDC considers up to 40 percent of these deaths to be preventable—for instance, through behavior changes like improved diet and exercise.

What’s happening in the state’s counties, however, doesn’t always mirror the statewide story, as a look at two of the state’s largest counties — Pueblo and Douglas — reveals.

Douglas County is among the best-performing counties in in the country on this metric, at 3,500 YPLL per 100,000.

County-level data on premature death are not reported by income, but they are reported by race — a social determinant strongly correlated with income.*

Within Douglas County, however, the premature death rates between white, Hispanic, and black residents are roughly the same, hovering around 3,400-3,600 YPLL per 100,000. 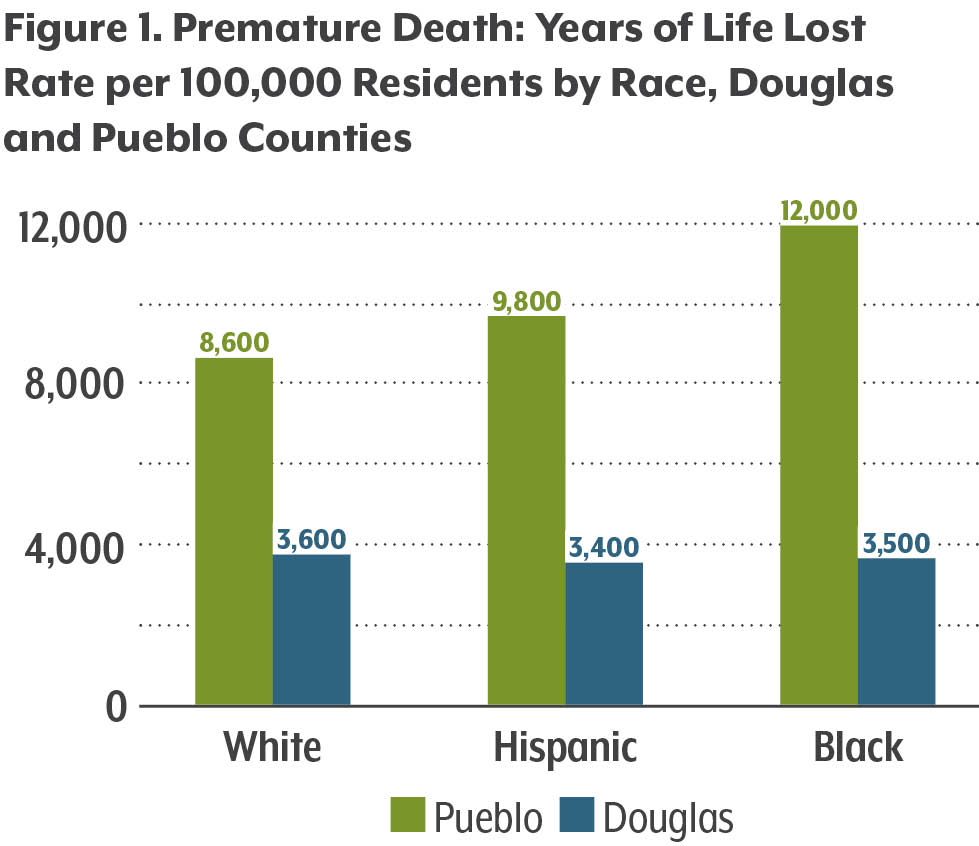 So why the gap for premature death between races in Pueblo County, but not in Douglas?

There are many potential reasons for the disparities. One possibility suggested by the County Health Rankings is income inequality, both between the counties and within them.

A study conducted by the CDC in 2012 explored disparities in premature death among low- and high-income U.S. counties. It showed a strong association between premature death and income, with lower-income counties having higher rates — a trend we observe in the difference between Douglas and Pueblo.

Douglas County is Colorado’s most affluent county, boasting the highest median income and the second-lowest poverty rate in the state: 3.6 percent, compared to Pueblo’s 19.8 percent, according to the American Community Survey.

Douglas County residents of all races have higher incomes than their counterparts in Pueblo, with black, Hispanic, and white households in Douglas making more than double the median income of those in Pueblo (see Figure 2). Data in the County Health Rankings also suggests that there is significantly more income variation between races in Pueblo County than in Douglas County. 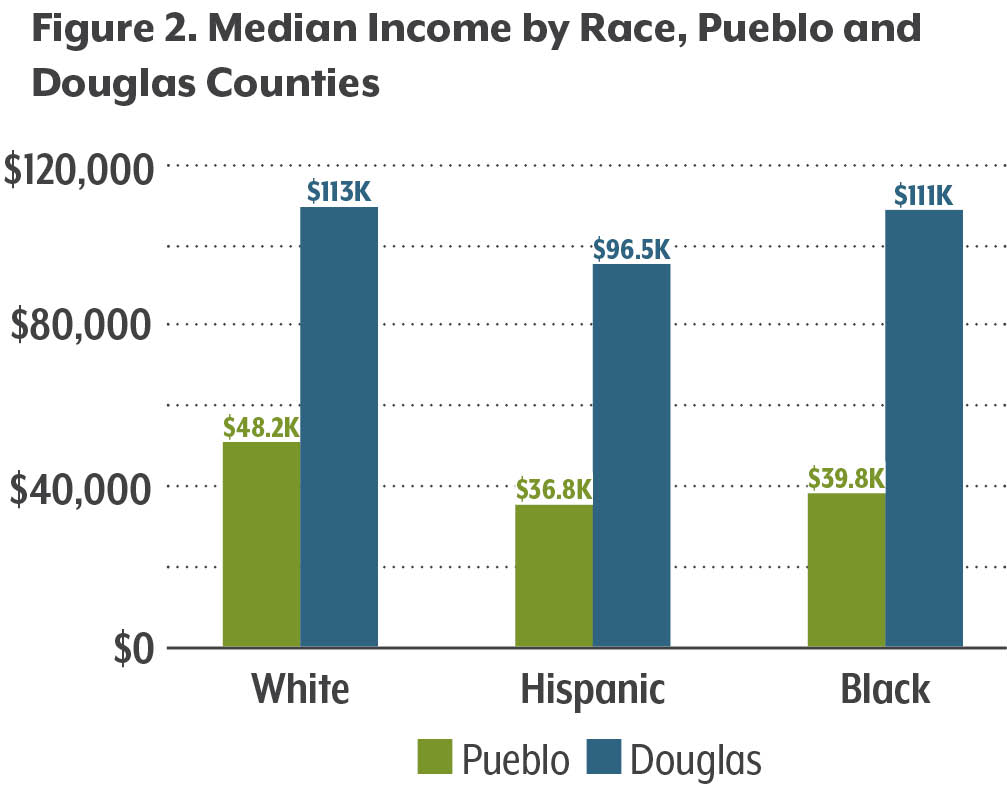 What can we do to prevent premature deaths?

Of course, metrics looking at income alone cannot explain why premature death, let alone any health outcome, varies by race or where we live. It’s complicated—but there is a rich body of evidence that systematic racism causes differing health outcomes, even among those who are well off.

Understanding disparities that exist in our communities can point to areas for policymakers and health agencies to intervene. Colorado’s local public health agencies (LPHAs) have put together county health priorities and strategies to address them. For example, LPHAs in Bent and Custer counties identified obesity, a driver of heart disease and stroke, as a priority health issue to address for their communities. Both counties are implementing strategies to promote community fitness programs and increase access to recreation centers for adults and children.

Park County’s LPHA identified injury prevention as a priority health issue for their community, with decreasing YPLL due to motor vehicle crashes as a targeted goal. Strategies to address this include increasing the number of DUI enforcement activities and providing education online to residents about hazardous driving conditions during high risk times such as winter.

The goal is to create conditions and actions that make it easier for people to make healthier choices and live longer, whether that’s by increasing access to health care, nutritious food, good paying jobs, and stable housing, or creating conditions for a safe, clean environment. Awareness of the role that location, race, income, and other social determinants play in these outcomes is key to designing a successful program.