Although a healthy diet is a critical component of a healthy life, many Coloradans struggle to afford food, according to new data from the Colorado Health Access Survey (CHAS).

In 2019, one in 10 Coloradans (9.6%) experienced food insecurity, defined as eating less than they felt they should in the past year because there was not enough money for food.

Putting food on the table was not the only challenge for Coloradans who struggled with food insecurity. They were also more likely to report unstable housing and difficulties paying their medical bills. And they were more likely to be in poor health than those who could always afford enough food.

Some Coloradans were more likely to experience food insecurity than others. A quarter of young adults in rural areas (25.4%) and a fifth of black Coloradans (22.2%) experienced food insecurity in 2019. People with lower incomes, Hispanic/Latinx Coloradans, and women were also disproportionately affected.

By promoting equitable access to affordable, nutritious food, policymakers and community leaders have the power not only to fight hunger but to advance health equity in Colorado. 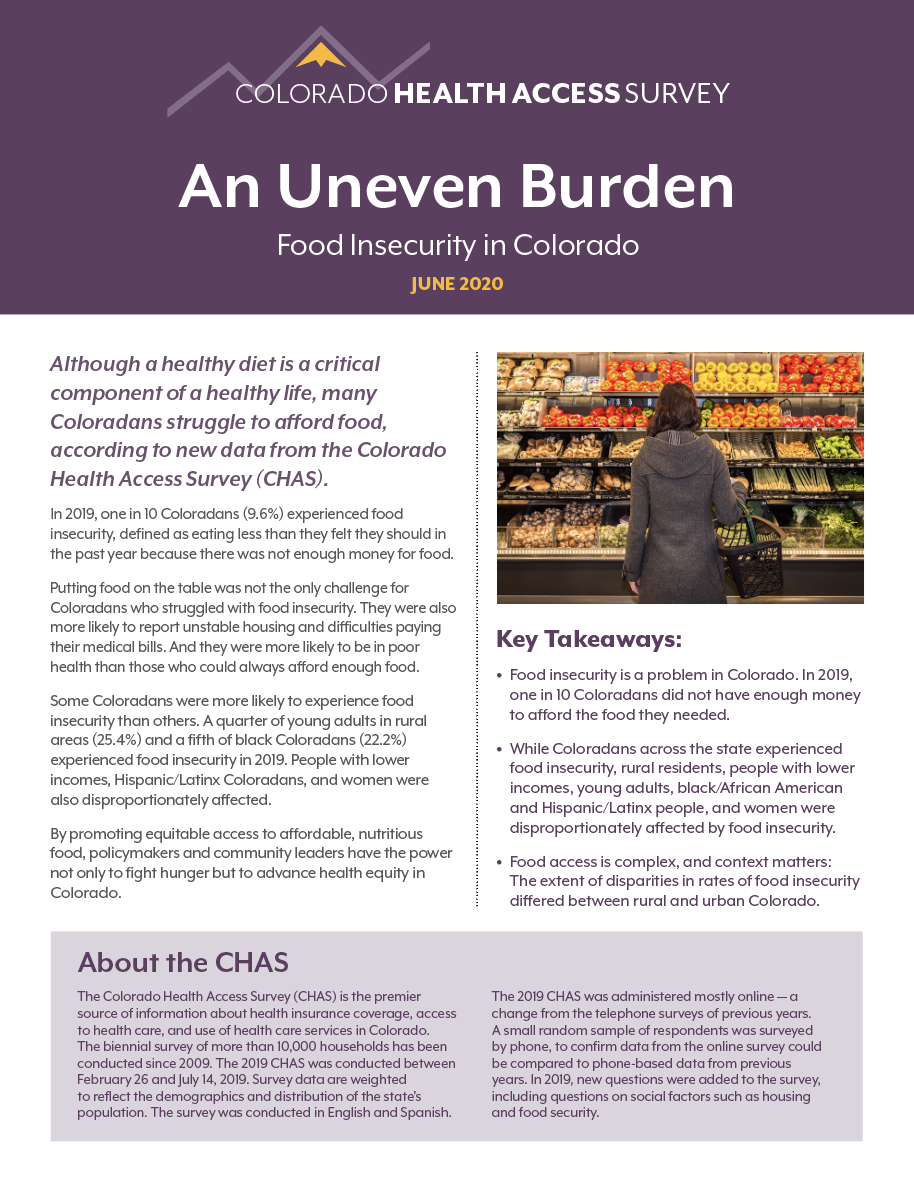 This is consistent with other research that has found associations between food insecurity and adverse health outcomes across the life course, including birth defects, asthma, poor oral health, depression, diabetes, hypertension, and reduced ability to live independently as an older adult.

Food insecurity is even more closely tied to health outcomes than poverty. In 2019, 37.5% of Coloradans who experienced food insecurity in the past year reported poor or fair general health, compared with 26.7% of those with incomes below the Federal Poverty Level (FPL).

Across the state, some populations were disproportionately affected by food insecurity in 2019 — and in many cases, disparities manifested themselves differently in urban and rural Colorado.

The connection between income and food insecurity is clear: The more a person earns, the easier it is to buy food. Coloradans earning at or below 200% of the FPL — $51,500 for a family of four in 2019 — were most likely to experience food insecurity: Nearly one in five (18.9%) reported experiencing food insecurity in 2019.

Challenges and Complexity in Rural Colorado

This disparity mirrors the economic conditions of rural and urban Colorado. In 2018, 12.3% of rural Coloradans lived at or below the FPL (then $25,100 for a family of four), compared with 9.3% of urban Coloradans. Research also indicates that rural communities face unique challenges to accessing healthy foods, including fewer healthy food retailers and longer distances to stores.

This analysis designated an HSR as urban or rural using definitions provided by the Office of Management and Budget (OMB) and used by the Colorado Rural Health Center. If a county is located in a metropolitan area or contains a municipality with 50,000 or more residents, it was considered urban. All other counties were considered rural.

All HSRs spanning exclusively urban counties were designated as urban HSRs. Only one HSR includes both urban- and rural-designated counties: HSR 5, on the Eastern Plains, spans one urban county and three rural counties and was considered rural for the purposes of this analysis.

Adults 19 to 29 years old were most likely to experience food insecurity in Colorado. Statewide, 16.3% of 19- to 29-year-olds experienced food insecurity, compared with 9.6% of the overall population.

Young adults in rural areas were especially at risk: In rural Colorado, one in four people ages 19 to 29 (25.4%) experienced food insecurity — 1.7 times the rate of their urban counterparts and 2.6 times the state average of 9.6%.

Communities of Color and the Deep Roots of Inequality

Black Coloradans in urban areas experienced food insecurity at three times the rate of their non-Hispanic white counterparts. The CHAS did not have a large enough sample size to report on food insecurity rates among black residents of rural areas.

Racial and ethnic disparities in food insecurity are the product of long and enduring histories of structural inequality and discrimination in domains such as employment, housing, education, and transportation. Black and Hispanic/Latinx Coloradans are disproportionately impacted by poverty, but even controlling for economic factors, people of color may be at greater risk for food insecurity.13  For example, studies have found that predominantly black neighborhoods have significantly fewer supermarkets, less access to fresh produce, and more fast-food restaurants than predominantly white neighborhoods.

Gender Inequality at the Dinner Table?

In urban areas of Colorado, food insecurity rested unevenly on the shoulders of women: 10.5% of women in urban Colorado experienced food insecurity in 2019, compared with 7.8% of men.

In rural areas, however, there was no statistically significant difference in the rates of food insecurity between women and men.

That women in urban but not rural areas were disproportionately affected by food insecurity relative to their male counterparts may in part be due to higher rates of single motherhood in urban Colorado.

According to national data, in 2018, 27.8% of households with children headed by a single woman were food insecure, making them 2.5 times more likely to experience food insecurity than the average American household. And this disparity cannot simply be attributed to the resources brought in by one, rather than two, incomes. Among households with children headed by a single man, 15.9% experienced food insecurity in 2018, closer to the national average of 11.1%.

In Colorado, a greater proportion of urban residents live in a household with children that is headed by a single woman — 2.3%, compared with 1.7% of rural residents. This may be one of a number of factors contributing to a significant gender disparity in urban Colorado.

SNAP and WIC in Colorado

The Supplemental Nutrition Assistance Program (SNAP) is a federal program that provides benefits to supplement the food budgets of low-income families. In 2018, Colorado raised its eligibility threshold from 130% to 200% FPL.

Children under five and pregnant and breastfeeding women may also qualify for the Special Supplemental Nutrition Program for Women, Infants and Children (WIC) if they live in households earning at or below 185% FPL. WIC is a federal program that provides healthy food, breastfeeding support, and nutrition education to eligible families.

When it comes to connecting eligible households to these benefits, Colorado has a long way to go. In 2018, the Colorado Blueprint to End Hunger reported that only six in 10 eligible Coloradans were enrolled in SNAP, and five in 10 were enrolled in WIC. That placed Colorado 44th lowest in the country for enrolling eligible individuals and families in SNAP and 48th lowest for WIC.

To estimate whether a child had experienced food insecurity in the past year, the CHAS asked an adult in their household, “In the past 12 months, did [the child in your household] ever eat less than their parent/guardian felt they should because there wasn’t enough money for food?”, one of a number of questions included in the Current Population Survey (CPS) Food Security Supplement, which the U.S. Department of Agriculture uses to estimate food insecurity.

This discrepancy likely stems from the ways in which the CHAS and CPS defined and screened households for food insecurity. CPS used a questionnaire with a wide range of food-related questions and identified households as “food insecure” if they reported three or more conditions that indicated food insecurity. For example, a household was found to be food insecure if they reported that they worried whether their food would run out before they got money to buy more; that the food they bought didn’t last, and they didn’t have money to get more; and that they couldn’t afford to eat balanced meals. Meanwhile, the CHAS used a single question that targeted a narrower set of criteria, and only individuals whose food intake had been reduced due to insufficient finances were considered to have experienced food insecurity.

The definitional differences should not undermine the seriousness of food insecurity among Colorado’s children. The CHAS finds that some 49,000 children across Colorado ate less than they should have because their family did not have enough money for food, and other sources indicate that many more — as many as 159,000 — experienced food insecurity in other forms. Definitional differences notwithstanding, both surveys find that tens of thousands of Colorado’s kids live in households that struggle to access adequate food — a concerning finding, no matter how it is reached.

Challenges and Opportunities Ahead

At the federal level, the Trump administration has led efforts to restrict eligibility for SNAP benefits and relax regulations of school meal programs.

At the state level, an especially tight budget for fiscal year 2020-21 left legislators with a limited pool of funds to allocate toward public initiatives such as anti-hunger programs, even early in the legislative session.

And most recently, the spread of COVID-19 has impacted communities across Colorado in profound ways. The state unemployment rate has soared as businesses have shut their doors. Local food banks and pantries have found themselves under enormous stress as donations from large grocers have diminished and the need for food assistance has risen dramatically. Demand for public assistance programs such as SNAP has surged. And state legislators have been limited in their ability to provide recourse, as the recession forced some $3 billion in cuts.

Despite these challenges, Coloradans are continuing to combat food insecurity in their communities. In the final days of the legislative session, policymakers passed House Bill 20-1422, allocating $500,000 of federal coronavirus relief funds to a food pantry assistance grant program. And from advocacy initiatives, such as the Colorado Blueprint to End Hunger, to community-based organizations implementing food assistance programs on the ground, people across the state are hard at work to ensure all Coloradans have access to the food they need to live healthy lives.

Findings from the CHAS are concerning. Food insecurity is a significant problem in Colorado, the connections between food and health are clear, and disparities in access to food are profound.

But the data also hint at what is possible. Targeted, sustained efforts to promote food access among populations most affected by food insecurity can make Colorado a healthier and more equitable place for all who call it home.

Who’s Missing from this Analysis?

The CHAS asks respondents for demographic information, including race, ethnicity, and gender identity. In some cases, the number of people reporting a certain identity is too small to provide a sufficient sample for analysis. For this reason, this report does not include data on Coloradans who identify as Asian, Native Hawaiian or other Pacific Islander, American Indian or Alaska Native, or transgender.

People experiencing homelessness, those without internet or telephone, and those living in institutions such as prisons do not receive the survey.

Julia Char Gilbert is a Policy Analyst at the Colorado Health Institute. She conducts research, analysis, and evaluation on issues such as food insecurity, school-based health care, and the direct care workforce. Julia also analyzes Colorado policy and politics as a member of CHI’s legislative services team.