Nutritious food and housing are fundamental to health. Yet one in 10 Coloradans don’t get enough to eat, and one in 15 worry about having a place to live.
Published: January 28, 2020 | Updated: May 13, 2021
Colorado Health Access Survey
Rural Health
Social Determinants of Health

A healthy and balanced diet is a critical component of a healthy life, but many Coloradans struggle to afford food. Nearly one in 10 Coloradans (9.6 percent) ate less food than they felt they should in the past year because there wasn’t enough money for food.

Providers and researchers are becoming increasingly aware of how important these types of social determinants can be to overall health, and the data back this up—37.5 percent of Coloradans experiencing food insecurity report fair or poor health, compared with 11.9 percent of other Coloradans. Food insecurity is especially prevalent in rural areas, where many people have lower incomes and are less likely to have quick access to multiple grocery stores.

Policy: New private and public efforts are addressing hunger throughout the state. Increased access to healthy food is part of Governor Polis’ Roadmap to Save Coloradans Money on Health Care, and the Colorado Health Foundation is investing in the Colorado Blueprint to End Hunger, an effort led by a statewide coalition dedicated to ensuring all Coloradans have enough to eat.

Data: More than one in nine rural residents (11.7 percent) say they experience food insecurity, compared with closer to one in 11 (9.3 percent) residents of urban areas.

Stories of the CHAS: Hunger Is a Pressing Need in Many Colorado Communities

For the first time, this survey report includes personal stories of Coloradans directly affected by food insecurity, access to mental health care, surprise bills, and loss of insurance coverage. Read the first in this series.

Housing is closely linked to well-being. The affordability, stability, quality, and accessibility of a home all affect a person’s health. But in recent years, Colorado’s booming economy has led to limited housing supplies, leaving some residents unable to afford their homes.

Among Coloradans in poverty, more than one in eight (12.8 percent) are worried about housing stability, compared with 2.5 percent of those making more than 400 percent of the federal poverty level. 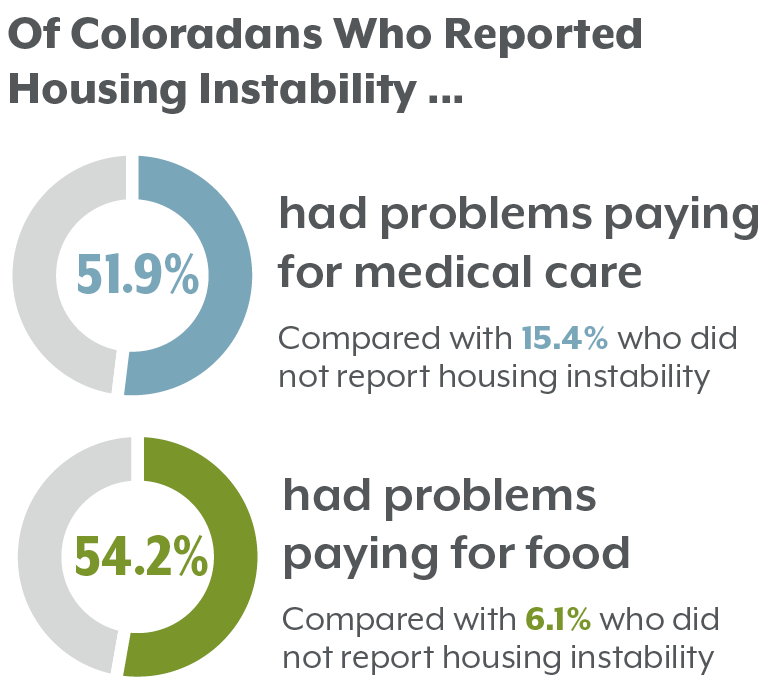 Policy: Increases in the supply of affordable housing can decrease rates of housing instability. House Bill 19-1322 transfers money from the Unclaimed Property Trust Fund to provide affordable housing support for those in need. More legislation related to housing is expected in the 2020 session.

Doctors take an oath to care for all fellow human beings. Yet nearly one in six Colorado adults (15.1 percent) say they are sometimes or often treated unfairly when getting medical care over their lifetime. Common reasons these Coloradans believe they were treated unfairly include age (32.6 percent), disability (21.5 percent) sex or gender (20.9 percent), and race or skin color (17.1 percent).

These experiences can have very real impacts on a person’s health.

More than nine in 10 (94.0 percent) people who believe they were treated unfairly say it caused them some level of stress. And some Coloradans (5.3 percent) actually skip care because they’re worried about unfair treatment or the consequences of getting care. 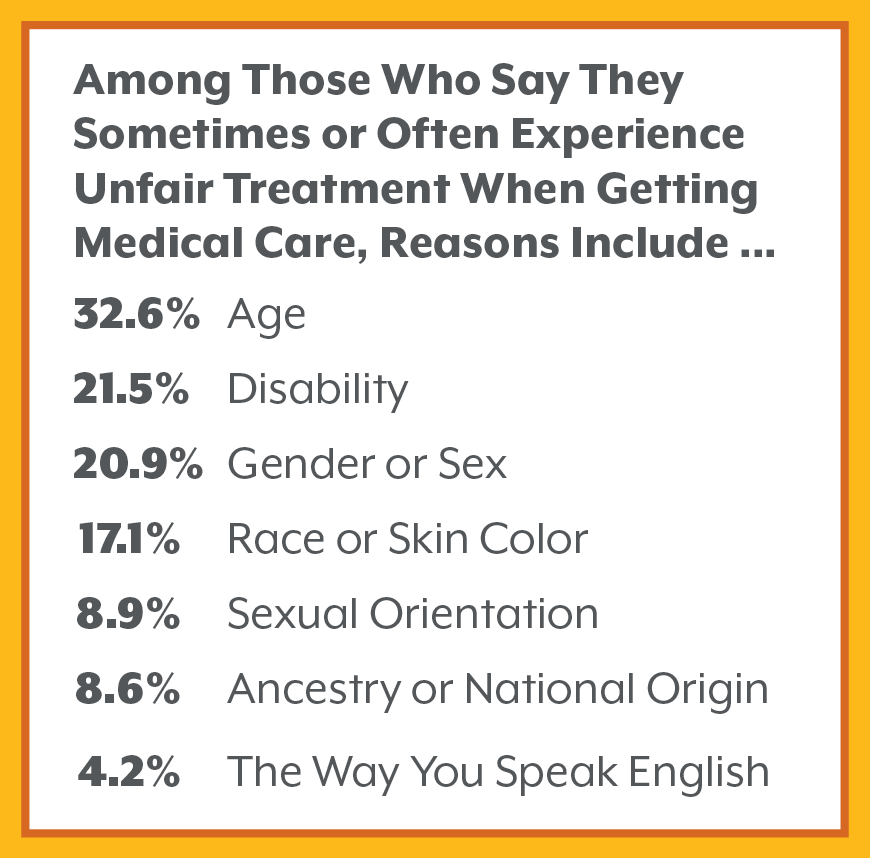 Data: A growing body of research links discrimination and stress to negative health outcomes. Further research documents discrimination and bias against people of color, women, people who identify as lesbian, gay, bisexual, transgender, or queer, and other groups in the health care system.