Trends in Coverage and Churn

One in six Coloradans (17.3 percent) lost, switched, or gained coverage in the past year. Coloradans experiencing this “churn” may struggle with care continuity and financial stability. Reliance on an employer for coverage can increase the risk of churn when someone changes jobs — more than half of Coloradans who switched insurers or lost coverage (53.0 percent) said it was because they lost prior employer coverage. Notably, for the first time since 2013, the percentage of Coloradans with employer-sponsored insurance increased. This growth may reflect the improving economy, with more employers offering insurance or more employees buying into their company plans.

Since key provisions of the ACA took effect in 2014, the largest gains in coverage have happened within the public sphere — specifically Medicaid, which covered one in 10 Coloradans prior to ACA implementation and now covers nearly one in five (18.7 percent). While the ACA also sought to expand coverage within the individual market, rates of individual insurance held steady after its implementation at around 7 to 8 percent. 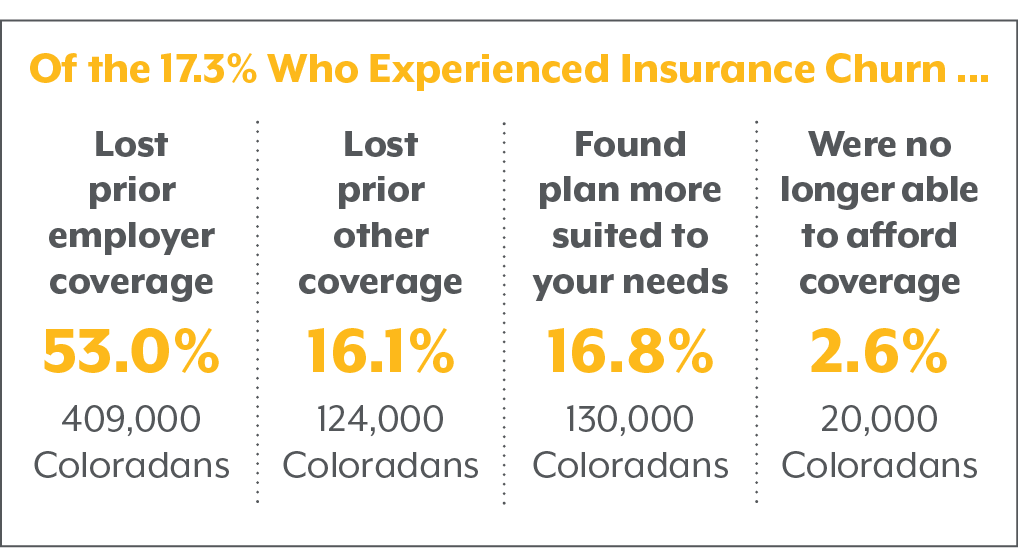 Policy: Health care is at the forefront of the 2020 presidential debate. Democratic candidates have offered an array of options to expand coverage while the Trump administration is challenging many aspects of the ACA. The 2021 CHAS may provide fresh insights into a vastly changed federal health policy landscape.

Data: One in 10 Hispanic/Latinx Coloradans (10.2 percent) are uninsured. This is a notable drop from nearly 27.6 percent in 2009 but remains significantly higher than the uninsured rate of any other racial or ethnic group in the state, due to a complex set of historic and socioeconomic factors and, in some cases, immigration policy and practice.

Colorado’s uninsured rate remains steady at 6.5 percent, or 361,000 Coloradans. But the uninsured rate varies across the state, from 2.6 percent in Jefferson County to 14.3 percent in the I-70 mountain corridor, where insurance premiums are most expensive.

Policy also plays a role in insurance rates. For instance, while young adults in their twenties (sometimes referred to as “young invincibles”) are often perceived as more likely to be uninsured, Coloradans in their thirties and forties are actually more likely to go without coverage in 2019. This may be because young people can stay on their parents’ insurance plans until age 26.

Coloradans with incomes between 139 and 400 percent of the federal poverty level are more likely to be uninsured than those with lower incomes, most of whom are eligible for Medicaid, and those with higher incomes. Not all ACA programs, including Medicaid expansion, are available to all non-citizens.

For example, immigrants without documentation and non-citizens who have lived in the U.S. for less than five years don’t qualify for Medicaid coverage, regardless of income. One in four non-citizens (27.1 percent) are uninsured, compared with one in 20 citizens (5.8 percent).

Even though the uninsured rate has not changed since 2015, people’s reasons for being uninsured have. Cost has always been the biggest barrier to coverage in Colorado, but it’s increasing — nearly nine in 10 uninsured Coloradans (89.6 percent) cited cost as their reason for not having coverage in 2019, up from 78.4 percent in 2017. At the same time, more Coloradans are seeing the need for coverage than they were two years ago. The percentage of uninsured residents who say they do not need coverage fell from 23.6 percent in 2017 to 12.7 percent in 2019. In recent years, health insurance has been the subject of major federal policy debates, and this may have increased the visibility of health insurance’s benefits.

Nutritious food and housing are fundamental to health. Yet one in 10 Coloradans don’t get enough to eat, and one in 15 worry about having a place to live.

For the first time, this survey report includes personal stories of Coloradans directly affected by food insecurity, access to mental health care, surprise bills, and loss of insurance coverage. Read the third in this series.

Since 2015, Coloradans have enjoyed a record-low uninsured rate. Yet the affordability of health care remains a challenge, with one in five (20.2 percent) Coloradans forgoing doctor, specialist, or prescription services due to cost. Mid- to low-income Coloradans are more likely to face this barrier.

But those with incomes below the federal poverty level actually report problems with affordability less frequently, suggesting that Medicaid helps reduce cost challenges for many low-income Coloradans.

Cost can also burden those who make it to a doctor’s office. In 2019, nearly one in three Coloradans (30.6 percent) were surprised by a medical bill that they thought would be covered by insurance. And one in five Coloradans (18.1 percent) — the most since 2014, when key provisions of the Affordable Care Act took effect — said they have problems paying medical bills, which can result in lowered spending on other needs, debt, or even bankruptcy.

Policy: House Bill 19-1174 seeks to reduce the likelihood of a surprise bill by increasing notifications and disclosures saying that consumers may incur additional costs when they seek care from providers who are out of their health insurance’s network.

Data: Black (non-Hispanic / Latinx) Coloradans are nearly twice as likely to have had problems paying a medical bill than white (non-Hispanic / Latinx) Coloradans (30.2 percent versus 16.5 percent). A history of discriminatory policy and practice has led black Americans to have, on average, less than 10 percent of white Americans’ household wealth. 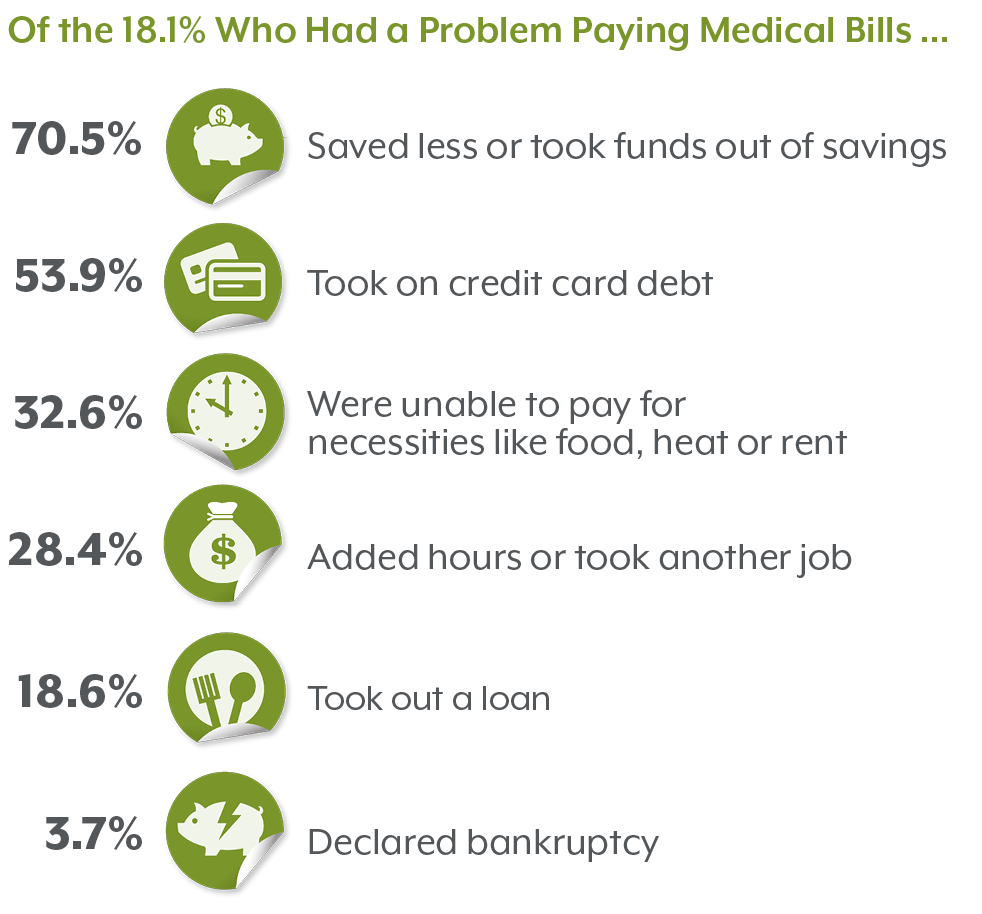 Stories of the CHAS: Trauma of Surprise $1 Million Bill Gives Way to Relief and Gratitude

For the first time, this survey report includes personal stories of Coloradans directly affected by food insecurity, access to mental health care, surprise bills, and loss of insurance coverage. Read the fourth and final story in this series.