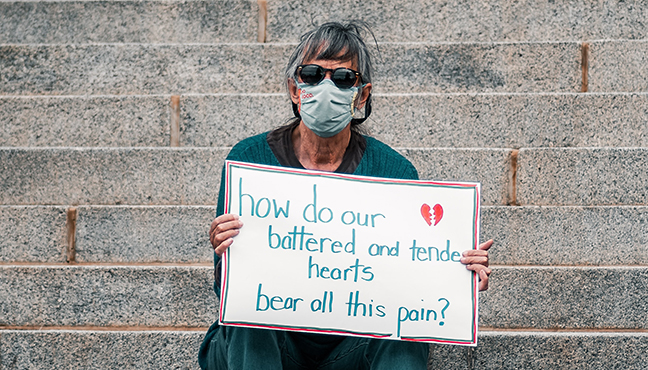 This Friday is Gun Violence Awareness Day. In the United States, gun violence is a public health issue. And in Colorado, many members of our community are grieving.

And despite the devastating impacts mass shootings have had on Colorado communities, victims of mass shootings account for only a small proportion of gun deaths in the state.

In 2020, 918 Coloradans died from firearm injuries, according to the Colorado Department of Public Health & Environment — more than the number who died from motor vehicle accidents. Among gun deaths for which data were available, 26% were homicides, 73% were deaths by suicide, and less than 1% were accidents.

Colorado has the 18th highest firearm death rate in the country, according to the Centers for Disease Control and Prevention, with 14.2 deaths per 100,000 people in 2019.

How to prevent firearm deaths — and the appropriate role of government in pursuing that goal — remains a hotly debated topic across the United States, and Colorado is no exception.

Nearly a dozen gun-related bills have been up for consideration at the State Capitol this legislative session. As the state legislature heads into its final days of the session, here is a look at the gun-related bills that have passed, failed, and remain on the table.

Legislators from both sides of the aisle have introduced a wide array of firearm-related bills this session. Some measures seek to relax existing gun policies; others aim to strengthen them.

On one side of the debate, a handful of Republican lawmakers have introduced measures to relax the state’s existing gun control policies. Five such bills were introduced early in the session, each with a single Republican prime sponsor. All five measures failed in committee, with legislators voting along party lines.

Would have allowed Coloradans with a concealed carry permit to carry a concealed handgun onto school grounds.

Would have reversed a prohibition on selling, transferring, or owning certain large-capacity ammunition magazines.

Would have repealed the governor’s authority to suspend or limit the sale of firearms during an emergency and would have allowed handgun training classes to be held virtually or outside of traditional classrooms.

On the other side of the aisle, Democrats have introduced six bills to strengthen Colorado’s gun control policies.

Three bills were introduced early in the session — two of which have already been signed into law. Colorado gun owners are now required to store firearms out of reach of children and must report a lost or stolen firearm in a timely way.

A package of three additional bills was introduced following the mass shooting in Boulder, including measures to expand background check requirements, establish an Office of Gun Violence Prevention, and allow local governments to enact their own gun control measures.

Requires firearms to be stored safely when a gun owner knows that the firearm is accessible to a child or someone who is not allowed to own a gun.

Requires gun owners to report the loss or theft of their firearm within five days of discovering it is gone.

Would establish a new Office of Gun Violence Prevention under the Colorado Department of Public Health & Environment, which would spearhead efforts to reduce gun violence, including public awareness campaigns and a grant program.

Would add certain misdemeanor convictions, such as bias-motivated crimes or sexual assault, to the list of crimes that prohibit someone from buying a gun. Would require firearms dealers to wait for approval from the Colorado Bureau of Investigation (CBI) before selling a gun. (Right now, sales can proceed if a background check takes longer than three days.) Would also give the CBI more time to respond when someone appeals the results of their background check.

But despite partisan divides, there is widespread political support to do something about gun deaths in America. Three in four Americans (72%) see gun violence as a “very big problem” or a “moderately big problem” in the U.S. today, according to Pew. Just over half of Americans (53%) favor stricter gun laws; 32% support the current level of gun laws; and 14% favor less strict gun laws.

Many measures, including several suicide prevention bills, have strong bipartisan support at the Capitol this year. But with Colorado Democrats controlling the House, Senate, and governor’s mansion, the majority party may not need Republican legislators’ blessing to enact new gun control policies this spring.

Thus far, legislators have defeated measures to relax existing gun control policies and have passed four measures to strengthen Colorado’s gun safety laws. There are two outstanding firearm bills on the table and just a few days left in the legislative session.

Regardless of what makes it onto the books before legislators break for the summer, Colorado will still have work to do. Some 918 Coloradans died by firearm last year — that’s 918 lives too many.