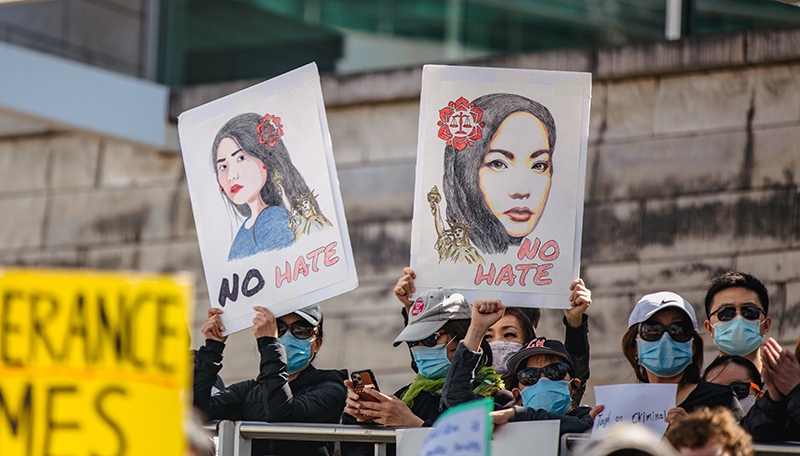 Early last year, as the novel coronavirus spread across the United States, so, too, did racist, xenophobic narratives blaming Asian people for the pandemic.

Prejudice against Asian Americans and other communities of color did not arrive in the United States with the first case of COVID-19. But rhetoric attributing the pandemic to people of Asian descent fueled a rise in discrimination and violence.

President Donald Trump was quick to blame China for the pandemic and repeatedly referred to COVID-19 as “the China Virus” and “kung flu.” A recent study published in the American Journal of Public Health found that after President Trump tweeted the phrase “Chinese virus” in mid-March of last year, the number of anti-Asian hashtags on Twitter soared.

But the narrative did not stem from the White House alone.

In April 2020, the National Republican Senatorial Committee distributed a 57-page memo to Republican candidates, advising them to address the coronavirus by attacking China. It stressed three key talking points: that “China caused this pandemic by covering it up, lying, and hoarding the world’s supply of medical equipment”; that Democrats are “soft on China”; and that Republicans will “stand up to China… and push for sanctions on China for its role in spreading this pandemic.” The authors of the memo were not blind to possible repercussions of this messaging: The memo lists “Aren’t you being racist by blaming China and causing racist attacks against Chinese Americans?” as a “likely argument” for which candidates should prepare responses.

According to The Denver Post, numerous Colorado Republicans “ramped up” criticism of China in the weeks following the memo’s publication. And in September 2020, when U.S. Representative Grace Meng (D-NY) introduced a resolution condemning COVID-19-related anti-Asian sentiment, 164 legislators, all members of the Republican Party, voted in opposition. Representatives from Colorado voted along party lines.

Insinuations that China is singularly responsible for the pandemic have also circulated in the mainstream media, such as op-eds in the Washington Post titled “China should be legally liable for the pandemic damage it has done” and “The coronavirus has helped us finally see China for what it is.” Major media outlets have also repeatedly published photos of Asian people alongside unrelated coverage of COVID-19. When the New York Times reported on the first case in New York — a Manhattan resident who had recently traveled to Iran — the story was accompanied by a photo of pedestrians in Flushing, a predominantly Asian neighborhood in Queens.

The pervasive narrative that people of Asian descent are more likely vectors of disease or are otherwise responsible for the spread of COVID-19 has no scientific basis. It also actively fueled discrimination and violence against Asian Americans.

A Rise in Anti-Asian Violence

Asian Americans have faced heightened discrimination and violence since the onset of the pandemic. In February 2020, even before COVID-19 reached Colorado, local Chinese restaurants reported a 30-40% drop in business due to racist stigma around the virus. In Littleton, a Thai restaurant was vandalized with a hate symbol. Across the state, Asian American Coloradans have reported being spit on, pushed into oncoming traffic, verbally harassed, and threatened.

Throughout the nation, Asian Americans have also been targeted in a wave of physical attacks. A family with a 2-year-old baby, an Air Force Veteran, and a high school teacher are among those who have been severely harmed simply for being Asian while doing everyday things like waiting for the bus, going for a walk, or grocery shopping. And the violence has spanned all ages, from elders, including a 91-year-old being shoved to the ground in Oakland, to young people, including a 13-year-old playing basketball.

These assaults are horrendous, and they are only a fraction of the hate that the Asian American community is facing.

At the federal level, a hate crime is defined as a crime — often violent — that is motivated by bias against an individual's race, color, religion, national origin, sexual orientation, gender, gender identity, or disability. As a result of the dangerous and racist rhetoric used to describe COVID-19, there was a rise in the number of anti-Asian hate crimes reported to the police in 2020. The Center for the Study of Hate and Extremism (CSHE) reports that in 16 major cities across the U.S., hate crimes overall decreased by 7%, but anti-Asian hate crimes increased by almost 150%.

The New York Police Department Hate Crimes Dashboard shows the number of confirmed hate crime incidents per month by type of bias. The data are telling: In 2019, one anti-Asian hate crime was confirmed in New York. In 2020, 27 were confirmed, with almost half occurring in March alone. Xenophobic Google search terms and Twitter posts also spiked in this month, according to CHSE data.

But hate crime data are incomplete.

Underreporting crimes is common, especially among communities of color, because of mistrust in local law enforcement, belief that reports won’t be taken seriously, hesitancy due to immigration status, and language barriers.

Beyond this, the classification of crimes and data collection requirements are inconsistent across states.

Three states — Wyoming, Arkansas, and South Carolina — have no hate crime laws, meaning there are no established penalties for bias-motivated crimes. While Colorado has established hate crime laws, it is one of 18 states and territories that does not require data collection — a necessary component to quantify the issue and identify solutions for affected communities.

Frank Pezzella, an associate professor of criminal justice at John Jay College of Criminal Justice, estimates that only 75% of local law enforcement agencies in the U.S. participate in a centralized hate crime reporting program. Of the police departments that do participate, nearly 90% report zero hate crimes every year. This is due to the sometimes vague definition of a hate crime and how states choose to categorize incidents. As a result, almost 90% of incidents that are reported don’t rise to the level of prosecutable hate crimes. And the ones that do can still fall through the cracks if a victim or prosecutors can’t prove the crime was motivated by a bias.

Capturing Other Forms of Hate

To collect other incidents of violence, harassment, discrimination, shunning, and bullying — and in response to the rise in COVID-19-related hate against Asian Americans — in mid-March of 2020, three Asian American and Pacific Islander (AAPI) organizations created the Stop AAPI Hate reporting center. AAPI people who have experienced racial discrimination or violence can report the incident anonymously via a centralized website, available in multiple languages. Incidents are not forwarded to law enforcement, but the data are used to advocate for AAPI communities, raise awareness, offer support to affected community members, and to advance racial justice among all communities of color.

The group received 3,795 reported hate incidents between March 19, 2020, and February 28, 2021, 44 of which were reported in Colorado. Of the cases reported nationwide, nearly 70% involved verbal harassment or name-calling; over 400 involved physical assault; and 503 cases are from the first two months of 2021 alone.

Almost 70% of Stop AAPI Hate respondents self-identified as female. Asian women are disproportionately affected by discrimination and violence due to the intersections of racism and misogyny — the six Asian women killed in the recent Atlanta shooting are a tragic example of this. This statistic may also indicate that men are less likely to report incidents.

Younger people also accounted for a majority of respondents, with nearly 60% of cases reported by people under the age of 35. This suggests that while Stop AAPI Hate is one of the most robust datasets on anti-Asian hate in the U.S., underreporting remains a challenge, particularly among middle-aged and older adults.

Anti-Asian racism is not new to the United States — or to Colorado.

In 1942, following the attack on Pearl Harbor, President Franklin Delano Roosevelt signed an executive order authorizing the U.S. military to forcibly relocate some 120,000 Japanese Americans from the West Coast and imprison them in internment camps. One such camp was located in Granada, Colorado, on the Eastern Plains. Between 1942 and 1945, over 7,000 Japanese Americans, most of whom were American citizens, were imprisoned at the Granada Relocation Center, also known as Amache.

Another example comes from the heart of downtown Denver. The neighborhood we now know as LoDo was once home to Denver’s Chinatown. In the 1870s, Chinese miners, railroad workers, and business people began settling near where Coors Field currently stands. But in 1880, a pub brawl escalated into a riot. Thousands of white Denverites descended on Chinatown, attacking Chinese residents and destroying their property. One man, Look Young, was beaten to death; his body was hung from a lamp post.

Though the attack on Chinatown may feel firmly situated in our past, there are striking resonances with today’s political moment. In 1880, fear that Chinese workers were taking white Americans’ jobs was a nationally debated issue. And as the mob attacked the Chinese community that night, they reportedly shouted, “Stamp out the yellow plague!”

Characterizations of immigrants and people of color as vectors of disease are also nothing new.

Xenophobia, racism, and the politics of disease have long been intertwined. A few examples from recent history: In 2003, during the SARS pandemic, anti-Asian discrimination in the United States and Canada soared. In 2009, during the H1N1 pandemic, calls to close the border with Mexico grew louder. In 2014, during the Ebola outbreak, accounts of discrimination against people of African descent poured in. The problem was so severe that the U.S. Department of Justice issued a memo relaying that discrimination due to “unfounded fears about possible exposure to Ebola” violated federal civil rights law.

It is essential that all of us — and particularly those of us in the public health field — recognize these patterns of xenophobia and racism and put a stop to this trend.

The need for more consistent hate crime laws and accurate reporting systems is clear — effective policy solutions cannot be created for a problem that isn’t being properly measured. And community-based measures that keep Asian American people safe are critical, too. But our work cannot stop there.

Ending anti-Asian violence — and racism in all its forms — requires ambitious, tenacious work at all levels and across all sectors of society.

For organizations and individuals working in public health and health policy, here are a few places for us to start. This list is non-exhaustive, and we invite you to consider what you would add.

Events of the past year have underscored that racism is a public health emergency — and that it has been for years. We’ve seen that in the particularly devastating impact that COVID-19 has on Black, Latinx, and Native communities; in the death of George Floyd, Breonna Taylor, and other Black Americans at the hands of police; and in the surge of violence against Asian Americans in the wake of the pandemic.

Many have described racism as a second pandemic. But racist ideas are transmitted between individuals and across populations not through airborne particles but through vectors of our own making: language and behavior, media and popular culture, politics and policy. You don’t contract racism the way one catches a cold. Racism is learned and taught, and it is reinforced by institutions from the classroom to the Capitol, sometimes unintentionally and sometimes by design.

But as with COVID-19, inaction in the face of racism is neither neutral nor without consequence. Inaction allows the problem to spread — and the harm inflicted to grow.

Recognizing racism as an immediate threat to our communities’ health is essential, but it is not enough. It is action, not awareness, that will change policy, dismantle systemic racism, and keep our communities safe.

This blog post was researched and written by Research Analysts Julia Char Gilbert and Kimberly Phu.