An estimated 148,000 Colorado adults reported being treated with less respect or receiving worse care than others while seeking health care, according to data from the 2021 Colorado Health Access Survey (CHAS). Of this group, over 52,000 were people of color. Race or cultural or ethnic background were the most common reasons why people of color felt they were disrespected when accessing the health care system. The CHAS shows that discrimination is a barrier to health access. People who identify as Black or African American or Hispanic/Latino were also more likely than white Coloradans to report skipping health care because of concerns about being treated unfairly, according to the CHAS.

While many people can experience discrimination within the health system, this report focuses primarily on people of color. It is well established that being treated unfairly and disrespectfully because of one’s race or ethnicity has far-reaching impacts, not limited to poor physical and mental health outcomes.(1) Additionally, meaningful and significant efforts are being made to improve health outcomes and reduce inequities among people of color, and these data help illustrate why this work is important and where more action is needed.

The CHAS findings offer new insight into recent experiences of discrimination in the health care system and their impact on people of color in Colorado. Taking action to ensure people of color in Colorado receive respectful, fair treatment regardless of their race, ethnicity, or culture is an urgent and necessary step for health care providers to improve health equity.

Data from the CHAS also aligned with that research: Coloradans who skipped care due to fear of unfair treatment were much more likely to report poor health.

Using the CHAS to understand disrespect, unfair treatment, and discrimination

This brief focuses on the following questions:

In 2021, 4.2% of Coloradans ages 18 and older who got health care in the past year — about 148,000 people — reported that they were treated with less respect or received services that were not as good as others received.

More than one in three of those adults (35.2%, or about 52,000) were people of color — that is, people who identified as a race other than non-Hispanic/Latino white on the survey. This group includes people who selected Black or African American, Hispanic/Latino, Asian, Native Hawaiian or Other Pacific Islander, Middle Eastern or North African, American Indian or Alaska Native, or some other race. Small sample sizes prevented analysis by specific groups for this question.

Among people of color who reported being treated disrespectfully, a striking majority reported that ethnic background or culture (89.2%) or race (87.0%) were the reasons.

While people of color who answered the survey may also have reported that they experienced disrespectful treatment due to other aspects of their identities or life experiences, race and culture were the most commonly reported reasons among this group.

Among people of all races who reported being treated with less respect, income was the most common reason (58.3%), followed by ethnic background or culture (37.1%) and race (36.0%) (see Figure 1).

Note: Respondents reported other reasons for being treated with less respect, including disability, age, experience with violence or abuse, gender or gender identity, and sexual orientation. Due to small sample sizes, however, these reasons could not be reliably reported for the adult people of color sample. Respondents could also note more than one reason.

On a separate question on the 2021 CHAS, about 85,000 Coloradans reported needing care that was responsive to their race or ethnic background. Receiving culturally competent care was linked to higher satisfaction with care. (Read more: Diverse State, Diverse Needs.)

In 2021, 3.1% of Coloradans, or about 175,100 people, reported skipping care because they were concerned about unfair treatment or consequences (see Figure 3). Black or African American Coloradans were more than twice as likely than non-Hispanic/Latino white Coloradans (5.4% compared to 2.3%) to report skipping care due to concerns about unfair treatment or consequences. Hispanic/Latino Coloradans (4.4%) were also nearly twice as likely as white Coloradans (2.3%) to report this challenge. Sample sizes for other groups were too small to report.

Past experiences of unfair treatment can influence future decisions about whether to seek needed care.(5) Negative experiences have a profound impact on people’s emotional well-being, as well as their physical and mental well-being.(1) Unfair treatment is associated with increased stress and poor health outcomes: The 2019 CHAS found that nearly all Coloradans who had reported being treated unfairly while seeking health care found the experience to be stressful. (Read more: Health Hazard.)

Note: Experiences specific to people of color for these data were not available at this level of granularity, due to data limitations. The CHAS data in this brief make it clear that people of color experience discrimination within the health care system, an ongoing challenge that needs to be addressed.

Policymakers and providers are taking steps to reduce discrimination in the health care setting, including through recently passed legislation to advance this work. While that’s a good start, providers can take additional steps to promote more diverse and inclusive care. Download the brief to read: 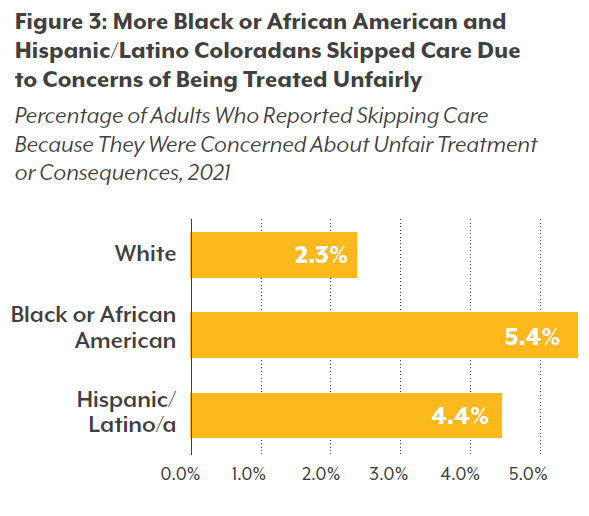 All Coloradans should be able to access health care without fear of being treated disrespectfully. But these CHAS data suggest that people of color in Colorado are having health care experiences tied to their race and ethnicity that can affect their health and access to care. These experiences are a manifestation of a long history of institutional and structural racism in the health care system.

Building a more equitable health care system requires acknowledging and addressing this history and reducing racism and bias among providers. Culturally competent and equitable care can improve health equity and build trust between people of color and health care providers.

Health care institutions, policymakers, educators, providers, and community-based organizations and funders all have a role to play in improving the experiences and health of Coloradans of color.

The Colorado Health Access Survey (CHAS) is the premier source of information about health insurance coverage, access to health care, use of health care services, and the social factors that influence health in Colorado. The biennial survey of more than 10,000 households has been conducted since 2009. Survey data are weighted to reflect the demographics and distribution of the state’s population. The 2021 CHAS was fielded between February 1 and June 7, 2021. The survey was conducted in English and Spanish. New questions were added to the 2021 survey to capture the impact of the COVID-19 pandemic as well as the impact of telehealth, social factors, and other topics.

Tynaje is a CHI intern and a practicum student from the Colorado School of Public Health. She just completed her first year of classes, focusing in Health Systems, Management, and Policy.