Pride and Some Progress

Lesbian, gay, and bisexual (LGB) Coloradans navigate the same health care system as straight Coloradans — but they encounter unique obstacles to getting care, according to new data.

The 2017 Colorado Health Access Survey (CHAS) shows improvement in some areas for the state’s LGB residents. The percentage without health insurance has dropped by more than half in the past four years, for example. And LGB residents are more likely to see a doctor for preventive visits than straight Coloradans.

But large challenges remain, particularly in mental health. LGB Coloradans report much higher rates of poor mental health than their straight counterparts, and are less likely to access the mental health care they need. 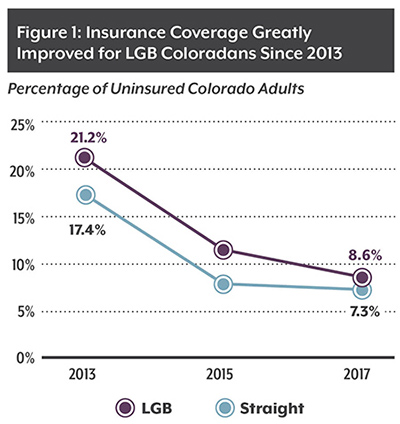 The Affordable Care Act (ACA) has mandated similar protections for people who identify as lesbian, gay, bisexual or transgender (LGBT) since January 2014.

Those policy changes, along with expanded Medicaid eligibility under the ACA, have made a difference. Now, 91.4 percent of LGB Coloradans are insured, just 1.3 percentage points lower than the 92.7 percent of straight Coloradans with health insurance.

In fact, the percentage of uninsured adult LGB Coloradans has been cut by more than half — dropping from 21.2 percent in 2013 to 8.6 percent in 2017. (See Figure 1.) That means an estimated 17,000 members of the LGB community gained insurance over that time.

But the ACA and other federal and state policies can’t prevent bias in the doctor’s office. One of five LGB Coloradans (20 percent) report feeling that a provider or health care staff judged them unfairly or treated them with disrespect — more than double the nine percent of straight Coloradans who felt the same.

Poor experiences with the health care system may have a negative impact on physical and mental health outcomes for the LGB population.1 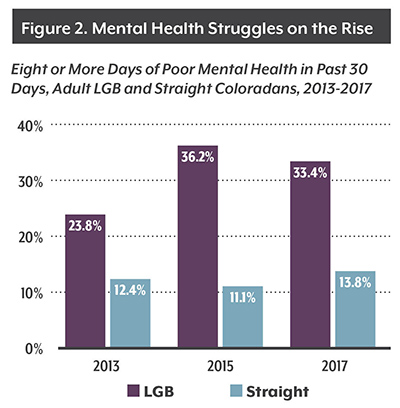 Even with improvement in health insurance coverage, access to mental health care has not improved.

The ACA has protections for people who need mental health care. The law requires mental health and substance use treatment to be covered as an essential health benefit. (Some plans from larger employers are excluded from this requirement).2

And the Mental Health Parity and Addiction Equity Act, passed in 2008, requires covering all psychological conditions at the same level as physical conditions. This applies to all public insurance plans and all private plans that offer behavioral health as an essential benefit.

Even with these policies, fewer LGB Coloradans are getting the mental health care they need.

People in the LGB community often use the health care system differently than members of the straight community.

About one of three LGB Coloradans (32 percent) do not have a usual source for physical health care compared with 20 percent of their straight counterparts. Not having a usual source of care may be a sign that LGB Coloradans have a harder time finding a provider who they feel comfortable with seeing more than once or twice.

Though they are less likely to have a usual source of care, LGB Coloradans report seeing general doctors and specialists at the same rate as their straight counterparts. However, they visit the emergency room at double the rate of heterosexual Coloradans, often because it was more convenient.

LGB Coloradans do well in getting preventive care, with 94 percent reporting that they had seen a general doctor in the past 12 months for a preventive visit compared with 86 percent of the straight population.

But the experiences of the LGB community are not always aligned with how Colorado providers report feeling about treating LGB patients.

One Colorado, a statewide advocacy organization for LGBT Coloradans, asked physicians about how they treat LGBT community members.

The 2013 report found that 76 percent of Colorado providers think it is important to know the sexual orientation of their patients. And nearly 98 percent of physicians reported being comfortable with treating LGBT patients.4 Yet, the latest CHAS data show that 20 percent of LGB Coloradans feel they were treated or judged unfairly by someone working in the health care system. 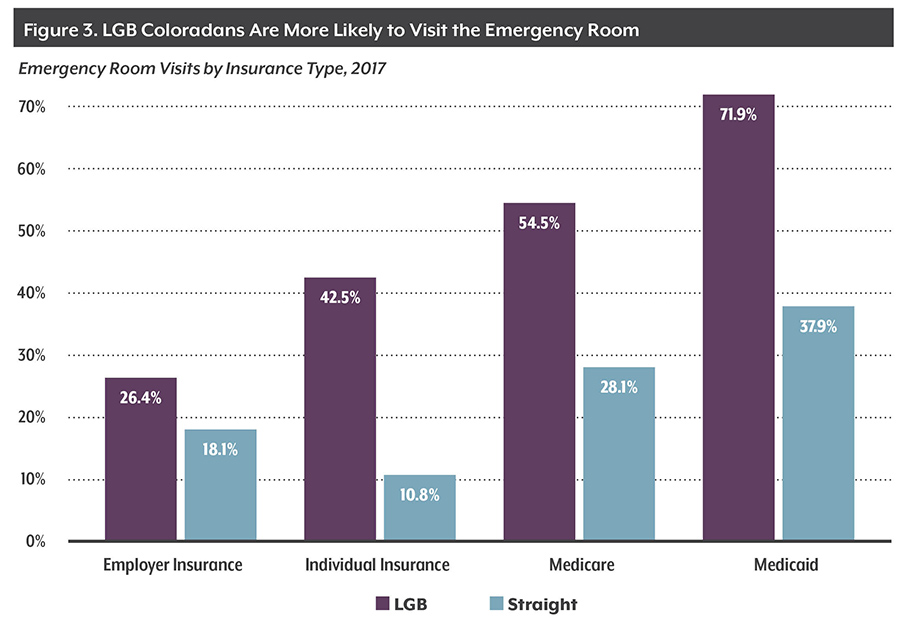 An important factor in accessing health care is the ability to afford it, even for those with health insurance.

The CHAS asks questions about how the cost of health care affects access and satisfaction. A higher rate of LGB Coloradans reported not getting a prescription or receiving doctor or specialist care because of cost compared with straight Coloradans.

But when it comes to insurance, the two groups are equally satisfied with its cost. About 70 percent of both LGB and straight Coloradans were satisfied with their premiums.

This is a positive sign that insurance companies do not appear to be restricting health insurance access or coverage for LGB Coloradans.

Getting access to health coverage and health care for more LGB Coloradans is a first step in improving health outcomes for this population.

What's in a Name?

The CHAS in 2013 began asking adult respondents whether they are straight, gay, lesbian, bisexual or something else. While we refer to the LGB population in this paper, keep in mind that this group includes additional Coloradans who don’t identify as either straight, gay, lesbian or bisexual.

The CHAS does not ask about gender identity, so we have no data on respondents who identify as transgender. The CHAS also doesn’t ask the respondent whether other members of their household — including children — are straight, gay, lesbian, bisexual or something else.

Still, the survey question is providing important data. The number of Colorado adults who tell us they are LGB has increased 33 percent since the 2013 survey, which projects to a total Colorado LGB adult population of more than 230,000 people in 2017. That number generally agrees with estimates by other groups.