Impacts of the Affordable Care Act

Understanding How the Law Has Changed Coverage and Costs in Colorado
Published: February 21, 2017 | Updated: October 20, 2017
Health Coverage and the Uninsured
Legislation and Policy

Twitter
Affordable Care Act expanded insurance in Colorado, though not as planned.

The Affordable Care Act (ACA) has served as the main vehicle to expand health coverage in Colorado and nationwide for the past six years. But its days may be numbered as a Republican Congress and President Donald Trump work to repeal it.

The Colorado Health Institute is monitoring and studying the future of the ACA and proposals to replace it, with an eye toward how the changes would affect Colorado.

This first report provides an understanding of what the ACA has done in Colorado when it comes to health insurance and the cost of coverage. These baseline measurements can serve as a tool to evaluate how the ACA compares to various options to replace it.

The ACA has driven change in Colorado’s health care landscape since it became law in 2010. Perhaps its most visible impact has been an historic drop in the uninsured rate. Just 6.7 percent of Coloradans did not have insurance in 2015, according to the Colorado Health Access Survey (CHAS), down from 14.3 percent in 2013 — the year before the ACA’s major provisions took effect.

Today, an estimated 500,000 Coloradans are receiving coverage because of the ACA — about 400,000 through expanded eligibility for Medicaid and another 100,000 through subsidies to buy private insurance through Connect for Health Colorado, the state’s online marketplace. Young people and low-income earners saw the largest coverage gains and are the Coloradans most at risk if the law is repealed.

In addition to coverage expansions, the ACA contains multiple initiatives and features, some of them less well known than others. For example, Colorado’s $65 million State Innovation Model to integrate primary and behavioral health care came from the ACA. This report looks specifically at the ACA’s effects on health insurance coverage in Colorado — its successes and shortcomings.

The law’s most obvious effect in Colorado has been on health insurance coverage.

Colorado’s Medicaid expansion exceeded expectations, while the state-based exchange fell short of goals set by ACA supporters. Economist Jonathan Gruber, a prominent ACA backer, predicted in 2011 that the law would reduce the number of uninsured Coloradans by 450,000 — a prediction that proved to be fairly accurate. However, Gruber projected a more modest increase in Medicaid of 260,000 while projecting that 500,000 people would buy private insurance on the state-based exchange. We now know that Medicaid expansion was far more influential in lowering Colorado’s uninsured rate than the exchange. By the end of 2016, about 180,000 Coloradans had bought and paid for insurance policies through the exchange, and about 104,000 of them received federal subsidies to help pay for their coverage.

The major features of the ACA took effect in 2014. The law mandates that everyone have health insurance, forbids insurance companies from charging more or denying coverage to people with pre-existing health conditions, and offers income-based subsidies to purchase coverage on an insurance exchange. It also offers states funding to expand their Medicaid membership.

Children fared especially well. The under-18 uninsured rate plunged to 2.5 percent from seven percent in 2013.
Medicaid expansion accounts for most of Colorado’s coverage gains. About 400,000 Coloradans signed up for Medicaid after becoming eligible through the ACA, bringing the state’s Medicaid membership to 1.3 million. Meanwhile, Colorado experienced a small drop in people who were insured through an employer, part of a continuing national trend of diminishing job-based

Table 1. Medicaid Eligibility Before and After the ACA 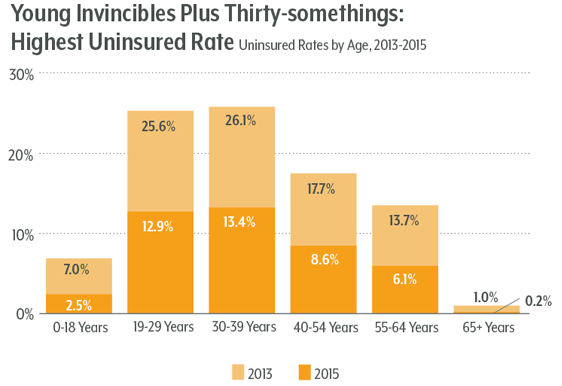 Groups with the Largest Improvements

By age: The largest coverage gains coinciding with the ACA were made by young people and those with lower incomes. Recipients of the ACA’s coverage benefits tend to live in Denver and rural southern and western Colorado.

All age groups saw declines in their uninsured rates since the pre-ACA days, but those under 30 had the largest drops. Even so, adults under 30 — the “young invincibles” — remain the largest group of uninsured Coloradans, and adults in their 30s also have lower insured rates than kids or older adults 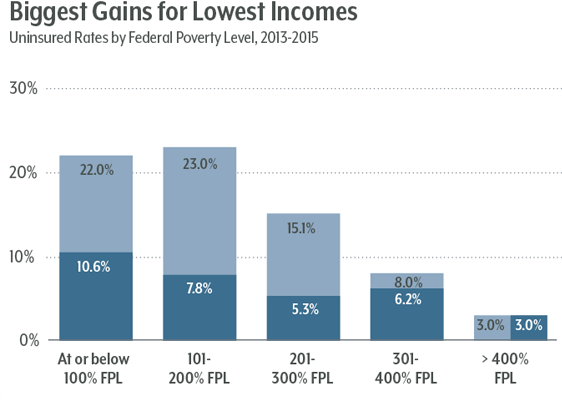 By income: Low- to middle-income Coloradans have seen the greatest coverage gains in the ACA era. (See Figure 3.) People between 100 percent and 300 percent of the poverty level ($24,600 to $73,800 for a family of four) had the largest gains in insurance. Some 10 percent of Coloradans below the poverty level remained uninsured in 2015, even though this group should be eligible for Medicaid. However, it’s likely that this group includes a sizeable part of Colorado’s undocumented population, which is ineligible for Medicaid. The Colorado Health Institute estimates that 112,000 undocumented immigrants in Colorado lack coverage.

Other ACA effects on insurance

The ACA had wide-ranging effects on health coverage beyond Medicaid and the individual market.

Colorado’s Medicaid expansion was larger and costlier than ACA advocates predicted when the act passed. Expansion costs totaled $1.6 billion in the first two years, even though the legislature’s fiscal experts projected just $1.2 billion in spending.

Almost all the costs so far have been borne by the federal government, which paid 100 percent of the tab for the expansion population through 2016, with the share set to reduce to 90 percent by 2020.

CHI estimates Colorado will be spending $222 million annually for Medicaid expansion by 2020 — covering both its 10 percent share for the expansion group and half the costs for those who were eligible before the ACA but had not signed up. Under current state law, all of Colorado’s costs for the expansion population will be paid from the Hospital Provider Fee, not the state general fund.

Colorado would be in a bind if Congress removed the enhanced federal match and returned to the traditional 50/50 split on Medicaid between the federal government and the states. The move would impose an additional $780 million cost on the state in the next fiscal year — roughly the legislature’s entire general fund budget for higher education. It is unlikely that Colorado would be able to keep covering its expanded Medicaid population if Congress removed the enhanced federal match. 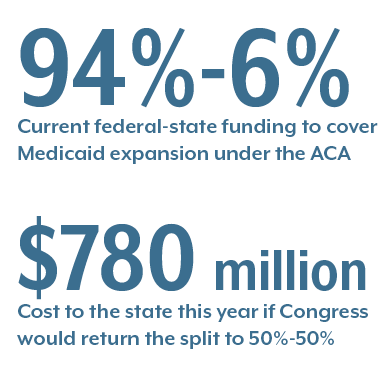 94%-6%: Current federal-state funding to cover Medicaid expansion under the ACA

Prior to the law, there was no way to compare prices of similar insurance products. The ACA’s online marketplaces and metal tiers — which categorize plans by their quality, from bronze up to platinum — give consumers an easy way to shop based on price. These features also make it possible to track trends in prices and the number of plans offered.

Insurance companies that do business in Colorado greeted the ACA with a wave of enthusiasm and price-cutting. However, many carriers suffered losses on the individual market, and the number of plans has dropped while the average price has risen. Rural Colorado, especially the Western Slope, suffers from a lack of insurance carriers and high premium prices — likely a result of the higher costs charged by medical providers in those regions.

It’s not possible to compare individual market prices before and after the ACA because of the lack of comparable data before 2014. However, national statistics show that growth in insurance premiums slowed slightly after the ACA was passed, even though they continue to rise.

The ACA is responsible for a large expansion of health coverage in Colorado.

Medicaid expansion gets most of the credit for the drop in the uninsured rate, although subsidies offered through the health insurance marketplace played a part as well.

Costs to the state of Colorado so far have been minimal, but they are projected to increase as the federal share for covering the Medicaid expansion population shrinks from now until 2020.

The ACA created a way for consumers and researchers to compare insurance prices on the individual market. Consumers saw discounted prices the first few years of the ACA followed by steep price increases. The ACA did not cause these increases, but it also has not curbed the trend of rising costs for health care and health coverage.

This mixed legacy — increased coverage but also a failure to rein in costs — forms the backdrop of the debate over the law’s fate, and any potential replacement plans will have to take this legacy into account.