The U.S. Senate’s latest version of a bill to repeal and replace the Affordable Care Act (ACA) would cost Colorado billions of dollars in federal funding, according to four national studies.

Taken together, it’s nearly certain that this amendment would lead to a substantial drop in health coverage in Colorado, along with a loss of federal funding. ACA programs that provided coverage for more than half a million Coloradans would be repealed in 2020, with an uncertain replacement.

The major new feature of the Graham-Cassidy plan is called a Market-Based Health Care Grant Program in the draft. Under this idea, the ACA’s Medicaid expansion and private market subsidies would end, and most of the funding would be put into the new grant program.

States would be funded initially based on the number of their low-income residents (those making 50 percent to 138 percent of the federal poverty level). In the last three years of the grant, some state funding would be based on how many people in this low-income group have health coverage, an incentive for states to ensure that most low-income residents are covered.

States could use the grants to expand health coverage in a number of ways. However, the Graham-Cassidy amendment bases its funding on coverage for low-income people, so it’s likely states would concentrate their efforts on this group. The funding formula has no specific incentive for states to offer aid to the middle class, which has been hit with double-digit increases in the price of insurance the past few years. States would have little time to create their systems. The deadline to apply for 2020 grants would be March 31, 2019.

In 2027, funding for the Market-Based Health Care Grant Program would end, and Graham-Cassidy does not contemplate replacement funding.

For a more detailed look at the amendment, see the Colorado Health Institute’s updated matrix comparing the ACA, the current version of the ACA repeal bill as passed by the U.S. House, and the Graham-Cassidy amendment.

Projected Effects on Funding for Colorado

Five national groups have modelled the state-by-state effects of the Market-Based Health Care Grant Program and per-capita allotments for Medicaid. The studies come from the Center on Budget and Policy Priorities, which is a left-leaning policy analysis group; the Centers for Medicare and Medicaid Services (CMS), which conveys the Trump Administration’s official figures; the Kaiser Family Foundation, which is a national research institute; and two business consulting groups — Avalere and Manatt.

All four studies project that most states — including Colorado — would lose money. The distribution formula favors states that chose not to expand Medicaid under the ACA. Projected losses range from $125 million a year in the grant program’s first year to $6 billion a year or more after the grant ends.

Projections of the studies vary because they analyze different timeframes, and Graham-Cassidy’s complicated formula requires forecasters to make assumptions on the choices all 50 states will make and how those choices interact.

Table 1 shows the conclusions of each study for Colorado. 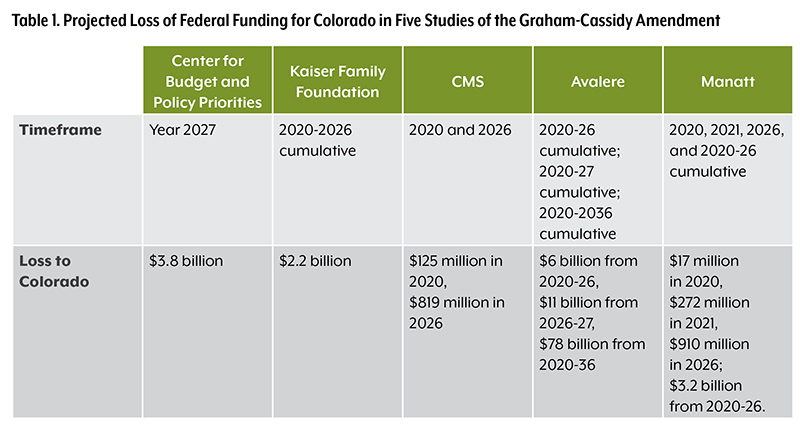 Although the numbers differ, the studies point to the same conclusion: Colorado would lose federal funding under the Graham-Cassidy plan, and the losses would grow dramatically in the year 2027.