Eligible but Not Enrolled 2019

NOTE: An earlier version of this report cited an administrative change to the Department's returned mail policy as a possible cause for decreased enrollment. This conclusion was in error and has therefore been removed.

The number of people who were eligible but not enrolled (EBNE) in three health coverage programs – Health First Colorado (the state’s Medicaid program), the Child Health Plan Plus (CHP+), and advance premium tax credits (APTC) – was on the rise even prior to the COVID-19 pandemic. Considering Medicaid alone, data collected from safety net clinics suggest that immigration policy and administrative changes to the program were some of the primary drivers of the gradual decline in enrollment since 2016.

In 2019, nearly 265,000 Coloradans were EBNE in these three insurance programs. Of that number, over 84,000 eligible working-age adults did not sign up for Medicaid, more than the previous three years. More than 135,000 adults were not enrolled in APTCs in 2019. That year also saw a slight increase in the number of children who were EBNE — up to nearly 36,000 — for Medicaid and CHP+. A large proportion of children who were EBNE for public insurance were Hispanic or Latinx, representing a gap in access to care that could result in poor health outcomes.

Given the current trends and fallout from the pandemic, such as job loss, it is expected that 2020 data will reveal that the EBNE population increased further. The 2020 data will be available in spring 2022 and will quantify the impact of the pandemic on enrollment in public insurance and APTCs.

An Upward Trend in EBNE Rates

There could be many reasons why those who are eligible for these programs do not take advantage of them. Cost could be one such barrier. Even with the assistance of tax credits, the cost of an insurance policy through the marketplace might still be too great. Lack of awareness can also be a barrier. According to the Colorado Health Access Survey, of those Coloradans who were uninsured in 2019, nearly one in five (18.8%) did not know how to get insurance.

Eligible but not enrolled estimates reflect the number of Coloradans who met eligibility criteria for Medicaid, CHP+, or APTCs but were not enrolled or accessing the benefits. CHI developed the EBNE estimates using these sources:

CHI developed a method for estimating the likelihood that someone was an immigrant without legal documentation, since there is not an official count of this population in Colorado. This method is based on findings from a 2006 Pew Hispanic Center report (See the “Methods and Limitations” document).

Interpretation of EBNE Rates and Estimates

An Increase in Medicaid EBNE Rates for Adults

The number of Colorado adults ages 19 to 64 who were EBNE in Medicaid increased for the first time since 2016 (see Table 2). This represents 84,000 adults who were not accessing available coverage in 2019.

Adults between the ages of 19 and 25 accounted for about 34% of those EBNE in Medicaid in 2019. Part of this could be because these Coloradans are young and don’t think they need coverage.  Nearly one in three (30.9%) uninsured Coloradans in this age group reported they did not have coverage because they did not need insurance.  In 2019, 136,000 adults were EBNE in APTCs. These adults were more likely to be between 26 and 34, with 31.6% in this age range. This finding is consistent with high overall rates of uninsurance among this age group: In 2019, 10.6% were uninsured compared with the state average of 6.5% — representing a gap in access to coverage based on age. 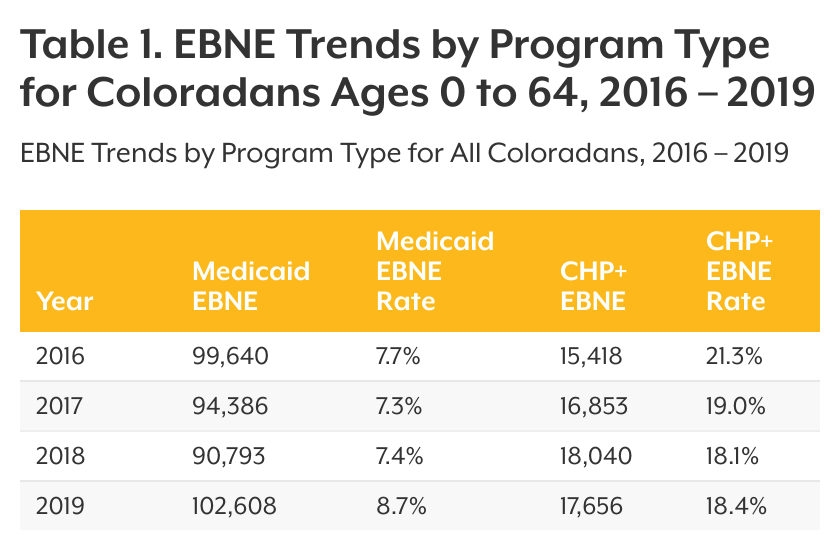 Young adults are more likely than older adults to avoid care due to cost.  According to the 2019 Colorado Health Access Survey, 95.7% of uninsured adults ages 19 to 44 reported they did not have insurance because it was too expensive. Even with financial assistance of tax credits, many young adults in Colorado may not be able to afford health insurance. They also might not know how to get coverage. Over one in five (20.9%) uninsured adults age 19 to 44 reported they did not have coverage because they did not know how to get insurance, which could reveal a gap in knowledge about insurance assistance programs.

There was a small increase from 2018 to 2019 in the number of EBNE children in Medicaid, up to about 18,200, and a slight decrease for CHP+ at nearly 17,700 (see Table 3). Additionally, 8,600 children were EBNE in APTCs in Colorado. Connect for Health Colorado began reporting APTCs differently for its member populations in 2020, so these values can no longer be tracked over time. 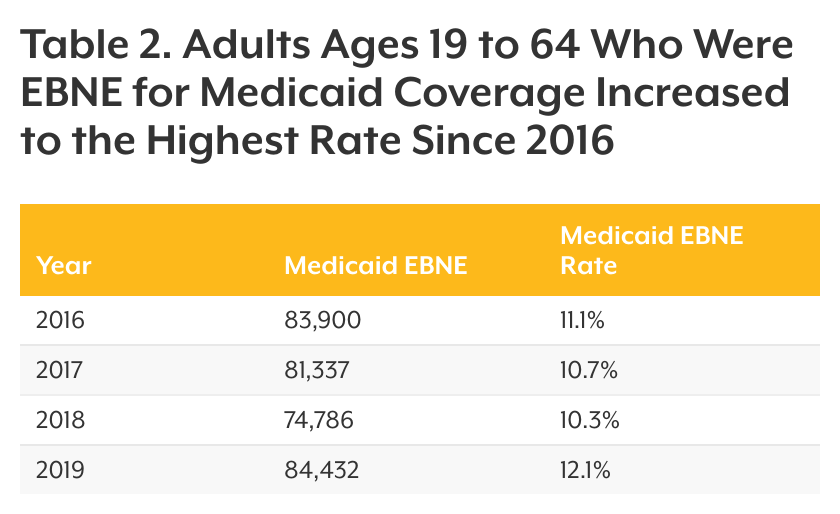 Most children who were EBNE in Medicaid in 2019 were Hispanic or Latinx (50.7%), which was similar to 2018 (56.3%). It is likely that immigration politics in 2018 and 2019, including the public charge policy, had a chilling effect that made families of immigrants reluctant to enroll in government programs. (See the “2017-2018 EBNE: Momentum Reverses” report for more details.)

Hispanic or Latinx children are more likely to be uninsured compared with other race or ethnic groups. In 2019, 7.9% of Hispanic or Latinx children ages 0 to 18 were uninsured; the state average is 4.3%.  Supporting providers who are trusted sources of health care in immigrant communities to do outreach and engagement may be one way to increase enrollment and access to health care coverage. 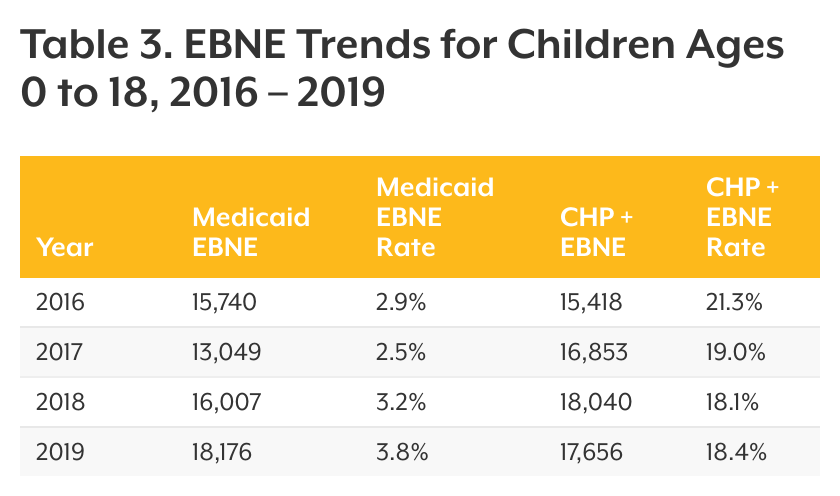 Medicaid Enrollment Varied Across the State

There was variability in EBNE rates across Colorado counties in 2019. Some counties varied significantly from their neighbors (see Map 1). For example, in some central mountain counties such as Pitkin and Eagle, about a third of adults were EBNE in Medicaid (33.3% and 34.5%, respectively). Some neighboring counties, like Chaffee and Park counties, had less than a tenth of their eligible adult population not enrolled (7.0% and 7.3%, respectively).

Who Were the Other Uninsured Coloradans?

But Wait… How Many Uninsured Coloradans Are There?

Data from the 2019 Colorado Health Access Survey (CHAS) show about 361,000 uninsured Coloradans. The 2019 ACS, used in this analysis, estimates about 460,000 Coloradans don’t have health insurance.

What accounts for this gap?

These surveys are both from 2019, but they use different methodologies. For example, the ACS has a larger sample size, but the CHAS includes more confirmation questions to accurately determine respondents’ insurance status. The ACS is used in this analysis because its larger sample allows for county-level estimates and its detailed demographic profiles allow for the most accurate estimates of the eligible population.

The number of EBNE Coloradans has shifted in recent years at an increasing rate — meaning more people going without insurance assistance or enrollment in public insurance programs for which they qualify. Many of those who go without available health insurance are younger adults and children who are Hispanic or Latinx, and without preventive care they may experience poor health outcomes later in life. There were also vastly different Medicaid EBNE rates for adult Coloradans based on where they lived in the state. Strategies for reaching and enrolling these populations will differ by communities depending on who is eligible and who is hard to reach.

This report uses 2019 data, which means it cannot be used to analyze changes due to the COVID-19 pandemic. Early analysis predicted a large wave of over 500,000 newly eligible Coloradans enrolling in the state’s Medicaid program.  The anticipated 2020 eligible but not enrolled analysis — which will be published in spring 2022 — will help stakeholders understand the full impact of the pandemic on job loss and increases in the number of Coloradans enrolled in or eligible for public insurance and assistance programs.