Medicaid Surge Due To COVID-19: Financial Impacts for Hospitals

Colorado’s hospitals are on the front lines of the state’s COVID-19 response. With other health care and public health organizations, hospitals are leading efforts to test for and treat the disease.

But the financial repercussions for hospitals won’t stop there. The pandemic has precipitated an economic crisis that will cause additional, longer-term challenges as health coverage shifts, cutting hospitals’ revenue after COVID-19 has already shocked their finances.

Colorado’s Medicaid department is projecting well over half a million (563,000) more Coloradans will enroll in Medicaid between April and December. This would be the biggest surge in Medicaid enrollment in Colorado’s history, larger at its peak than the 2014 expansion of Medicaid through the Affordable Care Act (ACA).

While ACA expansion was a financial boon for hospitals because it converted many formerly uninsured patients into paying customers through Medicaid, the 2020 Medicaid surge will have the opposite effect. Most of the expected new Medicaid members formerly had employer-sponsored insurance, which reimburses hospitals at a much higher rate than Medicaid. When those patients need hospital care, Medicaid will pay for that care at a significantly lower rate than private insurers. 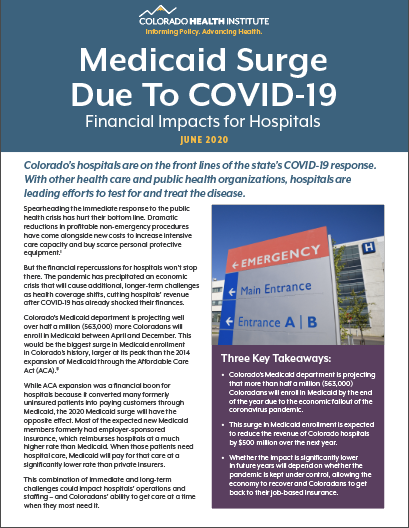 This combination of immediate and long-term challenges could impact hospitals’ operations and staffing – and Coloradans’ ability to get care at a time when they most need it.

Estimating the Impact of the Surge

Whether the impact is significantly lower in future years will depend on whether the pandemic is kept under control, allowing the economy to recover and Coloradans to get back to their job-based insurance.

The projected $500 million hit is not as dramatic in the context of the $3 billion in net income hospitals earned in 2018. But hospitals are not operating under 2018 conditions. Much of that margin was driven by investment income that will also be affected by the economic fallout of the crisis. The Colorado Hospital Association (CHA) estimates hospitals will lose another $1.2 billion in revenue from canceled non-emergency procedures due to COVID-19. In that context, the projected $500 million revenue drop from the Medicaid surge is more significant.

Certain hospitals are less able to weather the combined effects of the public health and economic crises. Those in rural areas or those that treat a higher proportion of Medicare and Medicaid patients generally operate with lower margins and cash reserves. According to CHA, 45 days without elective procedures would push five additional hospitals below a 4% margin, meaning about two-thirds of Colorado’s 81 general and acute hospitals would be considered at-risk financially.

Colorado’s 2014 expansion of Medicaid eligibility will temper the impact of the recession on hospitals and patients. In states that have not expanded coverage, many who have lost their job-based insurance will be pushed into being uninsured. Colorado hospitals will also receive significant federal relief funding to counter the direct effects of the pandemic on their finances. But some of the most vulnerable hospitals may see the least relief. A national analysis by Kaiser Family Foundation found federal funding through the Coronavirus Aid, Relief, and Economic Security (CARES) Act; the Paycheck Protection Program; and the Health Care Enhancement Act favored hospitals that treat a lower proportion of Medicaid and Medicare patients, which are more likely to be for-profit and tend to have higher operating margins.

The Colorado Department of Health Care Policy and Financing (HCPF) is projecting the surge in Medicaid enrollment will peak in December 2020, followed by a steep, partial decline in early 2021 as requirements included in another federal relief bill, the Families First Coronavirus Response Act, expire.

The act provided extra federal funding to states for Medicaid, but to receive it states had to commit to not imposing any new eligibility restrictions (the maintenance of effort requirement) and not disenrolling any beneficiaries who were either enrolled at the start of or during the emergency period starting in March (the continuous coverage requirement).

If disenrollment is slow to materialize as the economy recovers, or if another outbreak of COVID-19 causes a second disruption to the economy and surge in enrollment (see Figure 1), hospital revenue could be reduced by more than the projected $500 million.

Colorado Option Was Small in Comparison

The scale of the financial impact of COVID-19 and the subsequent surge in Medicaid enrollment on hospitals is expected to exceed the projected cost of any recently passed or introduced legislation aimed at reducing health care costs for consumers. At the start of 2020, for instance, the high cost of health care was a major concern for Colorado policymakers. Colorado’s hospitals were ready for battle over the bill to implement a version of a public insurance option proposal called the Colorado Option, which would have created a new plan on the individual market starting in 2022. The plan would have paid hospitals less than any other private plan but significantly more than Medicaid or Medicare pays.

CHI estimates that the creation of the plan would have likely cost hospitals annually less than a tenth
of what this Medicaid surge will likely cost. Assuming Colorado Option enrollment was similar to the now-defunct Colorado HealthOP, the last private plan on the market to significantly undercut existing rates, enrollment would have been well under 100,000 Coloradans.

Coloradans will still need relief from high health costs in coming years. But policymakers’ plans and proposals will need to take into account the new reality of consumers’ and hospitals’ finances after the health system stabilizes.

Models are not intended to be perfect predictions, but coronavirus models are less accurate than most. This projection is highly dependent on how the events of the next year unfold. A future spike in coronavirus cases necessitating a secondary stay-at-home period could further disrupt the economy, deepening the recession and increasing the financial hit to hospitals.

We will know more as time passes. Almost half a million Coloradans have already filed for unemployment as Colorado’s unemployment rate jumped to 11.3%, its highest rate ever, in April. Many of those, and their dependents, have lost their employer-sponsored insurance. The Kaiser Family Foundation estimates that in states like Colorado that expanded Medicaid through the ACA, more than half (57.5%) of those who become uninsured after job loss are eligible for Medicaid. Once state unemployment benefits expire for most people and that income is no longer counted against Medicaid eligibility, closer to three in four could enroll (74.7%).

CHI’s model also assumes a sharp drop in Medicaid membership at the beginning of 2021. As previously noted, the actual number could be lower if a slow economic recovery means Coloradans struggle to gain employment or if the federal government extends the emergency period.

Finally, the model assumes those losing Medicaid eligibility are returning to whatever coverage status they had before. But if a large number of Coloradans lose Medicaid and become uninsured rather than returning to their employer-sponsored insurance, hospitals could lose even more revenue.

What we know for certain is that the coronavirus and its impacts are not going away soon. Hospitals will need to adapt to periods of lower demand and treating more patients without private insurance coverage. Policymakers are keenly aware of the direct impact this pandemic is having on hospitals, but they should also be aware of potential indirect impacts — such as revenue losses when privately insured patients move to Medicaid — when weighing future legislative priorities.