Colorado Children's Access to Care Index: A Child-Sized Step in the Right Direction

This index focuses on the ability of Colorado's children to access health care. It is one of a series of indices developed by the Colorado Health Institute to measure access.
Published: November 14, 2015 | Updated: April 4, 2017
Access to Care

Colorado’s children are finding it easier to access health care, according to the Children’s Access to Care Index. The index score increased to 8.4 in 2015 from 8.1 in 2013, both out of a possible 10 points. The new score is a “child-sized” step in the right direction.

The increase in the score coincides with the rollout in 2014 of major provisions of the Affordable Care Act (ACA). While the ACA did not place a specific focus on children’s coverage, many kids likely gained health insurance as their parents enrolled through Medicaid or other ACA provisions.

CHI and CCMU launched the children’s index in response to community interest in child-specific data. The index is designed to inform policy discussions that are shifting from whether people have health insurance coverage to whether they have access to the health care they need. This is the first children’s index, but 2015 data are compared with 2013 data in order to assess changes over time. The overall score is based on three components of access: Potential Access, Barriers to Care and Realized Access. 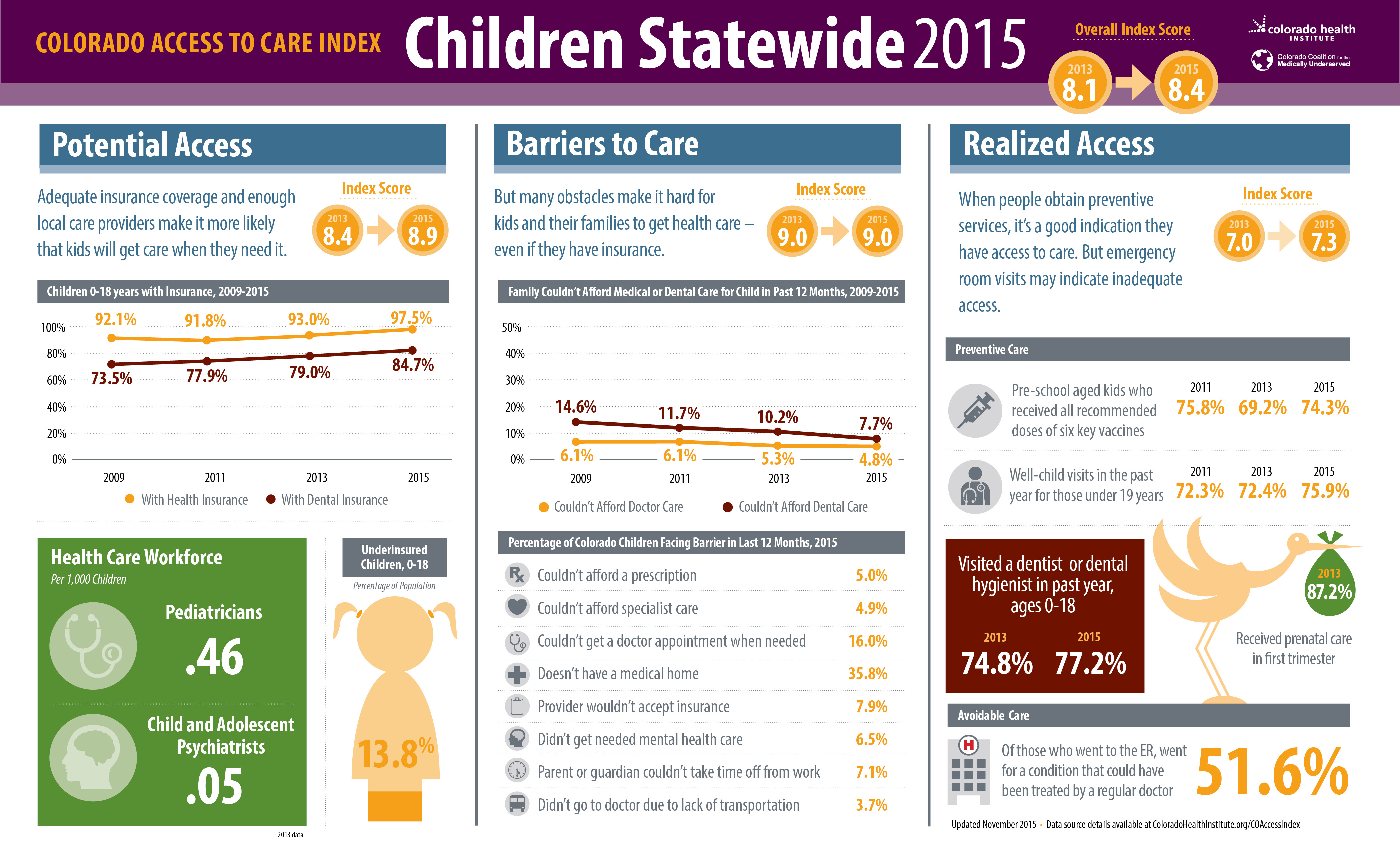 Indicators in the Potential Access category are the building blocks of adequate access to care. The score in this category increased to 8.9 in 2015 from 8.4 in 2013, the largest increase among the three categories.

The rate of dental insurance climbed to 84.7 percent from 79.0 percent. As their parents became eligible for Medicaid because of an expansion in eligibility under the ACA, many children became insured.

At the same time, though, the percentage of underinsured children increased from 11.4 percent to 13.8 percent, mirroring the adult population. When it comes to providers caring for children, Colorado has 0.46 pediatricians for each 1,000 children. This places Colorado near the national benchmark for an adequate level of pediatricians. Colorado has .05 child and adolescent psychiatrists per 1,000 children.

This is also in line with the national benchmark, although families often report difficulty obtaining psychiatric care for their children or adolescents, especially in rural and mountainous areas.

The Barriers to Care section measures how difficult it is to access health care. A higher score suggests fewer barriers. The score for this category in the children’s index was 9.0 in 2015, unchanged from 2013.

But logistical barriers, such as transportation or the ability of parents to take time off work, increased.

And there was an uptick in the percentage of children who weren’t able to get a medical appointment when they needed one, climbing to 16.0 percent in 2015 from 13.4 percent in 2013. The influx of insured children may have strained the health care system.

Realized Access indicators measure whether a child actually sees a health care provider. This score climbed a bit to 7.3 in 2015 from 7.0 in 2013.

While each indicator in this category moved in a positive direction, preventive care visits didn’t increase as much as had been anticipated given the increase in health and dental insurance.

Under potentially avoidable care, another part of this section, the percentage of kids who went to the emergency room (ER) for a condition that could have been treated by a regular doctor fell to 51.6 percent from 53.8 percent. Still, kids visit the ER at a much higher rate than the adult percentage of 37.8 percent.

The fact that access to health care improved for Colorado children in 2015 is a welcome development.

Understanding whether the higher rates of medical and dental coverage are translating into children’s access to care is more important than ever. Decision-makers will face important questions about children’s health care in the next year or two.

First, should the Children’s Health Insurance Program — called the Child Health Plan Plus (CHP+) in Colorado — be authorized to continue? The program, providing coverage to 48,846 children and pregnant women, is funded by the federal government only through 2017.

Second, the Colorado legislature devoted $5.3 million to school-based health centers in Colorado beginning in 2013. Are we beginning to see the impact of this investment?

Finally, advocacy organizations across Colorado have invested in numerous activities to get kids enrolled in health insurance over the past five years. Will these activities be refocused now that the insured rate has reached such high levels?

The next Colorado Children’s Access to Care Index in 2017 will help to answer these questions.

The Children’s Access to Care Index is based on five data sources outlined below. All data are for children between the ages of 0 and 18 years old unless noted otherwise. More information about each data source can be found by following the links in the box on the last page.

What It Is: The Colorado Health Access Survey – the CHAS – is the premier source of information on health insurance coverage, access to health care, and how health care is used in Colorado. More than 10,000 randomly selected households participated in the 20-minute survey. The data are statistically weighted to be representative of the state’s population. The CHAS is fielded, analyzed and managed by the Colorado Health Institute. It is funded by The Colorado Trust.

• Children with or without health insurance at the time of the survey.

• The CHAS defines adequately insured as those who had coverage for all of the 12 months prior to the survey, did not meet either of the two out-of-pocket cost definitions of underinsurance, and did not have an uninsured family member.

• Children with or without dental insurance at the time of the survey.

• Did not get needed specialist care due to cost.

• Did not get needed dental care due to cost.

• Parent told by the doctor’s office they weren’t accepting patients with child’s type of health insurance.

• Needed mental health care or counseling but didn’t get it at that time (for those between the ages of 5 and 18 years old).*

• Parent or guardian did not seek an appointment for the child because child was uninsured.*

• Visited a dentist or dental hygienist in the past 12 months.

• Had a well-child visit (visit for a check-up, physical examination or other preventive care) in the past 12 months.

• Of children who visited a hospital emergency room in the past 12 months, those who went for a condition that could have been treated by a regular doctor if one had been available.

• The Colorado Health Access Survey is conducted every other year. The complete survey form is available here.

• The “Parent or guardian did not seek an appointment for the child because child was uninsured” indicator should be interpreted with caution. Because the denominator – the number of uninsured children – has become smaller after the implementation of the Affordable Care Act (ACA). The estimate has a larger margin of error.

What It Is: A database of practicing providers across Colorado.

Time Points: MedicalQuest data from 2013 were used for the Children’s Access to Care Index.

MedicalQuest provides an estimate of practicing providers. The Colorado Health Institute calculated rates of providers per 1,000 children between the ages of 0 and 18 years old using MedicalQuest data and state population estimates from the Colorado Demography Office.

Due to changes in MedicalQuest data collection methodology, 2015 data were not available at the time of the children’s index release. Because we do not anticipate major changes in the workforce between 2013 and 2015, we felt it was reasonable to hold these data points constant at 2013 values for the 2015 time period.

In order to calculate a score for the workforce indicators we compared Colorado provider to population ratios to the Solucient published benchmark, which can be found here.

What It Is: The Colorado Child Health Survey is an annual survey of 1,000 children between the ages of 1 and 14 years old. The survey contacts parents of young children who responded to The Behavioral Risk Factor Surveillance System (BRFSS) and indicated they would be willing to complete the Child Health Survey. The survey covers a range of topics including physical activity, nutrition, access to health and dental care, behavioral health and others. The survey is administered by the Colorado Department of Public Health and Environment and was initiated in 2004.

• Does not have a medical home

• A child is considered to not have a medical home if the answer is ‘no’ to any of the following questions:

Does the child have a personal doctor or nurse? Is getting needed referrals for the child a problem?

Does the child have a usual source of sick and well care? Did the child receive all care coordination needed?

Does the child have family centered care?

The Child Health Survey only includes children between the ages of 1 and 14 years old, as opposed to the majority of other indicators which include children up to 18 years old. The Children’s Index uses 2014 data in the 2015 time period because it is the most recent data available. Weighted frequencies are not available.

What It Is: The National Immunization Survey is used to monitor vaccination coverage among children 19-35 months old. Landlines and cell phones are randomly selected and called to enroll one or more age- eligible child into the survey. The survey is administered annually by the National Center for Immunizations and Respiratory Diseases (NCIRD) of the Centers for Disease Control and Prevention (CDC).

The Children’s index uses 2014 data in the 2015 time period because it is the most recent available data. Weighted frequencies are not available.

What It Is: The PRAMS is an annual survey funded by the Centers for Disease Control and Prevention (CDC) and administered by the Colorado Department of Public Health and Environment (CDPHE). The PRAMS is designed to monitor the experiences of Colorado women before, during and after birth. The survey is mailed to a sample of women who have recently given birth. The survey data are weighted to be representative of Colorado’s population of women who recently gave birth.

• Mother received prenatal care in first trimester of pregnancy Notes and Limitations: Due to the small sample size of the PRAMS, we averaged three years of data to calculate stable estimates.

The following criteria were used to select the metrics included in the Colorado Access to Care Index:

• Validity: Metrics of factors known to increase potential access to care, barriers to care identified by consumers, and services used that suggest adequate access or insufficient access to primary care.

• Subgroups: Metrics that demonstrate access to care for Coloradans with all kinds of insurance, in regions across the state, belonging to different racial and ethnic groups and at different income levels. Some metrics are only available for, or only applicable to, particular age groups.

• Available over time: Metrics that allow the index to be updated and show changes over time. Most data sources included are expected to be available in the future, although not all are available retrospectively.

• The Children’s Access to Care Index assumes that all metrics are equally important. We did not weight some metrics higher than others.

• Under Barriers to Care, the CHAS metric “Didn’t seek care because uninsured” was not included in the calculation of the index because its denominator — or population on which it is based — is limited to only uninsured children. This denominator has changed significantly over time with health coverage expansions under the ACA.

• We did not include some years of data for some metrics due to unavailability or a change in definitions that would compromise the comparability of the data across years.

Questions about the Colorado Access to Care Index may be directed to Jeff Bontrager at bontragerj@coloradohealthinstitute.org.

Jeff Bontrager is the director of research and evaluation at CHI.