More than 126,000 Colorado taxpayers chose to pay a tax penalty instead of getting health insurance in 2015, according to a new Colorado Health Institute analysis. 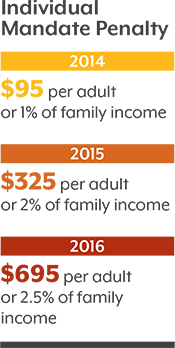 That equates to 4.8 percent of Coloradans who filed a tax return in 2015 — a percentage that is slightly above the national average of 4.4 percent.

The Affordable Care Act (ACA) requires most people to have health insurance. Those who don’t must pay a fine when they file their annual income taxes. (The ACA allows a number of hardship exemptions to avoid the mandate.) The law also provides incentives to get insured — either free coverage through expanded Medicaid eligibility or subsidized private insurance for people making less than four times the federal poverty level, which was about $47,000 for a single person in 2015.

The number of Coloradans who paid the penalty dropped in 2015 compared with the year before, when the major parts of the ACA took effect. The majority of the 126,000 who paid the penalty reported less than $50,000 income, meaning they likely would have qualified for free or cut-price health coverage.

However, for most people the penalty cost less than annual premiums for the cheapest available insurance plan, even with the subsidy.

Counties in rural Colorado, where insurance prices on the individual market are especially high, had higher rates of residents choosing to pay the penalty than the state average.

This analysis uses the Internal Revenue Service’s (IRS) Statistics of Income1 to find the number of Coloradans who paid the ACA penalty, their incomes and their county of residence. The IRS compiles Statistics of Income based on a sampling of individual income tax returns. ACA data are available from 2015 and 2015.

However, 2016 also was the beginning of dramatic price increases on individual market across the state. Premium prices in western Colorado were already among the highest in the country in 2014 and 2015. 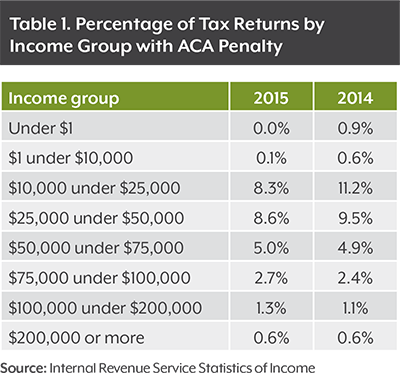 Most Coloradans Who Pay the Penalty Make Less Than $50,000

It was mostly people on the lower half of the income scale who paid the ACA mandate penalty in 2014 and 2015. (See Table 1.)

The IRS does not report income data at the same thresholds that are used to determine eligibility for Medicaid and premium tax credits. However, in general the Coloradans on the lower side of the income scale would qualify for Medicaid, while many of the rest would qualify for tax credits to reduce the price of private coverage. The cutoff for Medicaid is 138 percent of federal poverty level (FPL), or about $16,000 for an individual, and the cutoff for tax credits if 400 percent FPL, or about $47,000 for an individual in 2015. Family thresholds are higher.

Even with subsidies to make insurance more affordable, many Coloradans chose to pay the penalty because it was cheaper than paying premiums. The average monthly cost of a subsidized bronze plan for an individual in 2015 was $126, or $1,512 annually, according to Connect for Health Colorado.2 That would have been four times the 2015 mandate penalty of $325. 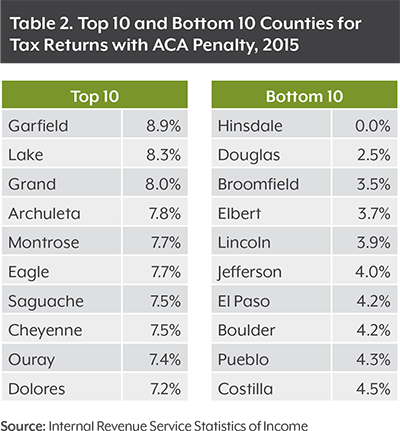 Eight of the 10 counties with the highest rate of penalty payers are on the Western Slope, which has the state’s highest insurance prices on the individual market. Garfield, Lake and Grand counties top the list. (See Table 2 and Map 1.)

On the other hand, seven of the 10 counties with the lowest proportion of taxpayers paying the penalty are on the Front Range. Douglas County had just 2.5 percent of returns with the penalty and Broomfield County had 3.5 percent. These are two of the wealthiest Colorado counties and have high rates of employer-sponsored insurance.

Tiny Hinsdale County led the state, with no taxpayers paying the ACA penalty in 2015. 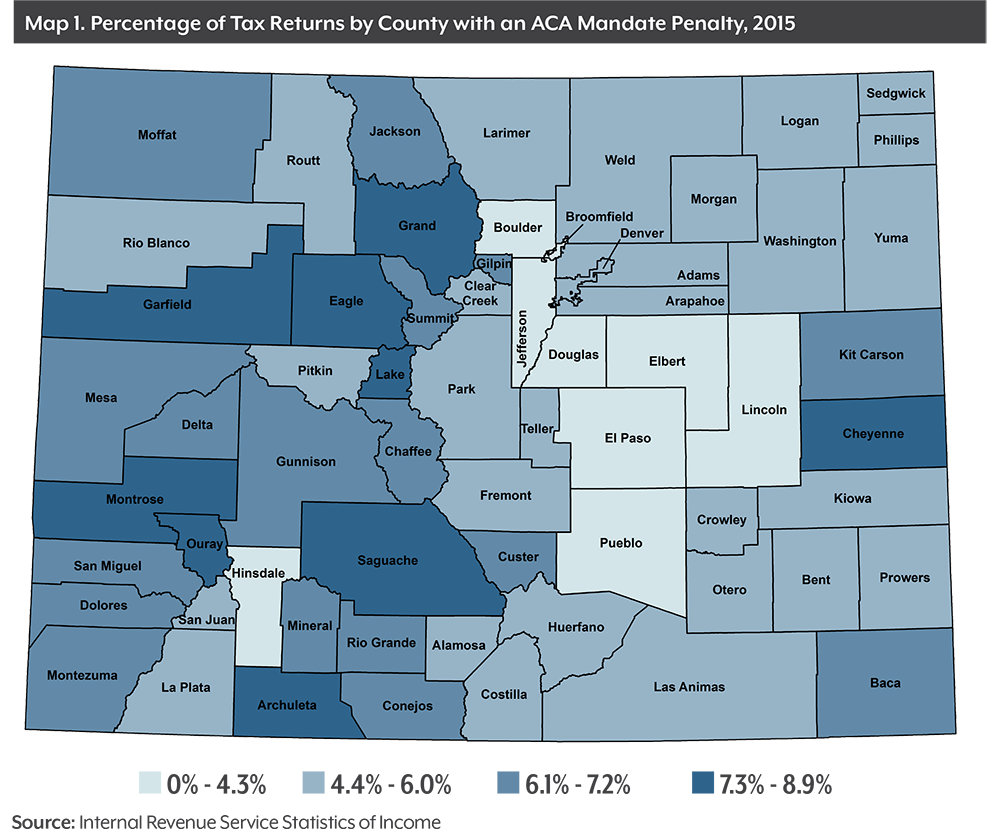 Colorado had slightly higher rates of taxpayers who paid the penalty then the national average in both years.

Colorado ranked 14th among the states for the highest percentage of its population paying the penalty in 2015. Texas was first, at 7.1 percent. Hawaii had the least, at 2.0 percent.

For many Coloradans weighing whether to buy insurance or pay the penalty, the cost-benefit calculation comes down in favor of paying the penalty. (This calculation does not take into account the value and protection of having health coverage.) To change the calculation and entice more people to be covered, the ACA’s subsidies would need to become more generous, the penalty would have to be more severe, or both.

When it is released, IRS data from 2016 will help paint a better picture of the effectiveness of mandates and tax credits, because that is the year prices started rising dramatically on the individual market.