Colorado has made great strides in improving access to health care for its residents. But moving into the 2020s, that progress is in peril.
Published: December 6, 2019 | Updated: April 23, 2020
Colorado Health Access Survey

Most of Colorado's residents describe their health as good, very good, or excellent. But some groups of Coloradans report better health than others.

Nutritious food and housing are fundamental to health. Yet one in 10 Coloradans don’t get enough to eat, and one in 15 worry about having a place to live.

The 2019 CHAS sheds new light on the health of Coloradans and the stories behind the statistics.

While there has been little change in the state’s uninsured rate, Colorado has lost ground on affordability of insurance and coverage for children. New analysis shows many Coloradans struggling to afford housing, food, and medical care, all of which can affect health. This all points to work that must be done to secure the gains of the past decade and build a more equitable system.

When people’s incomes are too low to afford necessities such as food or utilities, their health is profoundly affected. Coloradans with incomes below the federal poverty level are twice as likely as other Coloradans to report fair or poor health (26.7 percent, compared with 13.0 percent of those with higher incomes).

New CHAS data show that there is a strong connection between housing and food security and health. People experiencing unstable housing or who have not been able to afford food are more than three times as likely to report poor general, mental, and oral health.

Most Colorado adults say they are treated fairly by the medical system. Yet nearly one in six (15.1 percent) say that they are sometimes or often treated unfairly when getting medical care. Race, ethnicity, age, and gender are a few of the reasons people believe they were treated unfairly. Most of those who report unfair treatment said that the experience caused stress, which can negatively affect health.

Colorado’s uninsured rate remains at 6.5 percent — statistically unchanged since the 2015 survey, the first after the ACA took effect. The lack of improvement is striking, considering a historically strong economy. Colorado did see slight growth in job-based insurance in 2019.

Two years ago, Colorado had insured 97 percent of its children. But that progress has started to reverse, particularly for Hispanic/Latinx children. Their uninsured rate tripled from 2.4 percent in 2017 to 7.9 percent in 2019.

Toll of Drugs and Alcohol

More than a million Colorado adults (26.9 percent) say that they, a loved one, or a close friend has been addicted to alcohol or drugs in their lifetime.

Use of Care: More People Visited the Doctor and Dentist

Most Coloradans — 81.1 percent — report visiting a general doctor in the past year. Nearly three-quarters of Coloradans (73.6 percent) visited the dentist or dental hygienist in the past year — an encouraging increase over the past decade. 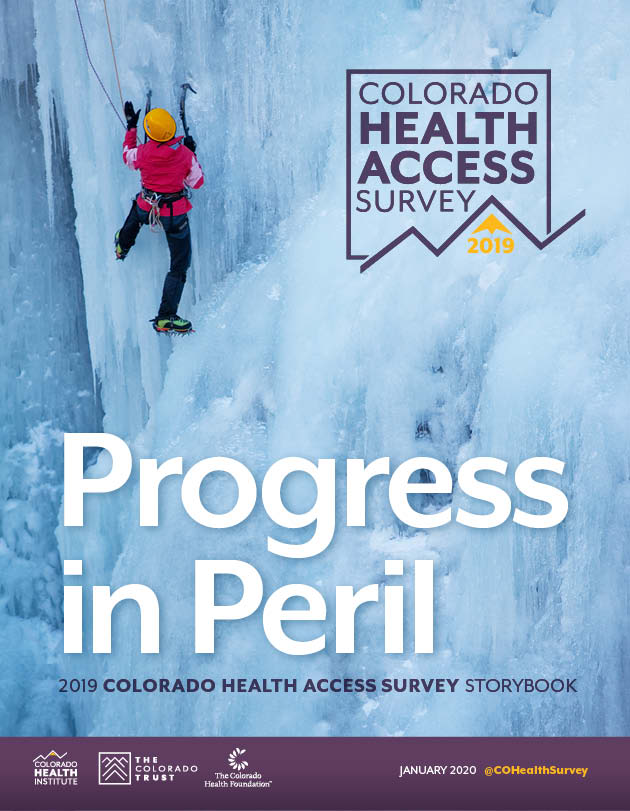 *This document was updated on Jan. 2 to make some minor corrections. If you have questions about specific revisions or would like to request an updated print version of the report, please contact us at CHAS@coloradohealthinstitute.org.

The CHAS: About the Survey

The Colorado Health Access Survey — the CHAS — is the premier source of information about health insurance coverage, access to health care, and use of health care services in Colorado. The CHAS is a biennial survey of more than 10,000 households that has been conducted since 2009.