Where Does Vaping Stand In Colorado? 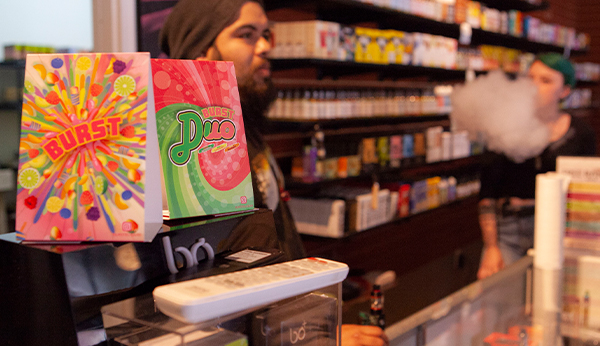 E-cigarettes, once heralded as the safer alternative to smoking tobacco, have raised health alarms across Colorado and elsewhere that hearken back to the days of Joe Camel.

An outbreak of lung diseases tied to vaping have triggered a proposed Food and Drug Administration (FDA) crackdown, new regulations across Colorado, and lawsuits aimed at JUUL, the leading e-cigarette manufacturer.

So, why is it all happening now? And what can we expect moving forward?

It’s been over a year since CHI published a report on the subject, which noted that more than one in four of Colorado teens had used e-cigarettes recently — the highest percentage in the nation.

Since then, there have been more than 1,080 lung-injury cases reported across the country, according to the Centers for Disease Control and Prevention (CDC). The Mayo Clinic has found that the injuries resemble chemical burns. Nationally, the CDC has counted 18 deaths associated with e-cigarette use as of October 13. Colorado officials continue to see more cases of vaping-related illness by the week.

E-cigarettes, also known as electronic nicotine delivery systems, simulate the experience of tobacco smoking. Many even look like a cigarette. But there are important differences.

Models: Some are disposable, others rechargeable.

Chemicals: Cigarette smoke contains as many as 7,000 chemicals, some carcinogenic. E-cigarette vapor has far fewer chemicals, but it does contain potentially harmful metals like lead, volatile organic compounds and cancer-causing agents, according to the CDC.

Cost: A pack of 20 cigarettes averages $5.35, including taxes, in Colorado. That’s about a dollar less than the national average. By comparison, a JUUL pod averages $4.36, including taxes. The pod can last from a day to two weeks, depending on how often the user takes a puff.

In an October 7 report that three school systems have sued JUUL, The New York Times noted that "public officials have taken a stronger stance against e-cigarettes in recent weeks after health experts identified a link between vaping and lung problems in August."

But CHI Policy Analyst Jalyn Ingalls, who wrote the CHI vaping report, wonders why it took so long.

“I’m curious –– how long did it take the health field to catch up and realize it was vaping,” she said. “How many people were sick a year ago when we wrote the paper?”

Effectively, the burden of proof has been on the public health professionals to show e-cigarettes are harmful, Ingalls said.

“They weren’t on top of it to begin with,” she said, “because the company didn’t need to prove they were safe, they just put them out there. And now we’re seeing the repercussions in public health."

On the heels of a growing count of deaths and injuries, JUUL’s CEO stepped down, and the company promised to halt marketing in the U.S. However, Ingalls said it’s a little too late.

“JUUL didn’t really need marketing once it became popular,” she said. “Kids marketed it for them.”

Much of the concern about vaping centers around young users. In response, 11 local governments in Colorado have raised the legal age to purchase vaping products to 21. Denver voted to do so last month.

However, it isn't certain that government intervention can solve the problem quickly.

More than 60 percent of student e-cigarette users reported that they receive their products from somewhere other than a business, according to the 2017 Healthy Kids Colorado survey.

And as Ingalls points out, many teens who live in a community that has cracked down on vaping could simply go elsewhere to buy the products.

“It’s a place to start, but it’s not going to make a sweeping impact like I think that Michigan and Massachusetts’ ban laws will have.”

Federal health officials have released a consumer alert discouraging people from using vaping products that contain THC. The FDA is currently finalizing a policy that would remove many non-tobacco flavored e-cigarettes from the market. A group of U.S. senators is pushing for greater restrictions beyond the FDA’s plan, with one calling for a permanent ban on flavored e-cigarettes.

In Colorado, it is very likely the state legislature will pursue some action during the coming session. CHI’s legislative experts think some options could include:

Ingalls does not anticipate the state being on the front lines of fighting the problem.

“I think the biggest impact will be FDA efforts,” she said. “I don’t think Colorado’s going to be one of the states that leads the way on tackling e-cigarettes with policy issues –– as much as I wish it were.”

The federal government bears most of the pressure to find a solution, Ingalls said. Even though some Colorado counties have been taking steps to regulate e-cigarettes, the state as a whole is taking its time to find a policy solution that works best for it.