As prescription drug prices continue to soar, policymakers are searching for options to drive down consumers’ costs. Scrutiny of pharmacy benefit managers is emerging as one of those options. Pharmacy benefit managers (PBMs), once under-the-radar cogs in the pharmaceutical supply chain, have gained power over the past decade and now play a key role in pricing.

Pharmaceutical drug prices are a major factor in driving overall health care spending higher. Per capita spending for pharmaceuticals in the U.S. reached $1,443 in 2016, roughly twice that of other developed nations.1

Most Americans are fed up with drug prices and want Congress to do something about them.3 Eighty percent of people think drug prices are too high, according to a Kaiser Health News poll earlier this year. This is an issue that unites both sides of the political aisle: 65 percent of Democrats and 74 percent of Republicans think the pharmaceutical industry has too much sway over lawmakers.4

This paper explains how pharmacy benefit managers evolved, how they work and the implications of policy changes that might help to manage pharmaceutical costs in Colorado and across the nation. 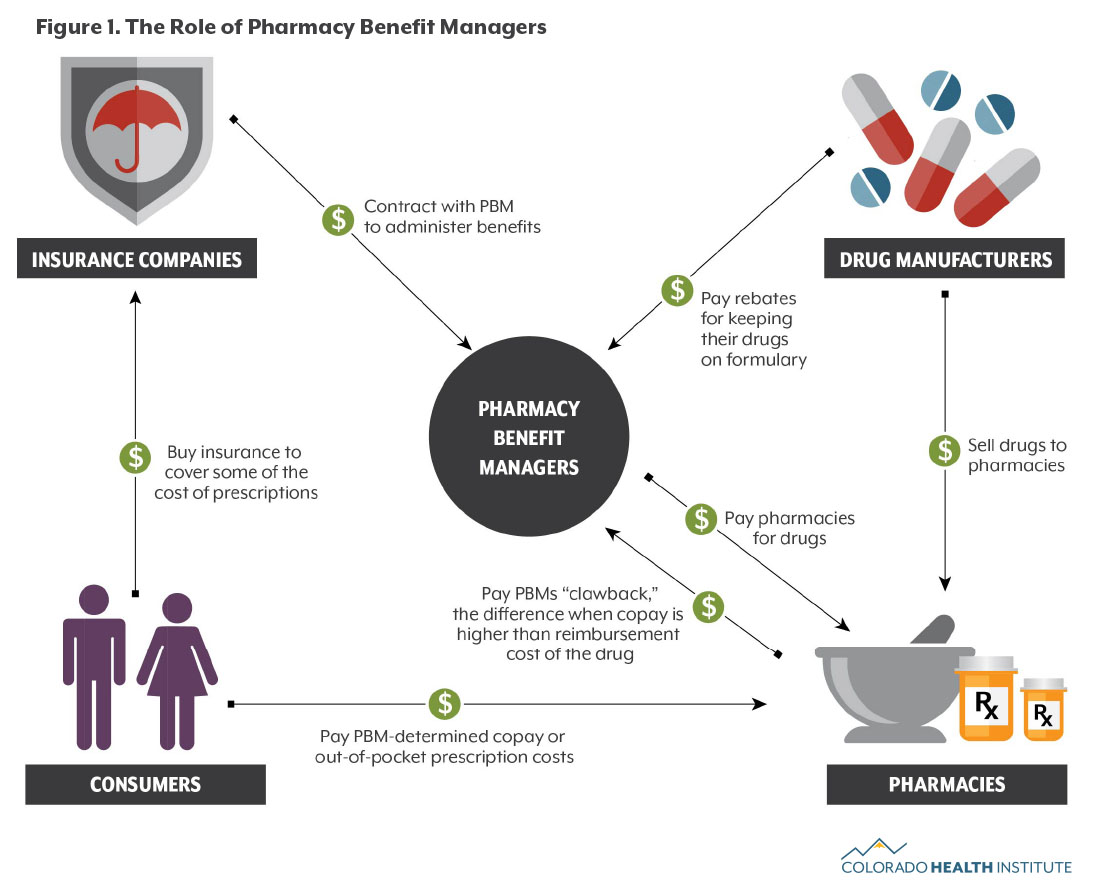 Pharmacy benefit managers are at the heart of what has become a complicated supply chain getting prescription drugs from the manufacturer to consumers.

These firms sprang up in the 1960s, specializing in handling lots of relatively low-dollar claims. Many insurance companies soon contracted with them to manage their pharmacy services.

Pharmacy benefit managers oversaw the prescription drug claims that came through pharmacies, set copayment levels for enrollees, and decided which pharmacies would be in-network.

By the 1990s, pharmacy benefit managers had expanded their services to include negotiating with drug manufacturers for rebates, effectively opening a new stream of revenue. They also began offering services like mail order drugs, disease management plans for chronic illnesses, and patient monitoring for potential negative drug interactions.

At the same time, pharmacy benefit managers began consolidating, using their greater size as leverage to negotiate lower prices from manufacturers, promising to pass on savings to the insurance companies that were paying them.

However, due to increasing per-unit prices on brand-name drugs, Medicare Part D spending spiked 62 percent between 2011 and 2016, even with rebates and discounts from manufacturers, according to the Office of the Inspector General.6

Pharmacy Benefit Managers and Their Role in Drug Pricing

How much pharmacy benefit managers add to prices as drugs flow from manufacturers to consumers has become the focus of many policymakers.

Pharmacy benefit managers grew based on their usefulness to insurers and their ability to leverage their larger scale for lower prices. But the current business model is raising red flags for some critics.

Here’s a high-level rundown of that business model:

The rebates and clawbacks, in particular, are drawing criticism.

The rebates often don’t make their way back to insurers, and if they do, they may be used for something other than lowering premiums for consumers whose prescriptions drive the rebates.8  A recent lawsuit against national insurer Anthem claimed the company used billions of dollars in rebates to buy back its own stock ahead of a failed merger.9 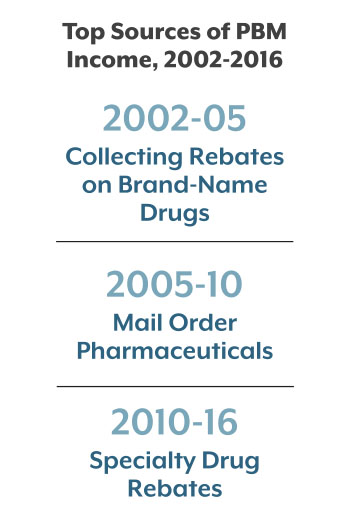 One of these giants, CVS caremark, is itself is the result of a merger between CVS pharmacies and the caremark pharmacy benefit manager group. CVS caremark recently acquired health insurer Aetna for $69 billion. Cigna, another health insurer, announced in March that it plans to acquire Express Scripts for $52 billion.

Last year, more than half a million Coloradans did not fill a prescription because it cost too much, according to the Colorado Health Access Survey. This number has changed very little since 2009, the first year of the survey.

This year, Colorado lawmakers and others put pharmaceutical prices in their crosshairs.

Colorado and at least 29 other states took up legislation targeting pharmacy benefit managers. Colorado lawmakers voted to close the “clawback loophole,” which allows pharmacy benefit managers to place gag orders that prohibit pharmacists from informing their patients of cheaper payment options or alternative medications. This allows PBMs to recover excess copays from pharmacies.

House Bill 18-1284, which went into effect on August 8, prohibits pharmacy benefit managers or insurance carriers from placing such gag orders.

Six other pharmaceutical-related bills failed to make it to the governor’s desk. These included several bills on drug price transparency, one bill which would have allowed cheaper drugs to be imported from Canada, and two bills which would have prohibited price gouging on prescription drugs.

A bill to allow patients more freedom in choosing a pharmacy drew the attention of Express Scripts and CVS, which testified against it. It eventually died in the Senate Business, Labor, and Technology Committee.

Colorado, like most other states, does not have regulatory oversight or reporting requirements for pharmacy benefit managers.

Colorado lawmakers this year took a step toward addressing the powerful role of pharmacy benefit managers.

CHI anticipates more attention will be paid to increasing transparency and addressing drug prices in the future.