Food for Thought: Reforming the System

The May SNAC Lab featured a provocative talk about the possibilities and roadblocks to health system reform from someone who has deep experience in both public health and medical care — Dr. Bill Burman, director of Denver Public Health and former interim CEO of Denver Health and Hospital Authority.

Burman shared his frustrations at a national health system that spends too much on medical treatment and produces worse results than other countries. He also shared success stories and his sense of optimism that it is possible to reform the system to meet the Triple Aim of better care, better health and lower costs.

Burman made three main points in his presentation:

Over the years, SNAC Labs have focused on specific initiatives and reforms to Colorado’s health care safety net, from Medicaid’s Accountable Care Collaborative to expanded dental access to studies of emergency department users. The context for all these reforms is the Triple Aim — the idea that better health care for patient, better health outcomes for the population and lower health costs are all necessary to achieve simultaneously.

In May’s SNAC Lab, Burman took a step back from the usual focus on specific programs to offer a gut-check about the country’s overall progress toward health system reform. His talk was at once sobering and optimistic.

“Although the Triple Aim might seem impossible, I argue it is eminently possible, but we’re not going to get there by tinkering,” Burman said.

The system pays little more than lip service to prevention in general and to addiction in particular, he said.

“We need to take addiction seriously. We say we do, but we don’t,” Burman said.

He showed a well-known graph of health care spending as a percentage of gross domestic product for the industrialized nations. The United States spends far more than other countries and achieves worse health outcomes.

“We are an utter failure,” Burman said. “If this were a business, we would be bankrupt long ago.”

But the graph also provides a reason for hope. The fact that other countries have healthier populations while spending less shows the Triple Aim is achievable, he said. It doesn’t require a United Kingdom-style national health system, either. Australia and Germany both have multiple providers and multiple payers, and they achieve similar high results and lower costs.

Burman on the Triple Aim

“The Triple Aim has become the 2017 version of world peace. Who’s doing anything practical about it?”

Other advanced countries have succeeded because they have universal coverage and take a broader view of health that encompasses more than clinical care, Burman said.

Universal coverage would lead to lower administrative costs, less cost-shifting to private insurance from the uninsured and public insurance, and a decrease in delayed care, he said. Delayed care is expensive care because it doesn’t happen until easily treatable conditions turn into chronic and costly problems, he said.

Burman pointed out the relationship between spending on medical care and social services in developed countries. Most countries, including the United States, spend a similar amount on the combination of the two. But U.S. spending is weighted heavily on medical care, while other countries spend more on social services — and have healthier populations as a result. 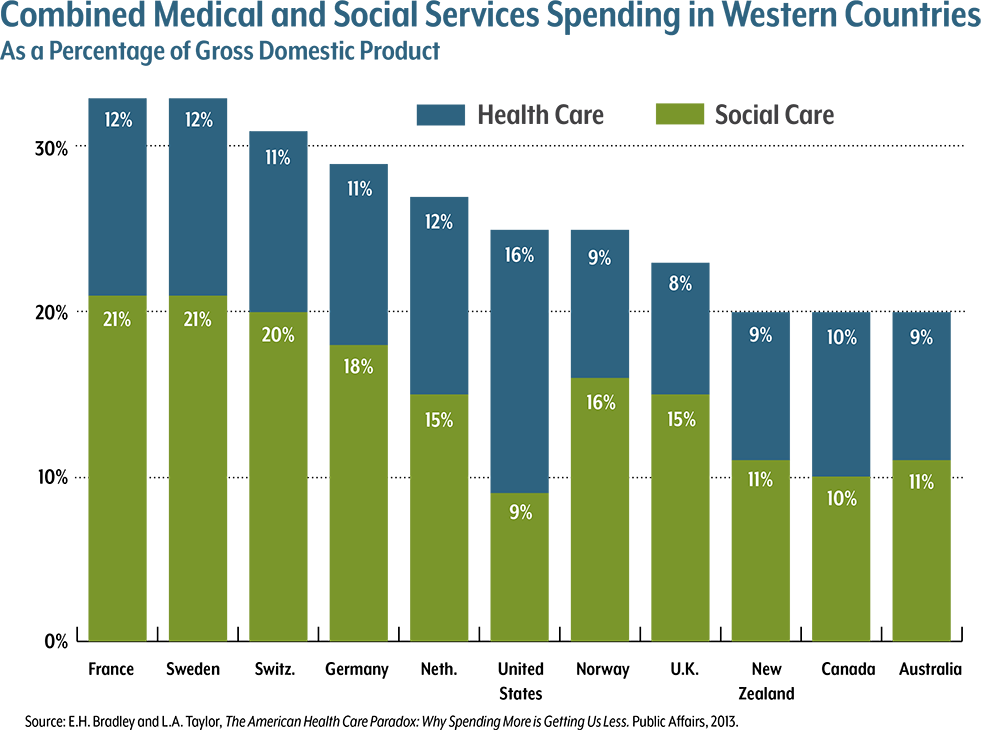 This disparity is why Burman says Americans pay only lip service to prevention. Obesity and diabetes serve as an example.

Colorado has a problem with childhood obesity, although it often goes unnoticed because “we read our own press” that tells us Colorado is the least obese state.

“That’s because we import lean people, we don’t grow them,” Burman said.

Denver ranks no better than the national average for childhood obesity.

It matters because there’s nearly a one-to-one relationship between childhood obesity and adult obesity, and unless the country can address childhood obesity, it will be on the hook for “frankly frightening” costs from the boom in diabetes that will surely result. No improvement in clinical care would be enough to solve the problem. Instead, the crisis needs to be prevented from happening, Burman said.

Burman on obesity in Colorado

“One of the issues locally is we don’t think we have a problem, because we read our own press … We are nothing special.”

The medical establishment can aid prevention first by sharing its data. Denver Health is using electronic health records for public health monitoring. Also, doctors can help by advocating for significant and sustainable funding for prevention. Policymakers answer the phone when doctors call, and lawmakers are especially prone to listen when doctors are advocating for something beyond their own paychecks, Burman said.

He used Denver Health’s anti-smoking campaign as a lesson in how a successful prevention effort might work.

In 2011, Denver Health leaders saw that 26 percent of their population used tobacco — an unacceptably high rate.

Traditionally, medical systems would have advocated for more CT scans to detect lung cancer and surgery to treat cancer, Burman said. But that is just “doing the American health care thing.”

Denver Health tried an approach that integrated medical care and public health. It began with a simple intervention in primary care: asking about tobacco use, advising against it and referring patients for treatment to help them quit. Denver Health circulated data among its clinics and providers to show which ones were doing best with the new intervention, and this tactic spurred providers to step up their efforts. Denver Health leaders organized walks around their campuses to call out smokers and make sure the clinics’ employees were setting good examples. They also worked with technical schools and job sites to reach men without college educations, the group most prone to tobacco use. And they deputized youth to design and lead an anti-smoking campaign.

All these tactics worked together to create a successful campaign. Adult smoking rates dropped to 21.3 percent, an average one percentage point drop per year. While it might seem small, Burman argued it is huge. Every percentage point drop in smoking leads to more than $35 per capita cost savings for everyone in the system, he said.

A successful addiction treatment system would follow a similar all-hands-on-deck approach. It would consider:

Tackling addiction would address one of the leading causes of high costs and poor health outcomes in Denver and the rest of the country, Burman said.

After Burman’s presentation, audience members shared their frustrations about why the system seems so difficult to reform.

Funding isn’t the problem, one person said. But inefficiencies arise when administrators believe every item or service needs to be a profit center. Inpatient psychiatric beds did not make money for the hospital, but there’s a huge cost to society for not having them.

On the other hand, cost for one part of the system is profit for another. Diabetes is costly, but Davita seems to be doing really well, one person said.

CHI’s Alex Caldwell asked Burman how we could make substance use everyone’s problem.

Burman said funding is crucial. Denver Health paid for its anti-smoking campaign from Amendment 35 tobacco tax dollars. There is no comparable funding stream to address addiction. Extra staff might be needed in primary care clinics to help with increased addiction screening, he said.

Burman on substance use

“We need to take addiction seriously. We say we do, but we don’t.”

Burman said Denver Health Medical Center frequently sees patients who are “too drunk to breathe.” Doctors put them on a ventilator until they are able to breathe on their own, and then they are released. The treatment costs about $15,000. But what patients really need is housing and counseling. And $15,000 could pay for a lot of those services, he said.

CHI’s Jeff Bontrager asked whether medical and public health professionals should be trained in each other’s areas of expertise.

Burman replied that the separation of medicine and public health is unfortunate, and it wasn’t predestined. But in the early 20th century, educators established separate schools for the two disciplines. He cited Dr. Zeke Emmanuel, American oncologist and renowned health policy author, who said organic chemistry — which is required in the medical school curriculum — has little to do with doctoring skills, while epidemiology and sociology matter greatly in daily practice, but they are not routinely taught to doctors.

On the other hand, Burman said, many public health professionals say medical care is a mess and question why they should get involved. Burman tells them it’s because medical care is where the money is in this country.

The Denver Health team achieved its anti-smoking success by working across both public health and the medical system. And the integrated efforts of medicine and public health will be needed to make true progress on the Triple Aim.