But there’s an encouraging development. More Coloradans are being screened for this disease, which is potentially deadly but also curable with early diagnosis and treatment. And new medicines, combined with falling prices, are putting that treatment in easier reach.

An analysis by the Colorado Health Institute of newly available information from the state’s All Payer Claims Database (APCD) reveals the rate of Coloradans getting screened for the hepatitis C virus nearly tripled between 2011 and 2016.

Screening for hepatitis C has been a focus of public health efforts in recent years. An estimated 3.5 million Americans are living with hepatitis C, but the U.S. Centers for Disease Control and Prevention (CDC) estimates that half of them aren’t even aware they have it.

This report analyzes who is getting screened for hepatitis C in Colorado as well as the key policy actions and medical advances that are driving the rise in screening.

Hepatitis C in Colorado: A Growing — and Deadly — Problem

The number of Coloradans with hepatitis C continues to climb, partly because the opioid epidemic has spurred a rise in people sharing needles and other equipment with infected blood.

About 100,000 Coloradans were diagnosed with hepatitis C between 1993 and 2016, according to the Colorado Department of Public Health and Environment (CDPHE), although it is difficult to determine how many still live with it.

What we do know is CDPHE reported 41 new cases of acute hepatitis C in 2016, up 17 percent from 35 newly reported cases in 2011. Acute hepatitis C is a short-term infection that can, for some, go away without treatment.

CDPHE reported 4,865 new cases of chronic hepatitis C in 2016, an increase of 67 percent from the 2,908 reported in 2011. Generally, about four of five acute cases become chronic hepatitis C, which can last a lifetime and cause serious, even fatal, liver damage.

There are almost certainly cases that aren’t being counted. For every acute case that is officially recorded, there are probably about 14 that are unreported, according to the CDC. 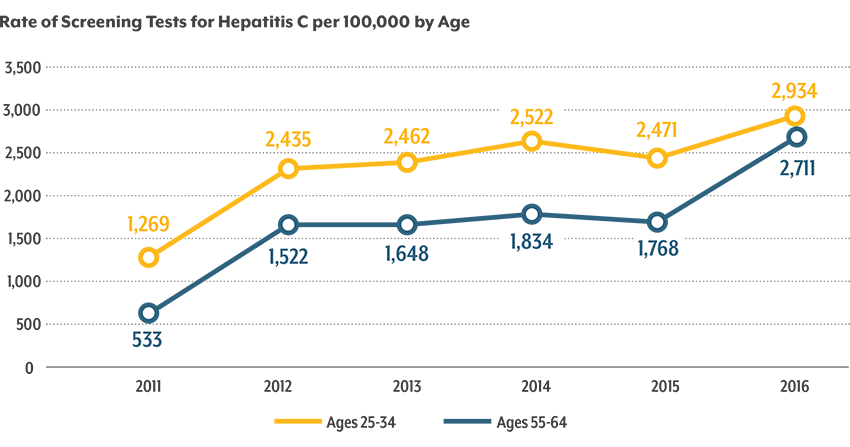 Hepatitis C is curable. But it can progress for years without symptoms, which is why it’s often called the “silent killer.” Early screening is key to successful treatment, and the good news is that screening is on the rise in Colorado, according to CHI’s analysis of newly available data.

Historically, it’s been difficult to track routine hepatitis C screening, mostly because the state health department receives information only when tests are positive.

Colorado’s All Payer Claims Database (APCD), however, provides a new window into the data around screening. The APCD, which is managed by the Center for Improving Value in Health Care (CIVHC), gathers information on the health care claims paid by private insurers as well as by Medicare and Medicaid. Launched in 2012, it now has information from payers representing about four million of Colorado’s 5.6 million residents.

This analysis is based on APCD data from 2011 through 2016. Since these data reflect only enrollees of carriers participating in the APCD, and don’t include the uninsured, the number of screenings is an undercount.

At least 63,000 Coloradans were screened for hepatitis C in 2016, according to CHI’s analysis.

Denver County recorded the highest rate of screening in 2016, followed by Gilpin County. Other metro Denver counties as well as Las Animas, Bent and Otero counties in southeast Colorado had high rates. (See Table 1). Many of these counties also had high numbers of chronic hepatitis C cases.

The Front Range counties of Broomfield, Boulder, Denver, Douglas, Jefferson and Larimer all tripled their screening rates. Outside of the metro area, Moffat County in northwest Colorado and Bent and Las Animas counties in southeast Colorado doubled their rates.

Only the rural counties of Saguache, Costilla, Lincoln, Conejos and Phillips saw declines.

What the new data don’t reveal is how many Coloradans are getting treatment following screening. That will be crucial information as policymakers and health leaders work to ensure that this disease is cured in as many people as possible.

The Surge in Screening: Tracking the Reasons

Key policy and medical advances have converged to improve hepatitis C screening rates in Colorado and across the nation.

A timeline of hepatitis C screening in Colorado shows the connection between the climb in screening rates and the medical advances and policy changes occurring at the same time.  (See Figure 3.)

The changes over these years include:

The U.S. Food and Drug Administration (FDA) in 2010 authorized a “rapid” finger prick test that provides accurate results in 20 to 30 minutes. Most screening before that required a trip to the provider’s office so that blood could be drawn, and a weekslong wait for results.

The FDA approved a triple therapy drug— a three-medication combination — in 2011 that proved 80 percent effective at curing hepatitis C with few side effects.4

Three years later, a daily pill that is even more effective arrived on the scene. An eight-week to 12-week course of treatment has a cure rate of 94 percent.5

Prices for hepatitis C drugs were historically astronomical — upwards of $55,000 to $95,000 for a full course of treatment. A new drug approved by the FDA in late 2017 comes in at $26,400, a fraction of the cost, and some patients and insurers negotiate even lower prices.6

The CDC updated its screening guidelines in 2012 to recommend that everyone born between 1945 and 1965 be screened at least once.

2. A Seal of Approval

The U. S. Preventive Services Task Force — a national panel of experts that issues widely followed recommendations for preventive services — issued a grade of “B” in 2013 for hepatitis C screening of injection drug users, indicating there was good evidence that the service would be a benefit. The task force also recommended screening the baby boomer age group.

A Colorado law recommending that primary health care providers offer hepatitis C screening to each patient born between 1945 and 1965 and refer for treatment those with positive test results passed in May 2014.  Within two years, by 2016, screening rates for adults in that age group increased by nearly 50 percent, according to CHI’s analysis of the APCD data.

Medicare announced in June 2014 that it would cover the cost of screening for its clients, including the all-important baby boomer cohort.

The increase in the number of people injecting opioids and heroin — a leading cause of hepatitis C — has driven a corresponding increase in hepatitis C testing. Injection drug users accounted for more than half of new hepatitis C cases in 2016, according to CDPHE. Generally, if someone seeks treatment for substance misuse, their provider screens for hepatitis C.

While screening for hepatitis C is climbing across Colorado, a lawsuit has spurred increased treatment of hepatitis C by the state.

The Department of Health Care Policy and Financing (HCPF), which manages Medicaid in Colorado, in January extended access to hepatitis C treatment to all members. Previously, it had limited treatment coverage to those with the most serious liver damage, stages 2 through stage 4. This puts Colorado in line with 22 other states and territories with no restrictions.

The Colorado Department of Corrections (DOC), meanwhile, received an additional $16.5 million for FY 2018-19 to treat inmates with hepatitis C, bringing its hepatitis C treatment budget to $20.5 million. The DOC told lawmakers it expects to treat about 784 inmates, up from 45 in 2016-17. The state estimates that 2,242 inmates have hepatitis C.9

Both moves came after the American Civil Liberties Union of Colorado sued to remove the restrictions on hepatitis C treatment.

Meanwhile, lawmakers in Colorado and across the nation are examining policies that could push hepatitis C screening rates even higher.

A bill introduced during Colorado’s 2018 legislative session would have allowed hospitals to offer sterile syringes to injection drug users, assisted schools in administering naloxone, an overdose antidote, and created a supervised injection facility pilot program in Denver where drug users could inject drugs under the supervision of people with medical training. The bill failed on a 3-2 vote in a Senate committee.

At the federal level, Congress is considering a bill that connects the dots between hepatitis C and the opioid crisis. The Eliminating Opioid-Related Infectious Diseases Act would fund work by the CDC and states to gather more data on the relationship between HIV and hepatitis C associated with injection drug use.

Colorado is doing a better job of screening people for hepatitis C, a good first step in getting treatment.

CHI’s analysis shows that Coloradans are getting screened for hepatitis C nearly three times more than in 2011 — with more people getting screened every year. While Coloradans of all ages experienced increases in screening, young adults ages 25- to 34-years-old and baby boomers ages 55- to 64-years-old had the highest rates in 2016.

While most areas of the state saw increases in screening, southeast Colorado and the Front Range experienced the biggest booms. At the same time, a handful of rural counties experienced a decrease in screening, possibly warranting for increased public health attention.

While we now have a better understanding of who is getting tested and where, further research is needed to identify whether Coloradans with hepatitis C are getting the treatment they need.

Bottom line: Increased screening for hepatitis C and linking people to care can save lives.

CHI conducted this analysis of screening rates for hepatitis C using insurance claims data from the Colorado All Payers Claims Database (APCD) between 2011 to 2016. The APCD includes Coloradans covered by public and private health insurance, with roughly four million Coloradans represented. Screening data were analyzed by age cohorts and county to understand trends and differences among Colorado’s populations. To reduce duplication of patients getting screened, the data included those who received a screening test during a 12-month period and who did not have a diagnosis of hepatitis C during the 24 months prior to getting screened. CHI calculated rates of screening (antibody tests) by dividing the number of individuals in the APCD population who received screening tests in a given calendar year by the APCD population that year. Rates were calculated at a rate of per 100,000.

Considerations in the use of the APCD: Federal employee health plans, Veterans Administration health plans, and Indian Health Services do not provide data to the APCD. People may leave or arrive in Colorado, impacting year-to-year continuity. Screening services provided to the uninsured are not captured. The Colorado APCD reflects the accuracies and inaccuracies associated with claims and billing codes submitted by providers and post-adjudication data submitted by each plan.

3 All-cause mortalities matched with cases of HCV in CEDRS. Deaths not necessarily attributable to only hepatitis C.

7 The Preferred Drug List is developed based on safety, effectiveness, and clinical outcomes from classes of medications where there are multiple drug alternatives available and supplemental rebates from drug companies. This gives Colorado the ability to provide medications at the lowest possible costs.

Karam Ahmad is a Senior Policy Analyst. He joined CHI in May 2017.