In some ways, 2009 was a world away. Avatar was selling out theaters, King of the Hill was still on TV, and policy wonks were anticipating that President Obama’s health care legislation would include a public option.

A lot has changed in 10 years. The public option, which would allow people to purchase a government-run insurance plan, did not make it into the final version of the Affordable Care Act (ACA). But the debate is returning to the national stage, and across the country, many states are revisiting the idea and considering creating their own publicly run insurance plans.

Colorado is one such state, and a bipartisan bill this session gives the public option a real shot at passage.

On the first day of the 2019 session, HB 19-1004 (the Proposal for Affordable Health Coverage Option) was introduced by Representatives Dylan Roberts (D-Eagle) and Marc Catlin (R-Montrose) and Senator Kerry Donovan (D-Vail). It passed the House Health and Insurance Committee on January 23 by a vote of 9-2, and as of February 20 is awaiting a hearing in the House Appropriations Committee.

The legislation does not actually create a public option, but it takes a major step in that direction. It tells two state agencies, the Department of Health Care Policy and Financing (HCPF), which administers Colorado’s Medicaid program, and the Division of Insurance (DOI), which regulates private health coverage, to develop a proposal for a state health coverage option. This proposal would be presented to legislative committees this fall. HCPF could then begin work on any federal waivers required to enact the plan, though the legislature could hit the pause button on this process during the 2020 session.

The bill includes some specific requirements for the proposal. For example, it must evaluate fiscal feasibility from the state’s perspective and investigate federal funding options. But because the text of HB 1004 does not describe the plan itself, there are still unanswered questions, such as who qualifies and how providers will be reimbursed. (See “Remaining Unknowns” for a look at some of these questions.) 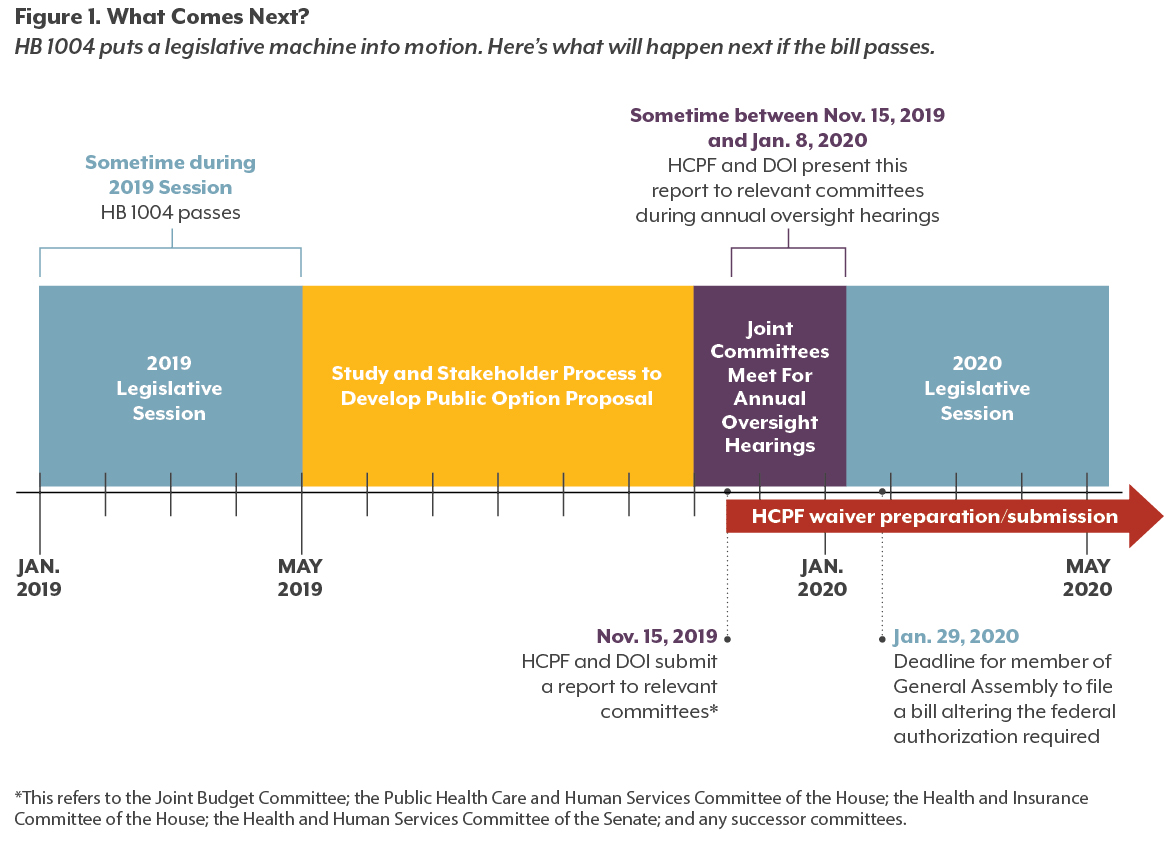 How We Got Here

Despite ACA subsidies and Medicaid expansion, many Coloradans still struggle with health insurance prices. Cost is the most common barrier to insurance cited by uninsured Coloradans, and for those with coverage, premiums have grown an average of 45 percent in the individual and small group markets since 2014.1

Advocates for a public option say a lack of competition among insurance carriers is partially to blame. In 14 Colorado counties, there is just one company offering insurance on the state exchange.

But is an uncompetitive insurance market really the problem — and if so, does a public option offer a real solution?

It’s hard to say with much certainty, especially without a specific plan to analyze. Still, a closer look at arguments on both sides of the debate sheds light on what to look for in a final proposal.

Get Ready to Rumble: Competition Arguments

For those who see an uncompetitive insurance market as a main culprit for rising premiums, the public option is a strong solution. Adding a large new public carrier will increase competition in the marketplace which, they say, will spur insurance companies to lower premiums across the board to attract customers.

Critics of the public option think this fails to address the real cause of rising health insurance premiums: the overall cost of care. New medical technologies and declining competition on the provider side (think hospital consolidations) cause prices to increase, driving up costs for insurance companies and consumers alike. As they see it, the public option fails to address this fundamental dynamic.

Both sides may be onto something, according to previous analyses by CHI. In areas with competitive provider markets but few insurers, carriers have no incentive to pass any savings on to consumers — and in fact, they don’t.2  But just as often the lack of competition among hospitals and other health care providers drives up prices, giving carriers little choice but to pass these costs on to consumers.3 Unless a public option finds ways to pay hospitals less for care than private insurers, the ability of this approach to drive down premiums will be limited.

All About the Benjamins: Profit Arguments

Some advocates cite another advantage a public plan could have over its private counterparts: less pressure to produce profits.

Most health insurance carriers operate like any other business and need to show profits for their shareholders. These profits are built into the cost of premiums. Premiums from a nonprofit state entity would not include this additional expense.

Critics again note that this may not be the right place to look if you want to make a large dent in premiums. Plans on Colorado’s individual and group markets averaged a 2.4 percent profit margin in 2017  — about on par with notoriously small-margin industries like grocery stores. 4,5

It’s true that profit margins are factored into premiums, but they’re usually a small piece of the pie. In a public option, reductions in other line items, such as administrative costs, could offer more savings than the elimination of profits. Yet whether — and how much — a state plan would invest in administrative costs such as marketing or staff salaries will remain unknown until a final plan is proposed. The elimination of profits, however, is baked into the very concept of a state or nonprofit option.

For proponents of the public option, the power of state government is often a plus. It guarantees the presence of a plan in every county and benefits from economies of scale to keep costs down. Medicaid is already the largest single insurer in the state, and the state plan could use its large network and customer base to reduce payments to providers and pass savings on to consumers.

Opponents don’t agree that these are necessarily good things. The advantages that a state-backed plan would have over private insurers may be substantial enough to drive private plans out of the market altogether. The result would be something that looks much more like a government single-payer system than a competitive public-private market. (Some advocates for the public option see this as a positive.)

In addition, the public option could squeeze hospitals and clinics because a large share of the savings would likely come from a government insurer’s ability to pay providers less for services. Some critics worry that this could reduce access to health care. This is not the only policy targeting provider earnings in Colorado: proposed reinsurance legislation (HB 1168) would cut reimbursements, and the Hospital Transformation Program seeks to change the ways hospitals receive up to $547 million in funding.6 At some point, providers may cut their services or leave the market altogether.

Again, it’s hard to say how much provider payments would be reduced — and, therefore, how much access could be affected — when the details of the plan have yet to be determined. HB 1004 requires provider rates in the proposal to “incentivize participation and encourage network adequacy and high-quality health care delivery,” but adequacy and quality are subjective concepts.

Because HB 1004 mandates that a public option proposal be developed, rather than detailing the plan itself, some important characteristics of the plan will remain unknown until the proposal drafted later this year (assuming the bill passes the legislature and is signed into law). Below are four key questions that will need to be answered.

Who would be allowed to use the public option?

The proposal must include an evaluation of “eligibility criteria for individuals and small businesses.” A state public option could be reserved for certain Coloradans or be open to everyone. If it is restricted, eligibility could be based on income, the number of insurance plans available in a county, or any number of other criteria.

How many people (and who) would we expect to use the public option?

The answer largely depends on the eligibility criteria. It also will depend on how well the public option is able to manage its own premiums, out-of-pocket costs, and benefit design. It’s important to remember that a large market share is not an explicit goal of the public option proposal. Most advocates would say the measure of success for a public option is increased competition and lower private insurance premiums — not big enrollment figures.

How would this affect the state’s bottom line?

Public option advocates often envision plans with no negative impact on the state budget. But HB 1004 does not require the proposal to be budget neutral to the state.

If the state plan is fully financed by its premiums, it should not require additional support from the general fund. And if Coloradans’ need for ACA subsidies declines as a result of lower premiums, the state may be allowed to share in the federal government’s savings. However, a waiver to repurpose ACA subsidies — and any other federal waivers the plan would require — would face an uphill battle for approval from the Department of Health and Human Services under the Trump administration.

Another version of a public option could involve some state funding to subsidize costs. Whether, and to what extent, the plan will leverage state and federal funds remains to be seen and should be outlined in the final proposal.

Will provider reimbursement be sufficient?

A perennial concern about public health insurance, including Medicaid and Medicare, is whether providers are paid sufficiently to ensure access for enrollees. HB 1004 mandates that the final proposal demonstrate reimbursement rates will be sufficient to ensure adequate access for members. (Though again, criteria for “adequate” has yet to be defined.)

Much remains to be seen about the future of a state insurance option in Colorado, but two things are certain. First, the public option has been a priority of many advocates for years, and HB 1004 offers the policy its best shot at success yet. Second, this could be one of the more fundamental changes to Colorado’s health care system since the ACA went into effect. CHI will be following developments closely.

3 Colorado Health Institute (2017). “The Competition Conundrum: The Role of Competition in Improving the Affordability of Insurance.” Hot Issues in Health Presentation. Accessed February 8, 2019 from: https://www.coloradohealthinstitute.org/sites/default/files/file_attachments/Competition_HIHC%202017_For%20Web.pdf

9 Garratt-Reed, M. (2018). “NM Exploring Medicaid Buy-In as a Pathway to Coverage for All.” United States of Care Blog. Accessed February 8, 2019 from: https://unitedstatesofcare.org/blog/new-mexico-medicaid-buy-in/

From Sea to Sea

Colorado is not alone in exploring a public option this year.

New Mexico has introduced HB 416, the Medicaid Buy-In Act.7  The bill would allow New Mexicans who aren’t eligible for public health insurance or ACA subsidies to purchase coverage through the state Medicaid program. As in Colorado, the details of financing and reimbursement rates are yet to be determined.8,9

In Washington State, policymakers may soon see legislation creating a state-run health plan. The plan would compete with private plans on the state exchange and reimburse doctors and hospitals for care at Medicare rates.10

New York City already has a public option available to some of its residents: MetroPlus, which operates the city’s Medicaid and Child Health Insurance Program, also offers plans for purchase on the state exchange to those who qualify. Mayor Bill de Blasio is looking to expand the program, using $100 million in city funds to guarantee provider access for any uninsured city residents not currently eligible for this option, including undocumented immigrants.11

Nationally, House Democrats introduced a “Medicare at 50” bill on February 13. This legislation would allow any American 50 or older to purchase Medicare, a government public insurance program typically reserved for people 65 or older or with certain disabilities or medical conditions.