The opioid epidemic claimed the lives of 560 Coloradans in 2017.1 Health care providers and civic leaders around the state are searching for solutions. But one proven treatment for opioid use disorder is largely underused, which means thousands of Coloradans don't have an option that could set them on a path to recovery.

Buprenorphine is a form of medication-assisted treatment, or MAT. It is a U.S. Food and Drug Administration (FDA)-approved prescription drug used to help people reduce or quit their use of addictive opioids such as pain relievers and heroin. (See “The ABCs of MAT” box below.) The Drug Addiction Treatment Act (DATA) of 2000 allows doctors who undergo a specialized training to apply for a waiver from the federal government to prescribe buprenorphine in physician offices and other approved settings. DATA 2000 and subsequent rules have increased access to treatment in Colorado, but there are still significant opportunities to further increase the availability of this important tool for supporting people with opioid use disorder.

An estimated 47,000 Coloradans have an opioid use disorder.2 In 2016 and 2017, 12,600 people received buprenorphine prescribed by an authorized provider. Many more people could have been served if more providers were trained and received waivers to prescribe the medication, and if more of those who have waivers wrote prescriptions.

Nearly half (46 percent) of the 702 providers in Colorado who have a federal waiver did not prescribe buprenorphine between 2016 and 2017. Barriers that discourage these providers from prescribing buprenorphine include time constraints and fear that the medication, which is itself an opioid, will be diverted to people for whom it was not prescribed.

This report, based on data from the Colorado Prescription Drug Monitoring Program (PDMP) and the Substance Abuse and Mental Health Service Administration (SAMHSA), seeks to answer the following questions:

CHI’s analysis suggests that the answer to both questions is yes. 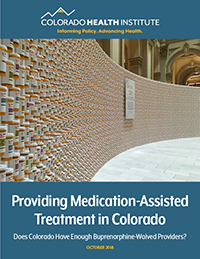 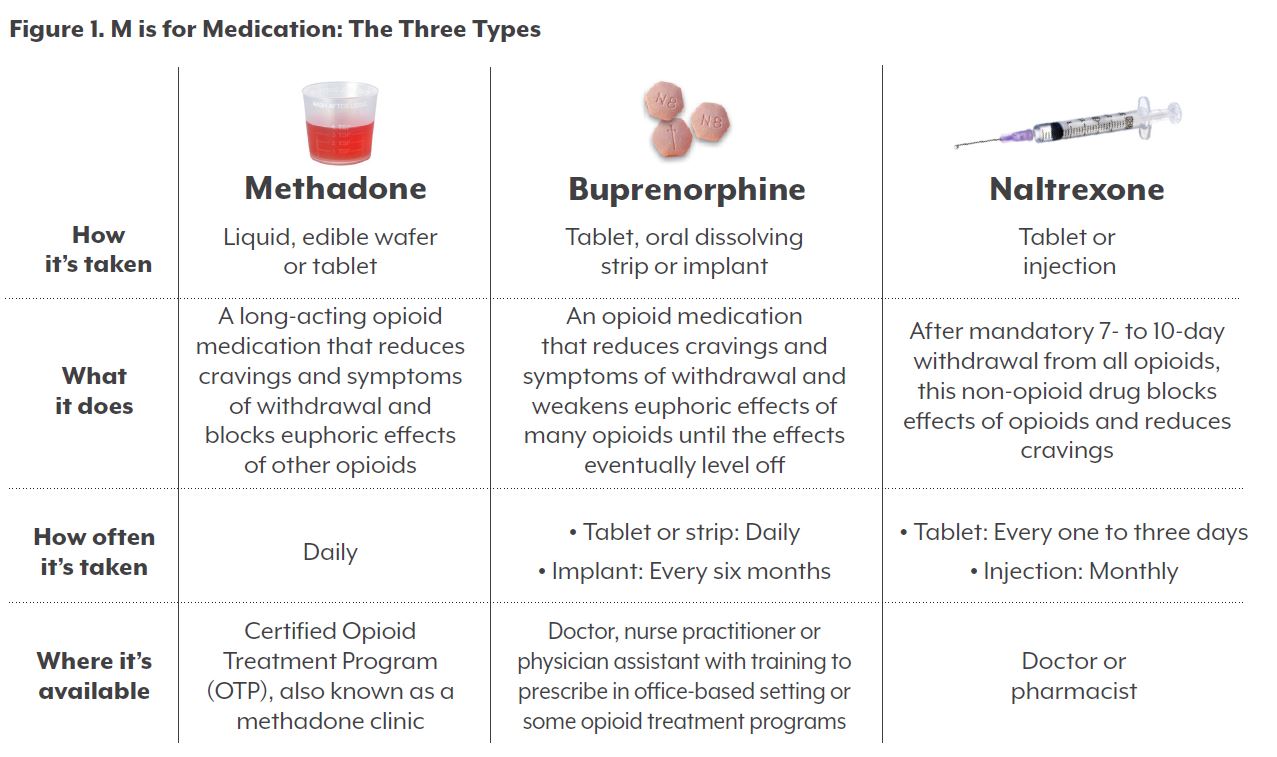 2000, which allows physicians who have completed mandatory training to receive a waiver to prescribe buprenorphine for the treatment of opioid dependence.

To respond to the growing need for drug treatment services, the SAMHSA issued a final rule in July 2016 that allows qualified practitioners to treat up to 275 patients at one time.4

Also in 2016, Congress passed the Comprehensive Addition and Recovery Act (CARA) that allows nurse practitioners and physician assistants to prescribe the drug.5 They must go through 24 hours of training, compared with just eight hours for physicians. Nurse practitioners and physician assistants can treat up to 30 patients at a time, but are not eligible to receive a 100- or 275-cap waiver.

In October 2018, the Substance Use-Disorder Prevention that Promotes Opioid Recovery and Treatment (SUPPORT) for Patients and Communities was signed into law. Among other things, this legislation expands access to MAT by including clinical nurse specialists, certified registered nurse anesthetists, and certified nurse midwives as qualified prescribers. It also allows some providers to treat up to 100 patients immediately. This policy was implemented after the data included in this analysis was collected. It means that, moving forward, there will be more providers who can provide buprenorphine.

The ABCs of MAT: Buprenorphine

Medication-assisted treatment addresses the physical cravings and withdrawals associated with opioid use. It should be used in combination with counseling or other forms of care to manage the psychological symptoms of addiction. Buprenorphine is one of three types of MAT approved by the FDA.
The others are treatment with methadone and naltrexone. The Colorado Health Institute’s 2017 publication “Miles Away from Help” has a more comprehensive overview of MAT.
Buprenorphine, an opioid, is classified as a Schedule III drug, so providers must have
special training and apply for a waiver to be able to prescribe it to patients for opioid use
disorder.

Small but Growing Number of Colorado Providers Can Prescribe MAT

To increase access to authorized providers, SAMHSA hosts the Buprenorphine Treatment Practitioner Locator, a nationwide database of providers who can prescribe buprenorphine. Providers can choose to opt in to or opt out of having their name and practice listed.

As of December 2017, 702 Colorado providers had received a buprenorphine waiver. The number represents a small fraction of all physicians, nurse practitioners and physician assistants practicing in Colorado.

Figure 3 describes the authorized providers in Colorado. Most providers are medical doctors or doctors of osteopathic medicine (MD/DOs). The majority can legally treat 30 patients at one time.

Majority of Waived Providers Fell Short of Treating at Capacity

One way to expand treatment would be for more providers to seek authorization to see more patients. More than 320 waived providers have not updated their caps since 2015, and three-quarters of them are limited to 30 patients. (See Figure 4.)

According to data from the PDMP, just 54 percent of waived providers wrote a prescription between 2016 and 2017. CHI estimates that just 31 percent of them were treating near or at their capacity. (See Note About Methodology.)

That means waived providers who did not write any buprenorphine prescriptions in 2016 and 2017 could have treated an additional 11,340 patients at any given time if they were prescribing at capacity.

A Note About Methodology

It is important to note that 164 providers received their waiver for the first time in the second half of 2017. Our analysis includes them in the total denominator of 702 providers, but it is unlikely that these providers were able to start treating patients during our data collection period. This means that providers who were waived at the end of 2017 may be overrepresented in our analysis of the number of providers who did not treat any patients, or did not treat at capacity, during the data collection period. 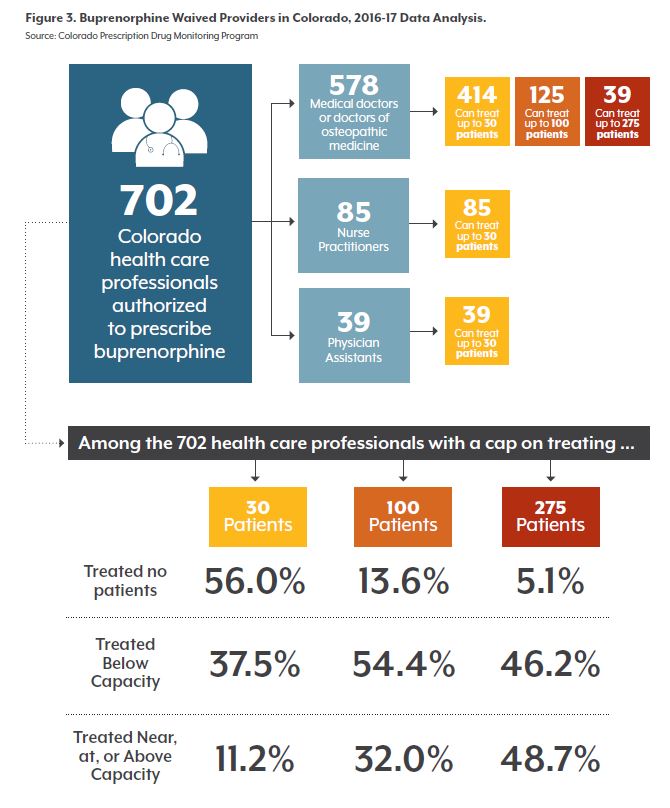 Waived Providers Treated Over 12,000 Patients, but the Work Doesn’t Stop There

Buprenorphine providers in Colorado could treat nearly 40,000 patients if they were all treating at capacity. But they aren’t.

This means many rural Coloradans live far from a waived provider. Some of Colorado’s rural counties have some of the highest rates of opioid overdoses statewide over the past five years.

Primary care providers are often a one-stop shop for health care in small communities. Many have large patient loads and may not have the time or capacity to provide MAT to residents who need it.

Some of rural providers who do have waivers to prescribe buprenorphine are not listed on the SAMHSA Buprenorphine Treatment Practitioner Locator. So, even if a rural county has a provider, local residents may not know about them.

The Next Step: More Providers or More Prescriptions?

First, do we need more buprenorphine-waived providers to prescribe?

YES. Only 54 percent of waived providers in Colorado wrote a prescription that was filled for buprenorphine in 2016 and 2017. Encouraging these waived providers to begin treating patients with opioid use disorder would help expand access to MAT in Colorado.

However, there are obstacles to prescribing buprenorphine in a doctor’s office. Rural providers throughout the U.S. who have a waiver but have never prescribed buprenorphine report that lack of mental health services, time constraints, and concerns about misuse of medication are barriers to prescribing.7

Again, the answer is YES. As of December 2017, waived providers had the capacity to treat nearly 40,000 patients. Taking into consideration this number, and the number of people treated at licensed opioid treatment programs during 2016 and 2017, Colorado still may not be adequately prepared to meet the demands of people with an opioid use disorder, particularly those in rural areas.

In a 2017 survey of 74 non-waived providers, 33.8 percent said they were not willing to prescribe buprenorphine.8 The most reported reason for passing up a waiver was not wanting to be inundated with requests for buprenorphine.

There may be other reasons. For instance, a waived provider may be in a location where there isn’t a need for MAT or may have a difficult time connecting with patients who need MAT. These providers may be willing to treat at capacity, but have a hard time building the client base. In addition, some providers may already have a full practice and be unable to accept new patients.

Addressing these factors can help expand access to MAT — an evidence-based practice that can put providers on the front line of treating people with opioid use disorder.

One effort to expand the number of authorized providers in Colorado is IT MATTTRs 2, funded by the Office of Behavioral Health through the State Targeted Response award, a large grant from the federal government. This program provides financial incentives for providers to obtain their buprenorphine waiver, and trains practices and providers about MAT, including offering technical assistance to those who have questions about prescribing.

The changes that have come with the SUPPORT Patients and Families Act are also a step towards increasing access to this form of treatment.

Five hundred sixty Coloradans died from an opioid overdose in 2017, up from 504 in 2016. As these numbers climb, increasing the number of buprenorphine providers and the number of people they treat could help save hundreds of lives and turn around thousands more.