Rising suicide rates and mass shootings have elevated mental health as a priority in Colorado, placing it among Colorado’s 10 Winnable Battles. So, for the first time, the Colorado Health Access Survey (CHAS) included questions pertaining to mental health and access to mental health care.

The CHAS found that one of four Coloradans had at least one or more days of poor mental health – defined as stress, depression or emotional problems – in the month before the survey.

Regions with between 10 percent and 15 percent of residents reporting poor mental health were clustered in two areas of the state: southwest and western Colorado plus the metro Denver area.

Northeast Colorado and the Eastern Plains had the lowest rates of poor mental health, below 5 percent.

The data might not tell a complete story. Health workers say people suffering from mental health problems often are unwilling to say so because of the stigma that surrounds their condition.

Colorado’s goal is to reduce the percentage of adults with depression from 7 percent to 5 percent by 2016. 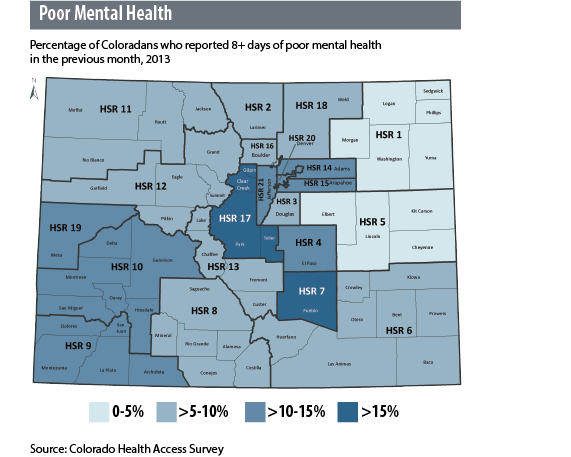