Health Insurance is Less Tied to Jobs Than Ever in Colorado

Colorado reached a milestone in 2017. For the first time, less than half of Coloradans received their health insurance through an employer, even as the state’s economy boomed and employment levels were at record highs.

That’s a sign of an ongoing sea change in how Coloradans get their health insurance.

Data from the Colorado Health Access Survey (CHAS) show that the proportion with employer-sponsored insurance dropped more than eight percentage points from 57.7 percent in 2009 to 49.4 percent in 2017.

Among the Coloradans who historically have relied on their jobs to provide insurance benefits, an increasing number are now getting insurance through Medicaid or Medicare, and to a lesser extent the individual market.

While millennials who are working jobs without benefits in the so-called gig economy have attracted attention, people over the age of 35, especially those approaching retirement age, have been most affected by the change. The 55 to 64 group is significantly less likely to have job-based insurance now than just a few years ago.

Even as Colorado’s population grew by more than 200,000 between 2013 and 2017, the number of people insured through an employer actually dropped by nearly 65,000, according to the CHAS.

A Decade of Change

The Great Recession of 2008 and its aftermath — which saw unemployment rates rise to nearly 9 percent in 2010 in Colorado and hover above 5 percent for more than 6 years — drove the biggest change in job-based insurance since the CHAS began in 2009. It dropped by 6.6 percentage points between 2009 and 2011.

Some people moved into Medicaid, while others were left without health insurance. While the recovering economy led to a slight uptick in employer-sponsored insurance in 2013, Colorado has never returned to that 2009 peak. Meanwhile, the state saw important changes in the insurance landscape since the Affordable Care Act took effect in 2014.

While job-based insurance has continued its decline, fewer Coloradans were uninsured in 2017 than in any previous CHAS survey. At the same time, Medicaid enrollment has grown substantially, largely due to the expansion of eligibility in 2014. And the proportion of Coloradans covered by Medicare increased as the state’s population aged. In other words, unlike in previous years, most of those who no longer have job-based insurance did not wind up uninsured, but instead are on public insurance.

This phenomenon, in which people previously covered by private insurance take on public insurance like Medicaid, is referred to as crowd-out. 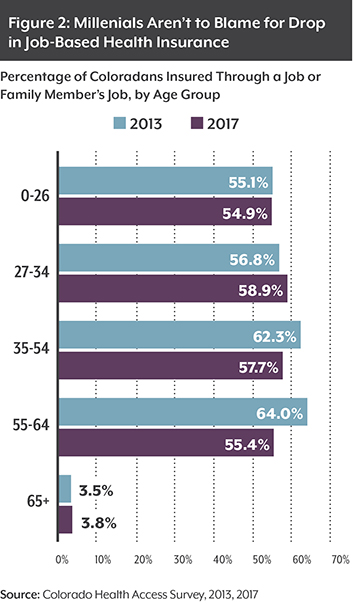 Conventional wisdom says millennials working temporary or gig-economy jobs — such as Uber drivers or freelance workers — are spurring the decline in employer-sponsored insurance. But the CHAS finds older adults mostly account for the recent change.

A variety of factors may be at play.

Fewer workers in the 55- to 64-year-old age group said their employer offered them insurance in 2017 compared with four years earlier. More members of this age group were self-employed or disabled in 2017, possibly shifting to the individual market.

At the same time, the 2014 expansion of Medicaid allowed lower-income adults without dependent children to enroll in Medicaid for the first time. It also increased the eligibility threshold for parents from 100 percent FPL to 138 percent FPL. These two groups, particularly adults without dependent children, encompass many in the 35- to 64-year-old age group. 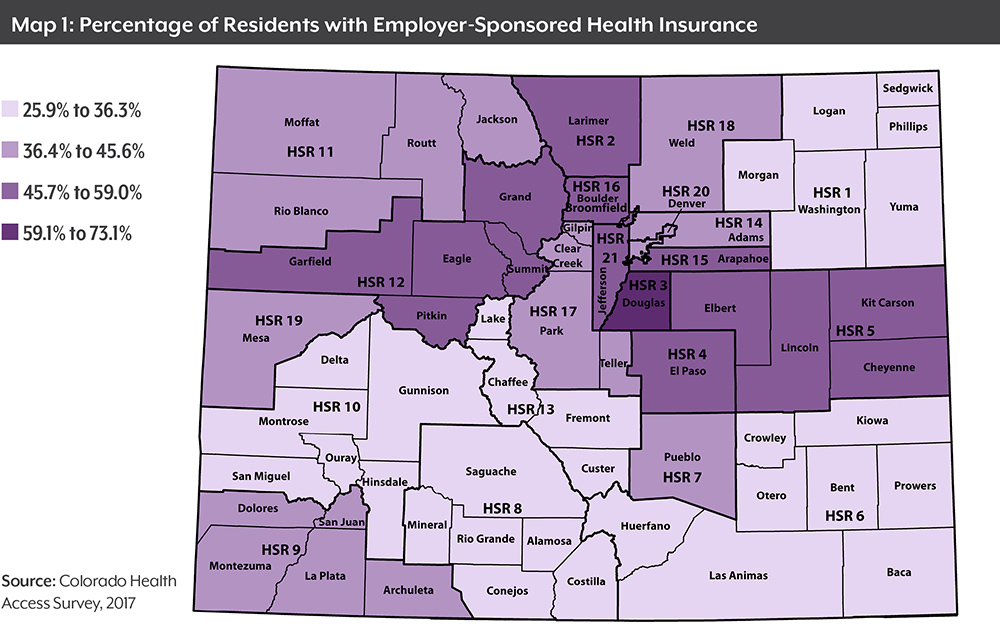 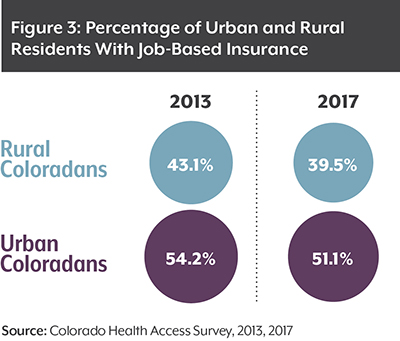 Rural Coloradans are much less likely to have employer-sponsored insurance than those who live in cities and suburbs. This is no surprise. Large employers that offer insurance are usually based in cities.

But both rural and urban Coloradans were less likely to have insurance through their employers in 2017 than four years earlier.

There is enormous variation throughout the state. In the San Luis Valley, which includes Alamosa, Costilla, Conejos, Rio Grande, Saguache and Mineral counties, just a quarter of people had employer-sponsored insurance in 2017.

In affluent Douglas County, on the other hand, nearly three quarters (73.1 percent) of people received insurance through their jobs.

There are outliers in the urban/rural trend. Mesa County, home to the Grand Junction urban area, had lower-than-average rates of job-based coverage, while the ski resort corridor had higher rates than other rural regions. Weld County — which includes both rural and urban areas — is closest to the state’s median.

Employees of small businesses are much less likely to have job-based insurance than those who work for companies with more than 50  employees. That difference has been present for years, but it grew slightly more pronounced in 2017.

This change may be tied to the Affordable Care Act. The larger companies are required to provide insurance or pay a penalty while smaller companies are not1. But market forces matter, too. In a competitive job market like Colorado’s, large employers use health insurance and other benefits to appeal to potential employees.

A recent study from professional services firm Lockton showed that, while most large employers still offer insurance, the cost is increasing for employers, and many are passing those costs along to employees2 even as wages in the state have remained largely flat3.

While those in families making more than 400 percent of the federal poverty level (FPL) — about $97,200 for a family of four — saw the biggest drop in job-based insurance, they still had the highest level. Two of three (66.6 percent) of this group  got insurance through an employer, compared with 44.5 percent of those between 139 percent and 400 percent FPL and just 21.2 percent of those at or below 138 percent FPL — the threshold to qualify for Medicaid.

Both white and Hispanic Coloradans saw drops in employer-sponsored insurance. But white Coloradans are still more likely to have the job-based coverage, with a 2017 rate of 53.0 percent compared with the 38.4 percent for Hispanics. Women, meanwhile, saw a slightly bigger drop in job-based insurance than men between 2013 and 2017.

A number of factors influence those differences. For instance, a 2014 CHI analysis of health insurance among Hispanic adults found that this group was less likely to be offered employer-sponsored insurance, and that a range of factors from English proficiency to perception and familiarity of the U.S. health system to citizenship status played a role in their lower insurance rates.4 And a Kaiser Family Foundation report found that women are less likely to be insured through their jobs and are more likely to be covered as a dependent, which puts them at greater risk of losing coverage if employers decide to stop covering family plans.5 These examples are a reminder that the changing dynamics around employer-sponsored insurance will likely affect different groups differently. 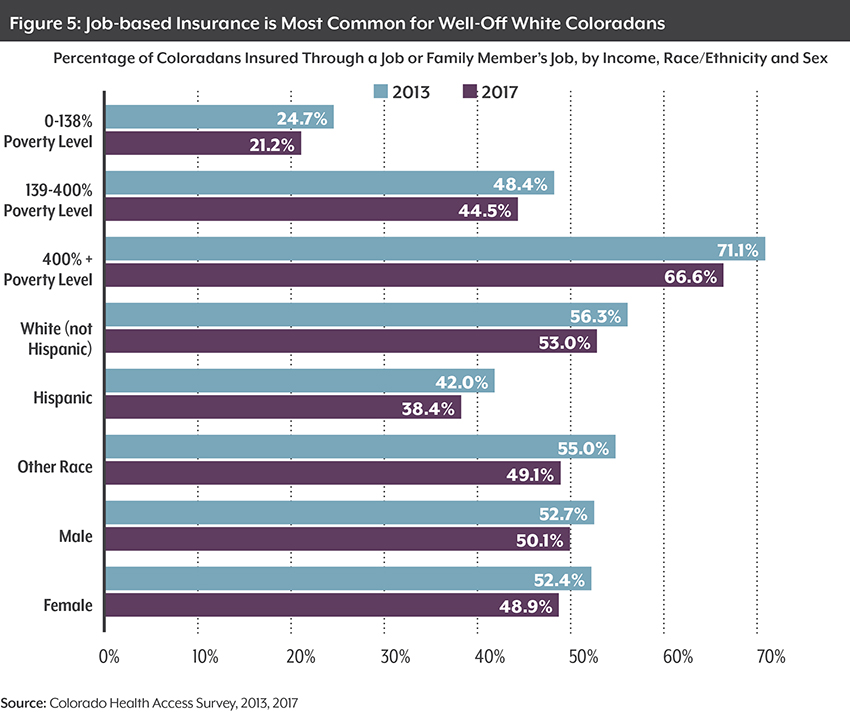 Conclusion: The Economy’s Booming – but Job-Based Insurance Is On the Decline

Most Coloradans historically have looked to their jobs for health insurance. It’s a major perk for workers. Employers usually cover some of the cost of insurance, making higher-quality plans more affordable.

But the past decade has seen a steady decline in people insured through an employer, and not even Colorado’s economic good times are reversing the trend.

The 2017 CHAS was conducted at a time when Colorado had the lowest unemployment rate in the country – 2.3 percent in May 20175. Still, 2017 was the year Colorado reached a symbolic milestone. Employer-sponsored insurance now covers fewer than half of the state for the first time. The biggest change has been for Colorado’s older adults.

Jackie Zubrzycki supports the Colorado Health Institute’s efforts to produce and communicate work that advances health in the state. She aims to ensure the team’s research and reports are compelling, equitable, and accurate.