Going for the Bronze: Underinsurance in Colorado

Now that the number of uninsured people seems to be dropping, another barrier to health care is getting attention – underinsurance.
Published: January 9, 2015 | Updated: April 19, 2017
Health Care Costs
Health Coverage and the Uninsured
Share Tweet

People who are underinsured may have plans with a high deductible, a common characteristic of bronze plans. These plans look attractive because of the relatively low premium, but they can be deceiving to someone who is new to buying health insurance. An unsuspecting consumer could be faced with high medical bills.

People with high deductible health plans might forgo preventive care because of cost, potentially leading to untreated illnesses. And data from the Colorado Health Access Survey suggest there might be a slight correlation between regions with a high percentage of underinsured people and a high percentage of residents visiting the emergency department.

The Colorado Health Institute will continue to monitor this pattern and see if a strong correlation emerges in the coming years. 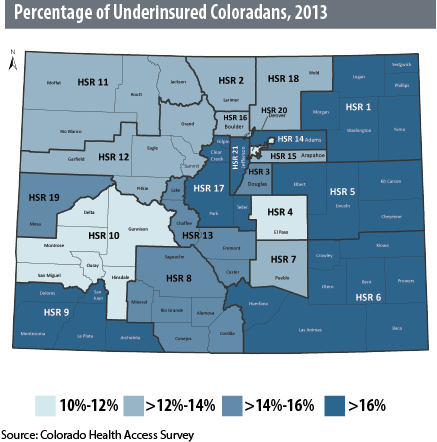 Nina Roumell is a former research analyst at CHI.