A Game-Changer for High Insurance Prices?

Note: This report is based upon a 2018 version of reinsurance legislation. For highlights of the 2019 version, read this blog.

State lawmakers, who have searched for years for ways to control the skyrocketing costs of insurance premiums in rural Colorado, are considering an idea that is gaining national momentum — reinsurance.

Reinsurance is basically insurance for insurance carriers. The state-run program would cover some of the costs of the most expensive health care consumers on the individual market, reducing insurers’ expenses and lowering premiums that state regulators allow them to charge customers.

Early estimates suggest that reinsurance could reduce premiums by about 20 percent in the individual market, where people who are self-employed or don’t have insurance through an employer or public program buy coverage.

Individual market customers who would benefit the most are the ones who have suffered the most from recent price increases — those who do not qualify for federal tax credits under the Affordable Care Act (ACA).

About half of the funding for reinsurance would come from fees on insurance policies, resulting in higher prices for many other consumers. The remaining funding would result from lower premiums, which would save the federal government money it spends on ACA subsidies for eligible consumers. The savings would then be passed on to the reinsurance program.

Prior to the ACA, many states — including Colorado — operated high-risk pools to cover the most expensive customers who could not get coverage because of pre-existing health conditions. But the pools were expensive for both the state and customers, and they covered only a portion of the neediest patients.

High-risk pools were phased out because the ACA required insurance companies to offer coverage to everyone, no matter their health status. But now the high-risk population is back in the spotlight because their disproportionate share of health spending is contributing to rising premium prices for the entire individual market.

Recently, Alaska, Minnesota and Oregon have turned to reinsurance programs — which, like high-risk pools, attempt to solve the problem of how to cover people with the most expensive health needs. The Colorado Division of Insurance (DOI) commissioned a study by the actuarial consulting firm Milliman that showed premiums could decrease by nearly a fifth under a well-funded reinsurance program.

The DOI has the responsibility of approving the premiums that insurance carriers can charge for their individual market policies, based on the companies’ projected revenue and expenses. With a reinsurance program, expenses would drop, so DOI regulators would mandate lower prices.

The reinsurance fund would be run by the state, and it would be paid for by federal dollars from the ACA plus fees on perhaps 1 million or more Coloradans with private insurance coverage, most of whom are not on the individual marketplace. The federal government would need to approve an ACA waiver for Colorado to launch the program.

The bigger the reinsurance fund, the better it would work to drive down health insurance premiums. Legislators are considering a large fund of more than $300 million a year.

It’s all about evening out the pain of Colorado insurance customers and the carriers that provide their coverage. Fees on a large group of customers would help pay for significant relief for a smaller number of people in the individual market who have suffered the most from high premiums in the past five years.

This paper gives a basic overview of how a Colorado reinsurance program could work, examines who would and would not benefit from reinsurance, and poses critical questions for policymakers to consider. 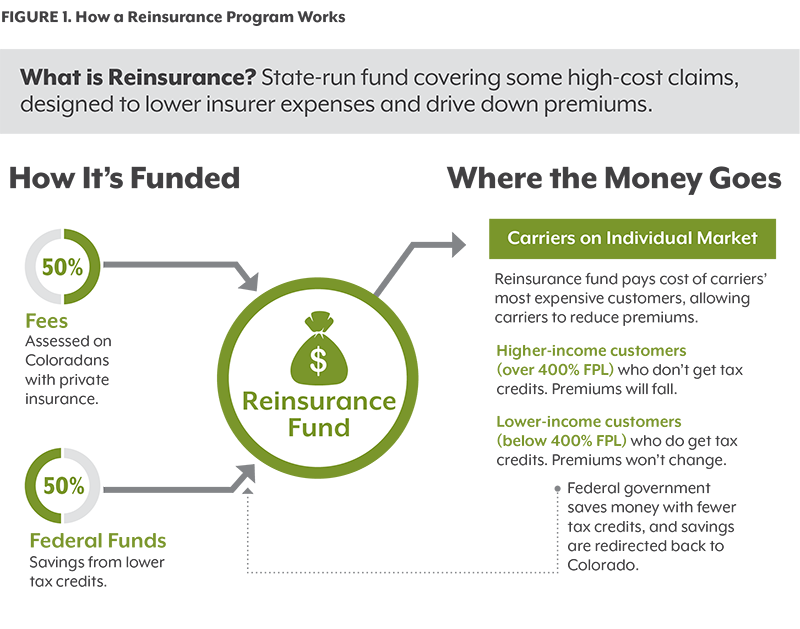 How Could a Reinsurance Program Work in Colorado?

A reinsurance program can be designed in many ways.

Colorado’s Division of Insurance convened a stakeholder group in June 2017 to examine options for the state.7  It hired Milliman to conduct an actuarial study examining health insurance data to estimate the costs and impacts of a reinsurance program.8

Fees on insurance plans, plus federal funds secured through an ACA waiver, would fund Colorado’s reinsurance system. (See Figure 1.) The reinsurance fund would make payments to insurance carriers to cover individual claims above a certain amount, called the attachment point.

This paper looks at two sets of questions, based on the Milliman study:

How Much Could Reinsurance Improve Affordability?

Two groups of Colorado customers stand to benefit from a reinsurance program, according to the Milliman study:9

People who get their health insurance somewhere other than the individual market would not see benefits. In fact, some would be assessed fees passed along by their insurance companies to fund the reinsurance program.

Milliman also projected an increase in enrollment due to lower premiums ranging from 2,000 to 17,000, depending on the size of the reinsurance fund. Without the lower premiums, these people would probably be uninsured.

The projected premium reductions would provide welcome financial relief for some. But even if Colorado implemented a large reinsurance program in 2018, premiums might still be higher than those seen in 2017 because of other factors, such as Congress’ repeal of the individual mandate and continuing steep increases in prescription drug prices. 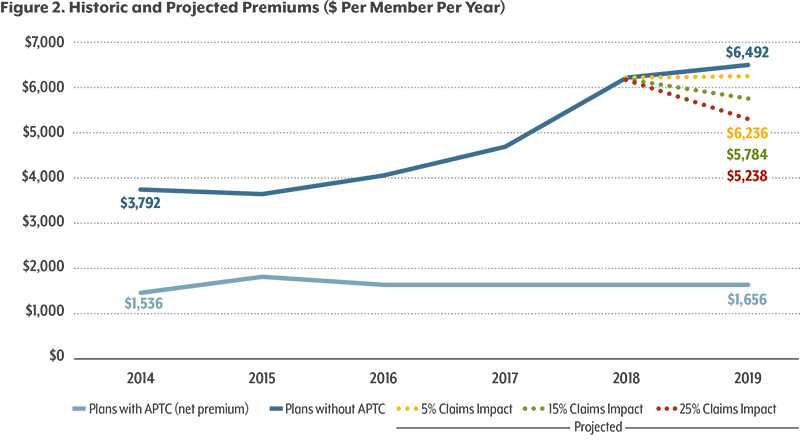 How Could a Reinsurance Program be Funded?

Funding for reinsurance depends on a bit of budgetary magic enabled by the ACA. The law offers subsidies paid by the federal government to help consumers afford health insurance.

Those federal tax credits would fund only about half of of Colorado’s reinsurance program. The other half would come from fees assessed on insurance companies. The Milliman study modeled annual fees ranging from $18 to $198 for each person covered by a carrier — fees that could be passed along to customers. The amount of the fee would depend on the size of the reinsurance fund and the types of health insurance plans subject to the fee.

Colorado legislators could impose fees on individual market plans, fully insured group plans and stop-loss plans, which are insurance plans bought by self-insured employers as their own form of reinsurance.

However, federal law would likely prevent the state from imposing a fee directly on the self-insured ERISA plans, which cover about two-thirds of Coloradans with job-based insurance.

The per-person fee in HB 1392 would likely be less than $100 per year. The scenario in the Milliman report that comes closest to the bill is a large reinsurance fund with fees on fully insured, individual and stop-loss plans (see Table 1). However, the reinsurance program proposed in HB 1392 differs slightly from the scenario that Milliman modeled.

The administrative costs to run the program would likely be between $450,000 and $1.2 million a year, according to the Milliman report.11

Is Reinsurance a Game-Changer?

It’s important to recognize what a reinsurance program could and could not do.

It could provide substantial help to the approximately 124,000 people who buy coverage on the individual market and don’t receive federal tax credits. Plus, the premium reductions could make insurance affordable for people who might otherwise decide to go without coverage.

Reinsurance could also help keep more carriers in the market and improve competition and choice for consumers. For most carriers, the individual market is not a profitable line of business,12  and the possibility of carriers exiting the market is never far away. Reinsurance removes some of the financial risk from carriers, which could help their bottom line.

But reinsurance is not a game-changer in the broader push to control health care spending. Reinsurance shifts the burden of paying the bills, but it does not tackle the increasing costs of hospital and physician care or prescription drugs. Recent studies show that Colorado spends substantially more on health care than many other states,13, 14 and as long as this is true, premiums will be high.

A Colorado reinsurance program would be an expensive proposition with the promise of substantial benefits to those who have suffered the most from recent price increases.

Some questions for Colorado policymakers to consider:

Will consumers notice a dramatic price reduction from reinsurance? A large reinsurance program could reduce consumer costs by nearly 20 percent, but it’s not clear that consumers would notice. If prices jump again in 2019 — possibly from repeal of the ACA’s individual mandate and other Trump administration actions that could draw healthier customers out of the individual market — price reductions from a reinsurance program could be swamped. So, even though reinsurance could prevent an even larger price increase, consumers who were expecting a price cut could be in for an unpleasant surprise.

How confident can we be that the projected premium reductions will actually happen? The Milliman projections are based on several assumptions. Will the financial assistance that carriers get from the reinsurance program translate into premium reductions? It’s possible that carriers won’t be able to reduce premiums as much as projected. Plus, the federal government would determine how much money it would give to Colorado to finance the program if it decides to approve the waiver. This decision would directly impact the size of the program, the level of premium reductions and the overall feasibility.

What is the right balance between fees and the effectiveness of the program? A small program would impose low fees, but it wouldn’t provide much help to individual market customers. A larger program would reduce premiums more but would require fees of around $100 a year on policies covering about 2 million Coloradans.

Who will bear the burden of the fees? Will carriers absorb the fees to pay for the reinsurance program? Or will they pass them directly to their consumers? This could influence how palatable the fee assessments will be to consumers — and to lawmakers.

Will the federal government approve a proposal for reinsurance in Colorado? It has approved requests from Alaska, Minnesota and Oregon but not Oklahoma and Iowa. State proposals must meet specific timelines and procedural requirements. This represents a wild card in any efforts to implement reinsurance.15, 16, 17

For the past several years, policymakers have tried to address skyrocketing premiums on the individual market. Those efforts have largely failed,18 and Coloradans saw premiums rise an average of 34 percent in 2018. Policymakers and consumers are anxious to find something that can provide relief.

Reinsurance is an attractive option. It could reduce premiums for an estimated 124,000 Coloradans, and the federal government could repurpose some of its savings from reduced premium tax credits to pay for half the cost of the program. It could also help settle a jittery market, attract more customers who currently pass up coverage because of the cost and perhaps attract more competition among carriers.

But it would be costly. As many as 2 million Coloradans would pay fees to help finance the program. Plus, a reinsurance program won’t address the underlying causes of high health care spending in Colorado.

Unanswered questions about the impact of reinsurance remain. And policymakers will confront the thorny issue of weighing benefits for a relatively small number of Coloradans against the costs that would be imposed on many more.

Reinsurance cap: The maximum amount of a customer’s annual claims that the reinsurance fund will help pay. The original insurance company would be responsible for the rest.

Self-insured or ERISA plans: Health plans provided by a company that takes on the financial risk of providing health care benefits to its workers. Most large employers opt for these plans, which are not subject to state regulations or fees. These plans are regulated under the U.S. Employee Retirement Income Security Act (ERISA). They cover approximately two-thirds of employer-sponsored insurance enrollments in Colorado.

Individual or non-group market: Customers who buy health coverage directly from the insurance company rather than using an employer plan. A reinsurance fund would apply only to this market. About 250,000 Coloradans are insured through the individual market, according to a study by Milliman, an actuarial consulting firm.*

5 Urban Institute. What Explains the 21 Percent Increase in 2017 Marketplace Premiums, and Why Do Increases Vary Across the Country? January 2017.