Focusing on Minorities and Mental Health

Mental illness in the minority community is in the spotlight this month. Data show barriers to car for Colorado minorities.
Published: July 11, 2014 | Updated: May 7, 2019
Community Health

Mental illness in the minority community is in the spotlight this month. July is National Minority Mental Health Awareness Month. And Monday, July 7, was the annual #NoShameDay, which focuses on blogs and tweets to help raise the visibility of the issue.

Ethnic and racial minority groups tend to face greater exposure to racism, discrimination, violence, and poverty, which can influence their mental health. These challenges are often coupled with poor access to mental health care and a culturally-based stigma around mental health.

The 2013 CHAS offers insight into minority mental health needs and barriers in Colorado.

A similar percentage of non-Hispanic whites (7.7 percent) and Hispanics (7.1) report that there was a time in the 12 months before the survey when they didn’t get needed mental health care or counseling services But nearly 12 percent of non-Hispanic minorities, a group that includes blacks, Asians and American Indians, report an unmet mental health need – a significant difference from Hispanics.

Those who reported having an unmet mental health need were then asked why they hadn’t seen a mental health care professional. Significant differences between race/ethnic groups are shown for the response that they did not feel comfortable talking with a health professional about personal problems.

About four of 10 Hispanics (40.3 percent) and non-Hispanic minorities (45.7 percent) reported this lack of comfort as a barrier, nearly twice the percentage of non-Hispanic whites (25 percent).

This finding suggests that Hispanic and minority communities face a heightened barrier to receiving mental health care, which may be related to stigma, or a lack of culturally and linguistically competent services. As Colorado becomes increasingly diverse, the CHAS will help bring awareness to minority mental health issues by tracking any disparities between race/ethnic groups. 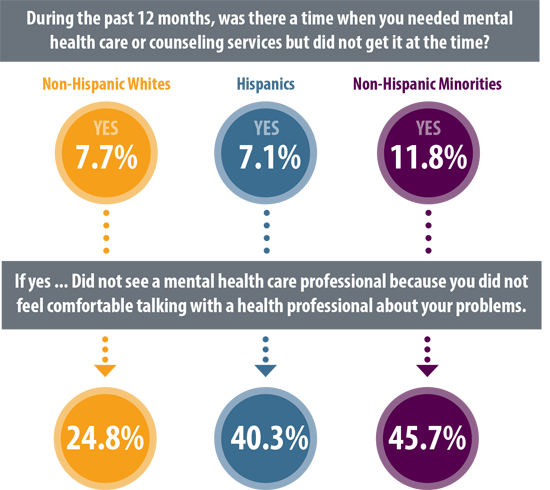