2015 EBNE: Colorado’s Eligible but Not Enrolled Population Continues to Decline

The number of uninsured Coloradans who did not enroll in Medicaid or Child Health Plan Plus (CHP+), despite being eligible for the public coverage programs, continued to drop in 2015, falling to 130,000, according to a new analysis by the Colorado Health Institute.

The study also found a decline in the number of eligible Coloradans failing to take advantage of tax credits to purchase insurance through the state-based marketplace, dropping to 122,000.

Across the state, 441,000 residents under age 651 did not have insurance in 2015. Of those, 252,000 were eligible for Medicaid, CHP+ or the tax credits. The rest were in higher-income brackets, had refused offers of affordable insurance from an employer or were undocumented immigrants.

The findings show that health policies designed to help low-income and middle-income earners — including the Affordable Care Act (ACA) and accompanying enrollment and outreach efforts — are making inroads toward the goal of full health coverage.

Of the five million state residents with insurance in 2015, the Colorado Health Institute estimates that about 1.3 million obtained their coverage through one of the three programs, the most ever.

This research brief updates the Colorado Health Institute’s annual Medicaid, CHP+ and advance premium tax credit (APTC) enrollment analysis, evaluating the reach of these programs and examining the populations that remain uninsured despite their eligibility — a category known as eligible but not enrolled (EBNE).

We address four key questions: How many of Colorado’s uninsured were adults eligible for public insurance or tax credits in 2015? How many were kids? How many were undocumented immigrants? And has any of this changed since the implementation of the ACA?

When we refer to someone as EBNE, we mean that they are uninsured even though they are eligible for Medicaid or Child Health Plan Plus (CHP+) public insurance or for an advance premium tax credit (APTC) to purchase insurance through Connect for Health Colorado.

Eligibility is based on income, age, citizenship status and more.

There isn’t an official count of the number of undocumented immigrants in Colorado or the United States. So, the Colorado Health Institute developed a method for estimating the likelihood that someone was an undocumented immigrant. This method was based on findings from a 2006 Pew Hispanic Center report. (See the “Methods and Limitations” document.)

Delving into the Data

There have been large gains in coverage from 2014, when 534,000 Coloradans went without insurance. Outreach and enrollment efforts have helped establish a new baseline expectation of coverage in Colorado. These new expectations in many states across the country hampered recent federal efforts to reform or roll back these insurance programs.

The state’s EBNE rate for Medicaid dropped six percentage points to nine percent in 2015 from 15 percent in 2014, according to the analysis. (See Table 1.)

The EBNE rate for CHP+, the program for children in families earning just above the Medicaid cutoff level, dropped 11 percentage points, to 23 percent in 2015 from 34 percent in 2014. (See Table 2.)

And the rate for Coloradans eligible to purchase coverage using the tax credits fell nine percentage points to 59 percent in 2015 from 68 percent in 2014. (See Table 3.)

Overall, the number of uninsured Coloradans dropped to 441,000 in 2015, according to the American Community Survey (ACS).

This information is important for policy discussions. Undocumented immigrants are not eligible to enroll in Medicaid or CHP+, except in extraordinary circumstances, or to buy insurance through the marketplace. Immigrant health advocates have previously considered state options for covering people without proper documentation through these programs.

Another 52,000 of the 441,000 uninsured Coloradans weren’t eligible for any sort of coverage assistance due to their income. These are higher earners with annual incomes of more than four times the federal poverty level (FPL), about $48,000 for an individual in 2017, above the eligibility cutoffs for both public insurance and tax credits.

Finally, the remaining 26,000 of the 441,000 uninsured were ineligible for coverage assistance because they were offered an affordable coverage option by their employer. The ACA defines employer-sponsored insurance as “affordable” if it does not cost the employee more than 9.7 percent of his or her income.

Wait . . . How Many Uninsured Coloradans Are There?

While both surveys indicate that the uninsurance rate dropped dramatically since 2013, what accounts for this gap?

The answer is found in differences between the two methodologies. For example, the ACS has a larger sample size, but the CHAS includes more confirmation questions to accurately determine respondents’ insurance status. The ACS is used in this analysis because its larger sample allows for county-level estimates and its detailed demographic profiles allow for the most accurate estimates of the eligible population.

QUESTION ONE:
How Many Uninsured Adults Were Eligible for Public Insurance or Tax Credits in 2015?

Overall, this means that more than 216,000 uninsured Colorado adults qualified to receive some sort of public or private insurance assistance in 2015 — more than half of all uninsured adults.

While Medicaid enrollment is free, consumers who qualify for tax credits to purchase insurance must pay premiums. Because of this, encouraging the relatively high number of uninsured adults who are eligible for APTCs to buy insurance may involve more than just education and outreach. Price is most likely a barrier in many cases.

Data from the 2015 CHAS indicate that cost is prohibitive even for those qualified to receive the tax credits. The average monthly premium for a bronze plan after tax credits was $156 in 2015,2 but nearly half of Colorado’s uninsured residents indicated they would be willing to pay no more than $99 per month.3

What else do we know about these uninsured adults? Disparities that existed prior to the ACA were still there in 2015. EBNE adults were more likely to be Hispanic and young. They also were less likely to have graduated from high school.

QUESTION TWO:
How Many Uninsured Children Are Eligible for Public Insurance or Tax Credits?

The uninsurance rate for Colorado’s kids was just 4.4 percent in 2015, according to the ACS, down from 6.3 percent the previous year. This happened even though none of the ACA expansions targeted children. It may be that as parents enrolled in Medicaid for the first time, they brought their kids along with them. This phenomenon is known as the “welcome mat” effect.

This means that 61 percent of uninsured children were eligible for some sort of assistance last year, be it Medicaid, CHP+ or the tax credit, creating an opportunity for outreach and enrollment efforts to bring health insurance to even more children.

Disparities based on race/ethnicity or citizenship status that existed among these EBNE children prior to the ACA remained in 2015. The pool of EBNE kids is 43 percent Hispanic, compared with 31 percent of the overall child population.

Previous research has shown that EBNE children are more likely to come from “mixed composition” families, meaning they had at least one parent who was an undocumented immigrant. Because their parents were not eligible for any form of public insurance assistance, this may indicate a reverse welcome mat effect, where parents’ ineligibility discouraged them from enrolling their children.

QUESTION THREE:
How Many of Colorado’s Remaining Uninsured Are Undocumented Immigrants?

While a quarter of Colorado’s uninsured were undocumented immigrants, there’s wide variation across the state.

More than a third of the uninsured in Adams, Arapahoe and Denver counties were undocumented immigrants, for example. In other counties, including Gunnison, Gilpin and Archuleta, the rate was less than one percent (see Map 1). These are trends correlate with the areas of the state where people without proper documentation usually live. 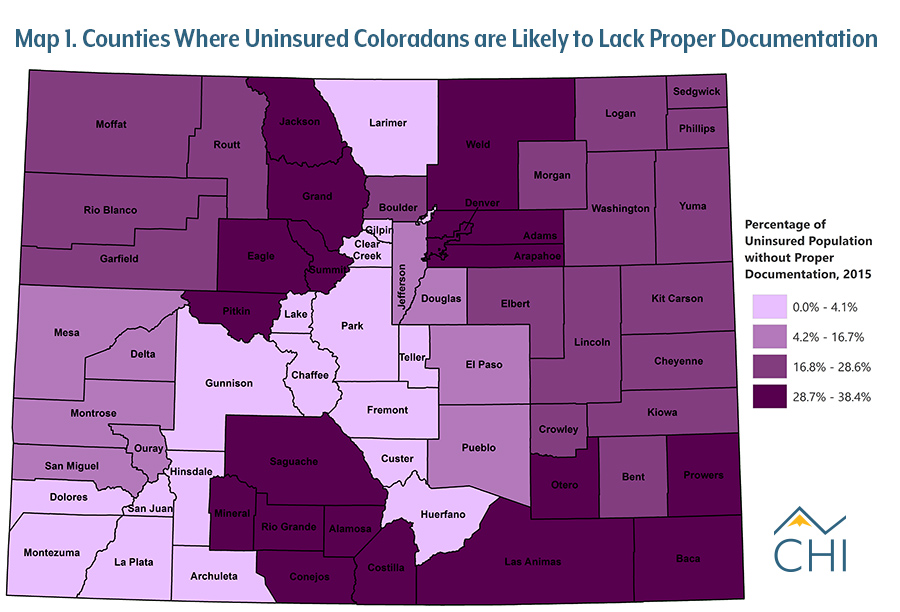 QUESTION FOUR:
Did the ACA Change Anything?

Colorado made considerable progress in covering residents through public insurance and tax credits in 2015. The ACA set a new baseline by creating higher expectations of health insurance access in the state.

In terms of EBNE rates, this translates to an 11 percentage point decline for Medicaid and CHP+, to 10 percent in 2015 from 21 percent in 2012. This happened even though the ACA increased the number of Coloradans eligible for public coverage.

But EBNE rates varied by county, according to CHI’s analysis. (See Map 2).

This is likely because the Medicaid eligibility expansion had a stronger effect in some areas, particularly those that are home to many low-income residents.

Even so, the analysis reveals that the number of public insurance enrollees increased in every county. (See “Where’s the Data?” for information on how you can find numbers for your county.) 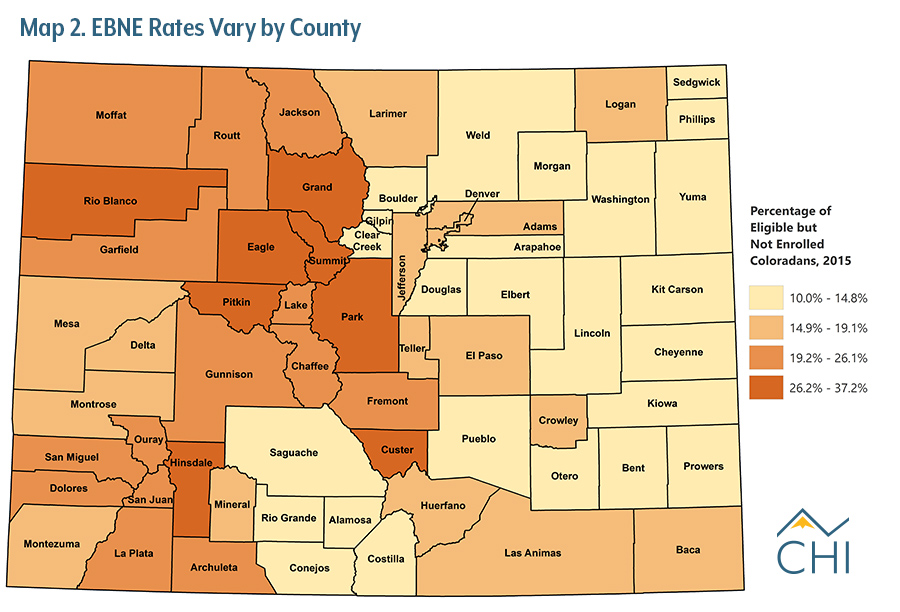 More detailed data on EBNE rates are on CHI’s website. Data tables are available for the overall uninsured population. They are also broken down by adults and children. EBNE populations are also split by various demographics such as race/ethnicity, primary language and age. Finally, a methodology document explaining how CHI arrived at these conclusions is posted.

1 This analysis focuses on populations under age 65. 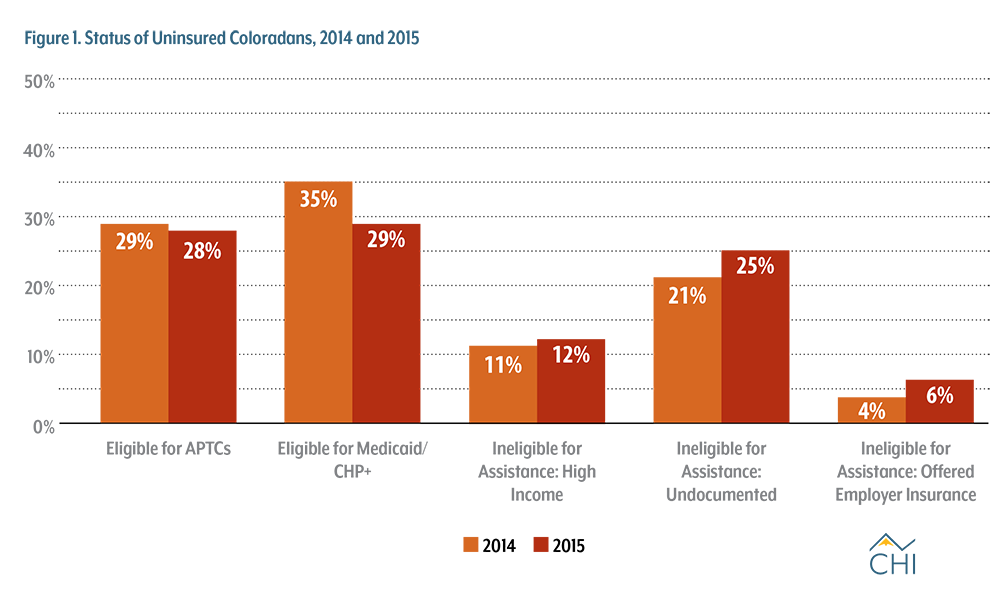