The Colorado Health Institute (CHI) has analyzed new county-level estimates on drug overdose deaths by county from the Centers for Disease Control and Prevention in a report and a time-lapse map.
Published: September 20, 2016 | Updated: April 11, 2018
Behavioral Health
Substance Use

Update: See CHI's most recent analysis of the latest drug overdose data at this link.

And over those 13 years, the drug overdose death rate has increased in each Colorado county except for one — Mineral County in the southwestern part of the state. In some cases, the increase has been dramatic.

The Colorado Health Institute (CHI) has analyzed new county-level estimates from the Centers for Disease Control and Prevention for this report. In addition, CHI has created a time-lapse map that tracks changes in the drug-related death rates. (Go to http://bit.ly/1StBvc0.) 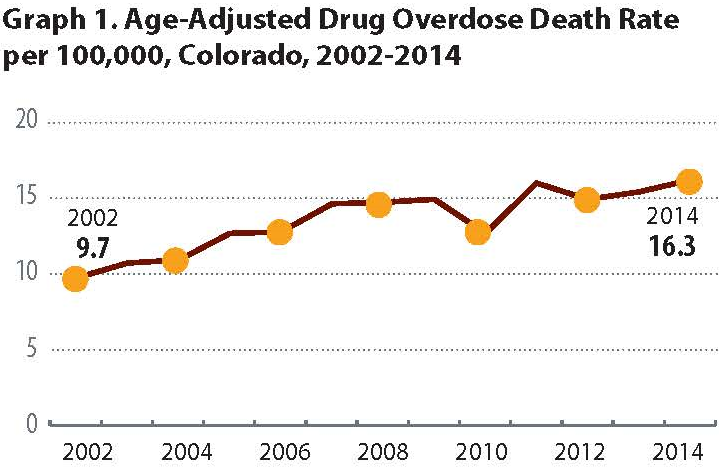 In 2014, 899 Coloradans died from either an intentional or unintentional drug overdose. But some counties are encountering more deaths than others.

Twelve Colorado counties have drug overdose death rates of more than 20 per 100,000 residents, meaning they are among the highest in the nation.

Seven of those counties — Baca, Bent, Conejos, Rio Grande, Las Animas, Costilla and Huerfano — are in rural southern Colorado. Three — Adams, Denver and Pueblo— are urban counties along the Front Range. The final two are Delta on the Western Slope and Jackson in the north.

Many of these counties have struggled with high drug death rates over those years.

In total, 21 increased by five or more categories. Huerfano County has recorded drug death rates in the highest category since 2003. In 2002, the first year of available data, it was in the second-highest category.

In sparsely populated Mineral County, home to the town of Creede, the rate has remained in the lowest category since 2002.

Age-adjusted death rates (deaths per 100,000 Colorado population) are calculated in this analysis.

Because different diseases or causes of death may be more likely to occur in a certain age bracket, it is helpful to age-adjust in order to prevent data from being biased simply because a population skews older or younger.