2020 Colorado Insurance Rates and the Role of Reinsurance

January 15 marked the 2020 deadline to sign up for health insurance through Colorado’s individual market, where people may purchase coverage from an insurance company as opposed to their employer.

But unlike past years, this year’s enrollees could experience significant savings on their premiums.

After five years of skyrocketing health insurance rates — such as the 32 percent price increase going into 2018 — premiums plateaued in 2019. And in 2020, thanks to the new reinsurance program, many customers will see a clear decline in premiums. In fact, Colorado’s 20.2 percent average price cut is the largest drop in the nation.

The question is: Will the lower prices last?

With open enrollment ending, this brief analyzes the 2020 individual market insurance rates and anticipates where prices are headed.

Colorado’s 2020 health insurance rates saw a record drop on the individual market for coverage this year, with an average decrease of 20.2 percent from 2019.

In the past few years, the state’s individual market was ailing — measured by rising prices and decreasing numbers of carriers and plans. Since the Affordable Care Act (ACA) made it possible to track prices in 2014, insurance premiums rose thanks to a changing risk pool and other factors, including the rising cost of health care.

But going into 2019, Colorado’s individual market stabilized. Most participating insurers only saw small, single-digit percentage premium increases from 2018 to 2019, while in prior years carriers had average increases of 20 to 30 percent. The small group market saw the same price stabilization

Table 1 shows the changes in rates from 2016 to 2020, with the percentages representing the rate increase or decrease from the year before. Notably, every carrier dropped its prices in 2020. The steepest premium drops will go to Rocky Mountain HMO enrollees who will enjoy a decrease of 33.5 percent from 2019. Anthem enrollees will see the smallest premium decrease (12.5 percent), possibly because that carrier already dropped prices in 2019. Kaiser Permanente Colorado, the largest carrier on the individual market based on number of enrollees, will see a 15.4 percent price cut in 2020.

The number of plans offered to consumers will stay relatively stable in 2020, with a slight increase in plan choices on both the small group and individual markets.

Figure 1 shows the rapid exodus from the Colorado individual market in 2016 and 2017 as carriers reversed their initial enthusiasm for participating in post-ACA markets. That exodus was also marked by increased prices after carriers lost money due to sicker patient populations and higher-than-predicted use of care. The number of plan choices has been stable since 2018 in the individual market, with slight increases in the small group market.

Geography matters when it comes to choice and cost for Colorado’s insurance consumers.

The reinsurance program met its goal to provide the most substantial help to the most costly areas. It was designed to lower prices by 30 percent on the Western Slope (see Table 2), which has the highest premiums in the state and among the highest in the nation. Similarly, rural areas like the Eastern Plains also will benefit from discounted rates. Metro areas such as Boulder, Colorado Springs, and Denver, will see price drops of less than 18 percent, because the starting prices in these areas were lower.

Despite lower premiums, some Coloradans will have fewer carrier choices in 2020. In 22 counties, consumers will have only one on-exchange health insurance company — Anthem — offering individual plans. That’s up from 14 counties that had just one carrier in 2019.

The drop is due in part to the decision by two companies, Kaiser Permanente Colorado and Friday Health Plans, to stop offering individual plans in several counties. That said, only two of the counties (Eagle and Summit) had people enrolled in their plans.

Individual Market: Health insurance purchased directly from private insurance companies by individuals who don’t get health insurance through an employer or the government.

Though most Coloradans get their insurance through their employer, this brief focuses mainly on the individual health insurance market.

This brief also includes some analysis of the small group insurance market, which — like the individual market — is regulated by the state.

Colorado attributes the sizeable premium rate decrease almost entirely to the reinsurance program, which took effect on Jan. 1. Insurers made this clear in their proposed premium rates illustrating potential price changes with and without reinsurance (see Table 3).

The goal of reinsurance is to reduce insurance carriers’ risks by covering the most expensive claims in the individual market. In return, the insurance companies agree to reduce the premiums they charge consumers. Without reinsurance, insurers would charge higher premiums due to concerns about higher-risk people enrolling in their plans. Reinsurance reduces this concern.

To implement the reinsurance program, Colorado submitted a 1332 waiver to the federal government. The waiver was approved in July 2019. But before approval, insurers were asked to submit two versions of their proposed 2020 rates: one if reinsurance was authorized in 2019, and one if it was not. Table 3 illustrates the average rate changes by carriers under each scenario.

Even without reinsurance, many insurers were already planning to lower their rates. Although this is a sign that the market is stabilizing, the reductions were minimal. Reinsurance provided a boost to carriers, leading to significantly lower premiums than they would have been without the program in place.

Like in Colorado, ACA markets are stabilizing across the country.

And like in Colorado, many of the price drops are likely attributed to new reinsurance programs. Colorado’s experience is, so far, on par with the impact of the program in other states. Since 2017, at least seven states have seen average individual market premium rates drop by an average of 19.9 percent after adopting reinsurance programs. Alaska (adopted reinsurance in 2017) and Maryland (adopted in 2019) saw the largest premium price decreases, with 22.4 percent and 13.2 percent drops in 2018 and 2019, respectively. Oregon’s reinsurance program, which generated the smallest premium decrease, still resulted in an 8 percent decrease in prices after enacting reinsurance in 2018 and another 9 percent decrease in 2019.

What Does the Future Hold for Colorado’s Reinsurance Program?

It’s not yet clear that reinsurance’s early price controls will be sustainable into the future. Consumers and other stakeholders are concerned that reinsurance only changes the funding source without sparking any significant change or cost savings. Questions remain about many aspects of the reinsurance program.

Scale. The reinsurance program only applies to a small portion of Coloradans — about 7 percent of the state’s population, according to the 2019 Colorado Health Access Survey — because it is restricted to those who buy insurance on the individual market (such as those who are self-employed or don’t get insurance benefits from their employer).

Longevity. Although reinsurance is responsible for drastic decreases in premiums in 2020, consumers must keep in mind that it is only authorized by the state legislature for two years. It is important to consider the sustainability of its impacts past the two-year mark. The legislature will likely spend time discussing the future of the program during the 2020 session.

Shifting costs. In addition, some have criticized the program because they believe it to be a Band-Aid for expensive premiums, rather than something that addresses the root cause of these price hikes. Reinsurance does not affect the cost of care. Instead, it is a stabilization tool designed to provide temporary relief to people who need it most by reallocating dollars within the system.

Unintended consequences. Reinsurance has lowered the cost of many plans on the individual market, but some people who receive ACA subsidies could see an increase in premium costs — an average of $22 per month. However, DOI states that actual increases have been much lower for consumers who shopped around during open enrollment. Subsidies are based on the price of the second-lowest cost silver plan, and since reinsurance lowered the price of those plans, the subsidy amount is decreasing for some customers. This is likely to have the biggest impact for customers along the Front Range, while those in rural Colorado will see price cuts whether they get subsidies or not. Critics have also pointed out that the program does not have an insubstantial cost to the state, and that it could contribute to larger refunds necessitated by the Taxpayer’s Bill of Rights (TABOR). DOI has proposed a rule that would avoid a TABOR impact. 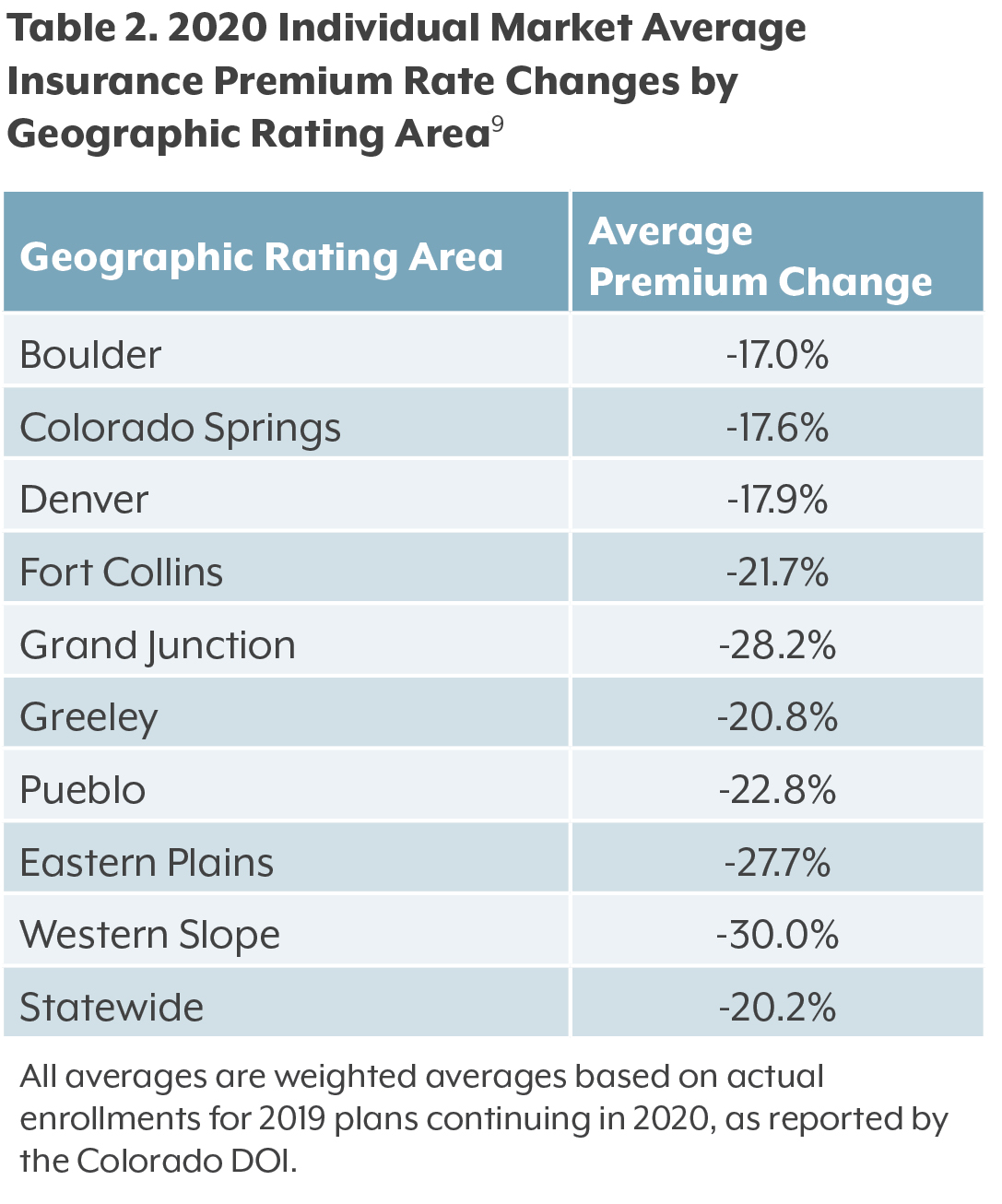 Federal politics. Policymakers and leaders are starting to talk about a national reinsurance program, which is in the early stages of discussion and would likely make state-level programs obsolete. Adopting a nationwide reinsurance program to bolster insurers would cost the U.S. $30.1 billion over three years, according to a new study in INQUIRY: The Journal of Health Care Organization, Provision, and Financing. For context, the Colorado DOI estimated the state reinsurance program to cost about $80 to $90 million in 2020 in Colorado — not inexpensive, even after a substantial federal contribution.

How does the reinsurance program interact with other insurance innovations taking shape in Colorado, such as Summit County’s Peak Health Alliance and the development of a proposed public option?

Price reductions are even greater in Summit County thanks to lower negotiated rates accomplished by Peak Health Alliance, a newly formed community purchasing alliance. This model brings together various individual market enrollees and employers to negotiate with insurers and local providers — especially St. Anthony Summit Medical Center, the county’s only hospital — to drive down costs. Other counties have taken notice and have already stated their intent to either join Peak or consider starting their own, similar alliances. Peak and reinsurance seem to complement each other, as they have combined to reduce premiums in the county in 2020. CHI’s report, “Peak Health Alliance: Summit in Sight,” examines the early impacts of the model.

In 2019, the legislature passed HB19-1004 to develop a proposal for a state health insurance option. The final proposal submitted in mid-November called for private insurance carriers to sell a state-designed plan at a discounted price. If all goes according to plan, coverage would start in January 2022. However, there is still uncertainty around what it would entail, as stakeholders have shared a variety of concerns about its design. Given its controversy, the public option will make up a large part of the action in the 2020 legislative session.

For years, rural Coloradans who buy their insurance on the individual market have paid some of the highest premiums in the country. That’s changing in a big way in 2020, with Colorado’s new reinsurance program bringing down premium prices by an average of more than 20 percent. The end of Colorado’s open enrollment period offers an opportunity to assess the impact of those lower prices.

Despite these savings, questions remain. Will the legislature attempt to extend authorization of the reinsurance program in the 2020 legislative session? With the reinsurance program currently ending in 2022, decisionmakers and consumers must wonder if prices will continue declining, stabilize at the lower rates, or increase once again. Furthermore, this uncertainty raises the question of how carriers will price their plans if they do not anticipate — or just do not know — that reinsurance will be reauthorized. The intersection with other current and proposed insurance innovations also leads to uncertainty with future rates and options, as does continuing instability and unpredictability at the federal level, including a pending court challenge to the validity of the entire ACA.26

Without a promise of long-term stability, there is a possibility that the lower insurance rates may rise once again.

CHI staffers who contributed to this report