The price of prescription drugs is rising, but the percentage of Coloradans who can’t afford them is falling. “Sticker Shock: More Coloradans Can Afford Prescriptions, but Problems Remain” analyzes data from the Colorado Health Access Survey.
Published: June 17, 2016 | Updated: April 20, 2017
Health Care Costs

The percentage of Coloradans who could not afford to fill a prescription is at a six- year low, according to an analysis of Colorado Health Access Survey (CHAS) data.

The CHAS also shows that Coloradans spent less out of pocket on prescriptions in 2015 than 2013.

While these findings may seem counterintuitive given headlines about rising drug costs, they make sense in light of the significant drop in Colorado’s uninsured rate from 14.3 percent in 2013 to 6.7 percent in 2015, a historic low driven by the Affordable Care Act (ACA). Essentially, because so many more people have insurance, they have better access to prescription benefits.

These important patterns emerge in the data: 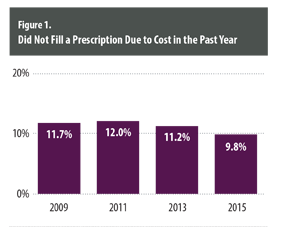 The affordability of prescription drugs is important because not filling a prescription can result in more hospitalizations and emergency room visits and increased illness.

This new analysis from the Colorado Health Institute addresses the following questions: Who is most likely to not fill a prescription due to cost? And has health reform affected Coloradans’ ability to afford prescription drugs?

Prescription drugs are playing a bigger role in the nation’s health care spending. They represented 9.3 percent of overall health spending in 2013, and are projected to grow to 10.4 percent by 2024. And while per capita prescription drug prices slowed between 2008 and 2013, they spiked in 2014, climbing an estimated 11.4 percent.1,2 Taken together, these data show why consumers and policymakers are concerned with prescription drugs.

How does Colorado’s spending on prescriptions compare to the rest of the nation?

The good news is that Coloradans had the lowest per capita spending on prescription drugs of any state in 2009, the latest year that data are available.3 While the data don’t indicate why this is happening, one theory could be that Coloradans tend to be healthier than the average american.

How many Coloradans can’t fill a prescription because it costs too much? And is that more or less than in the past?

About 500,000 Coloradans, or 9.8 percent of the population, did not fill a prescription due to cost in 2015, about 61,000 fewer people than in 2013. That’s the lowest percentage of people who said they couldn’t afford their drugs since 2009 (Figure 1). When the state’s economy was still experiencing the effects of the recession in 2011, the percentage was at 12 percent.

These numbers take into account all Coloradans, not just those who need a prescription.

Coloradans reported median out-of-pocket spending on prescriptions of $149 in 2015, about $45 less than in 2013, according to analysis of the CHAS. This decline in out-of-pocket costs could be due to the increasing number of Coloradans who gained health insurance through the ACA and no longer have to pay the full cost for medications.

A greater percentage of those who said they could not afford to fill their prescription were underinsured in 2015 than in 2013.

About 27 percent of the people who could not afford a prescription drug in 2015 were underinsured. That compares with 20 percent in 2013.

Increased insurance coverage also came with an increase in people who are underinsured, meaning they have coverage but their out-of-pocket costs eat up more than 10 percent of their annual income (five percent of income for those below 200 percent FPL).

These are usually people who enroll in plans with a low premium but high deductible, often known as bronze plans. As of December 2014, about 40 percent of Coloradans who enrolled in health insurance through the state’s marketplace, Connect for Health Colorado, bought a bronze plan.

Many people who were uninsured in 2013 transitioned into a health insurance plan by 2015 through private coverage or government programs like Medicaid or Medicare. Those programs cover prescription drugs, but to varying degrees.

But even people with adequate insurance sometimes have trouble affording drugs. More than a third (36 percent) of Coloradans who said they could not afford to fill a prescription were adequately insured.

Who is Most Likely to Not Fill a Prescription Due to Cost?

Not surprisingly, Coloradans without health insurance were the most likely to report not filling a prescription due to cost in 2013 and 2015. This group generally needs to pay for medications entirely out of pocket. Coloradans on the lower end of the income scale were the most likely to not fill a prescription due to cost in 2015. However, even low-income Coloradans are having less difficulty affording prescriptions (Figure 2). 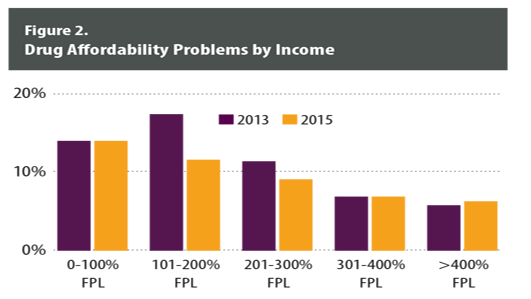 The closer Coloradans get to age 55, the less likely they are to be able to afford their prescriptions. However, almost every age category showed improvement from 2013 to 2015, most likely due to expansions in coverage (Figure 3). 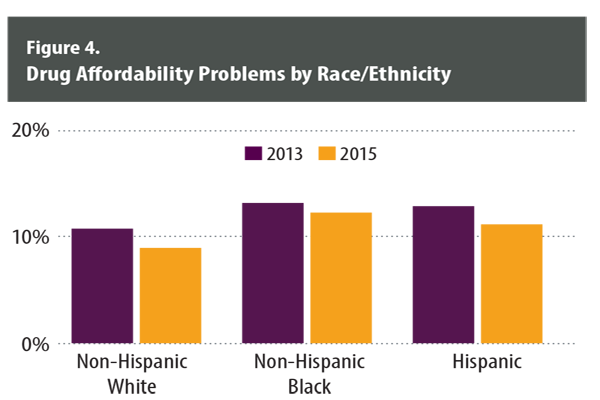 Racial and ethnic disparities in not being able to fill a prescription due to cost are minimal (Figure 4).

The percentage of non-Hispanic whites who could  not afford a prescription due to cost dropped to 8.9 percent in 2015 from 10.7 percent in 2013.

Disparities by race are slight, with only a three- point difference between whites on the low end at 8.9 percent and blacks at 12.2 percent. Among Hispanics, 11.1 percent said they didn’t fill a prescription because it cost too much. One explanation may be that Hispanics do not use the health care system as often as whites, and therefore are less likely to have a provider write a prescription in the first place. 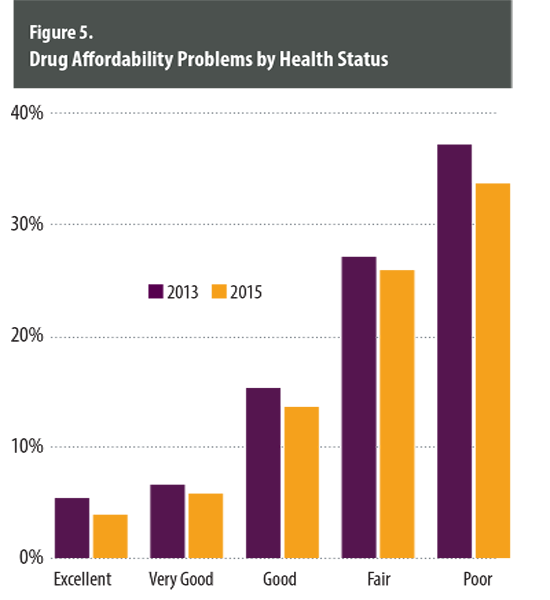 Coloradans in poor health are the least likely to be able to afford prescription drugs. Still, those in the poorest health appear to have benefited the most from the ACA (Figure 5). 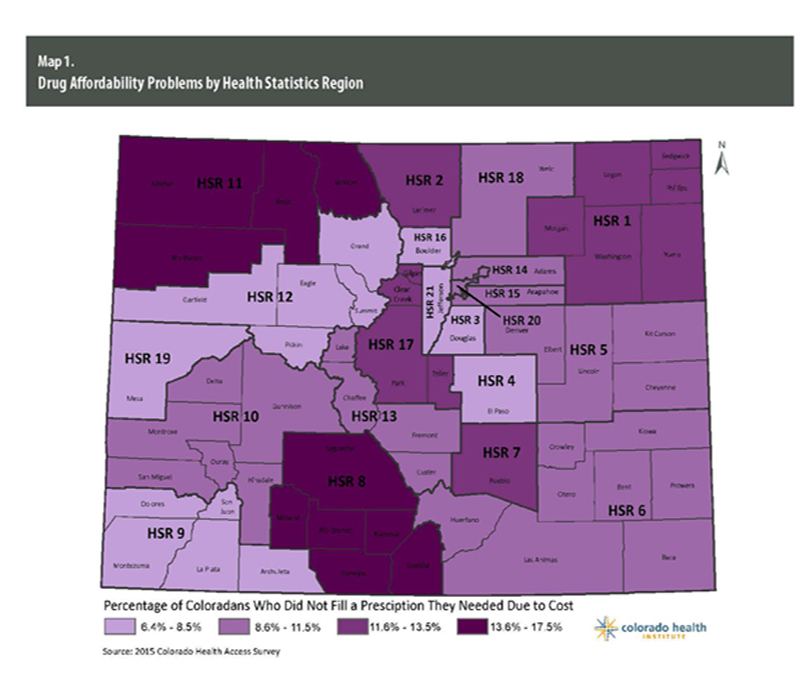 Pockets of rural Colorado have the highest percentage of residents who can’t afford a prescription (Map 1).

Despite the increase in health insurance coverage driven by the ACA, the price of prescription drugs continues to be a hot topic.

Decision-makers have taken note. State and federal legislative proposals around the country are aimed at understanding and lowering the cost of prescription drugs. President Obama’s 2017 budget contains proposals to increase the transparency of how pharmaceutical companies set drug prices and allow Medicare to negotiate prices.

State policymakers have introduced similar transparency measures, including one here in Colorado.8 The bill would have directed pharmaceutical manufacturers to submit reports about the most expensive drugs available in Colorado.9 Their reports would have been used to generate recommendations for controlling costs.

Pharmaceutical companies argue that drug pricing reflects the significant investment in research and development, and that they are being unfairly targeted to report proprietary information.

That argument seems to have traction, as most of the proposals have yet to become law. The proposed Colorado legislation failed when some criticized it for going too far and others said it didn’t go far enough.

Beyond pricing transparency, efforts by consumer advocacy organizations have called for more direct ways to help consumers, such as putting caps on total monthly copayments — rather just setting caps for individual drugs — to help those with chronic conditions who need several medications.10

It’s challenging to understand how often Coloradans forgo needed prescriptions. Some of them may never get a needed prescription in the first place because they do not have access to health care at a doctor’s office, clinic or hospital. Still, the ability to assess who is forgoing a prescription helps paint a richer picture of access to care.

This paper is part of the Survey Snapshot series. You can read the other Colorado Health Access Survey snapshots here