A Work in Progress

Despite more than two decades of efforts to bring parity to insurance coverage for behavioral health, many Coloradans are still not guaranteed benefits for substance use disorders that are comparable to coverage for physical health.

Governor Jared Polis, elected in November, promised that his office would direct the Division of Insurance (DOI) to strengthen enforcement of federal and state laws requiring parity in insurance coverage of mental and physical health care.

Colorado has taken a series of steps to level the playing field over the last decade.

The state has increased access to behavioral health through Medicaid expansion, added substance use disorder benefits to Medicaid, invested in integrating physical and behavioral health in primary care practices and elsewhere, and explored strategies to reform the health care payment system.

Despite this progress on the state level and the passage of a federal parity law in 2008, an estimated 430,000 Coloradans aren’t getting the help they need for substance abuse, an increasingly common and often deadly behavioral health disorder.1

As Colorado struggles with a record number of overdose deaths, parity laws provide one possible way for the legislature to intervene. This report from the Colorado Health Institute examines the advances and shortcomings of current parity laws and the implications for substance use treatment.

Federal and State Action on Parity

Parity laws require insurers to provide the same level of benefits for behavioral health conditions as for physical health care. These benefits might include the number of covered visits, deductibles, copayments, and lifetime and annual limits.2

State and federal laws to promote parity have evolved over time. (See Figure 1.)

In 1996, the U.S. Congress passed the Mental Health Parity Act, which required comparable annual and lifetime dollar limits for mental and physical health care. Colorado enacted its own parity law in 1997 (HB 97-1192), which required group health plans to cover treatment for six mental illnesses, including schizophrenia and major depressive disorder, at the same level as physical illness. It did not require health plans to cover treatment for substance use disorders.

That changed in 2007, when Gov. Bill Ritter and the legislature updated the law to include additional mental illnesses, such as post traumatic stress disorder, along with drug and alcohol disorders.

In 2008, the federal government updated and expanded its parity law. The Mental Health Parity and Addiction Equity Act (MHPAEA), the most important federal law affecting substance use treatment to date, required large group health plans that provide substance use and mental health treatment benefits to do so at the same level as their medical and surgical care benefits.3 It required, among other things, that payments and visit limitations for behavioral health benefits must be comparable to medical and surgical benefits.

The MHPAEA was a significant step in promoting parity. However, it stopped short of requiring all insurers to cover behavioral health services.

In 2010, the Affordable Care Act (ACA) expanded parity in two ways. First, it extended MHPAEA protections to insurance plans that had not been covered under previous laws. Second, it required individual market and fully insured small group plans to cover substance use disorder and mental health services as part of the law’s essential health benefits package. (See Figure 1 for a timeline of these laws.)

Even with these laws, in 2019, not all insurance plans are required to cover substance use disorder and mental health services at the same level as physical health. The ACA did not require Medicare or self-funded large group plans, in which employers assume direct financial responsibility for insurance claims, to cover essential health benefits. And if self-insured plans do cover essential health benefits, they can still opt out of MHPAEA’s parity requirement.5 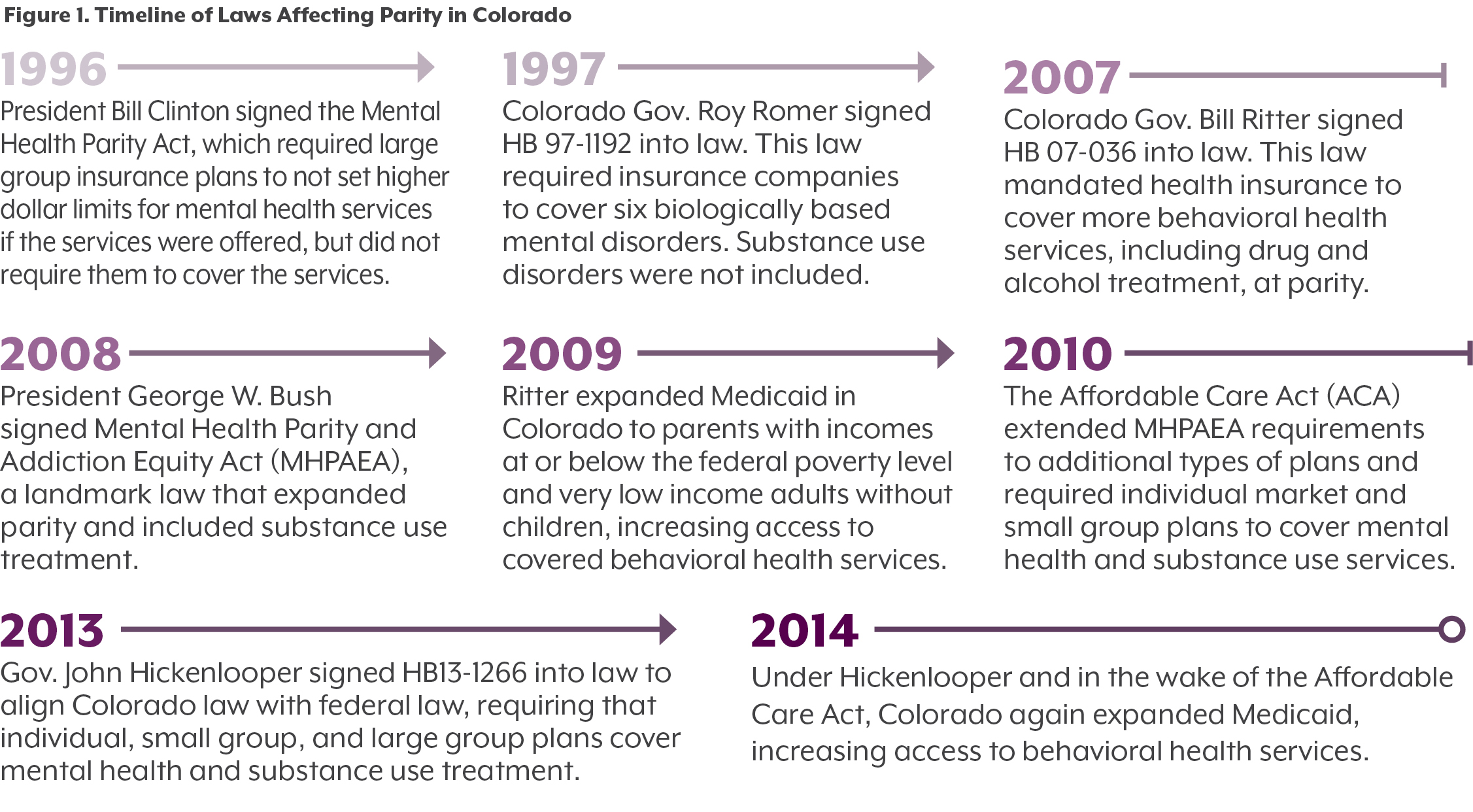 In 2014, Colorado extended Medicaid eligibility to lower-income childless adults, which brought more than 439,000 additional people into the program.6 At the same time, Colorado expanded the substance use disorder services that Medicaid covers to include medication assisted treatment, peer advocate services, and other items. It also raised the payment limits on services such as counseling and drug screenings.

Parity Laws Leave Many Behind

Still, not all Coloradans have comparable coverage for their behavioral and physical health needs.

There are no data that show exactly how many people in Colorado lack equal coverage for physical and behavioral health care. But about two in five insured Coloradans have health plans that are exempt from the parity requirements. (See Figure 2.)

Colorado law requires fully insured large group plans to provide coverage for behavioral health services, but self-funded plans are regulated by the federal government and are not mandated to cover these services. Medicare is also excluded from Colorado’s requirement. MHPAEA, the federal parity law, does not apply to Medicare, and self-funded employer plans can opt out of MHPAEA requirements.

Together, this is 2 million people — or 41 percent of the total insured population in Colorado — who are not guaranteed equal benefits for behavioral and physical health. It is worth noting that some of those people likely have insurance plans that abide by MHPAEA requirements.

An additional 350,000 Coloradans – about 6.5 percent of the state’s population – do not have health insurance coverage at all.8

Even for a state that has been advancing parity for decades, implementing and enforcing parity is difficult in practice.

Parity laws are complicated. Even if insurers are working to follow the law, they may have a hard time determining equivalent services or enrolling enough treatment providers into their networks.

In other cases, insurance providers may say that they cover behavioral health services equivalently to physical health, but they may not always follow through in practice. When this is the case, the onus falls on the person needing treatment to advocate for themselves to get the care they need. It is hard to know how often insurers are not following parity laws without clients reporting when insurers are not covering the services they need.

The legislature and regulators are starting to take notice. The DOI released a report in early March describing its increasing efforts over the past several years to enforce parity requirements.9

The DOI reviews and approves hundreds of health plans every year. In the past three years, it flagged three plans for violating parity requirements. The DOI also secured a federal grant to conduct a deeper market exam of Colorado insurers. That report is expected by fall 2019.

The ombudsman will provide resources for Coloradans seeking behavioral health treatment and help take some of the onus off people who need services to advocate for themselves against their insurance company. 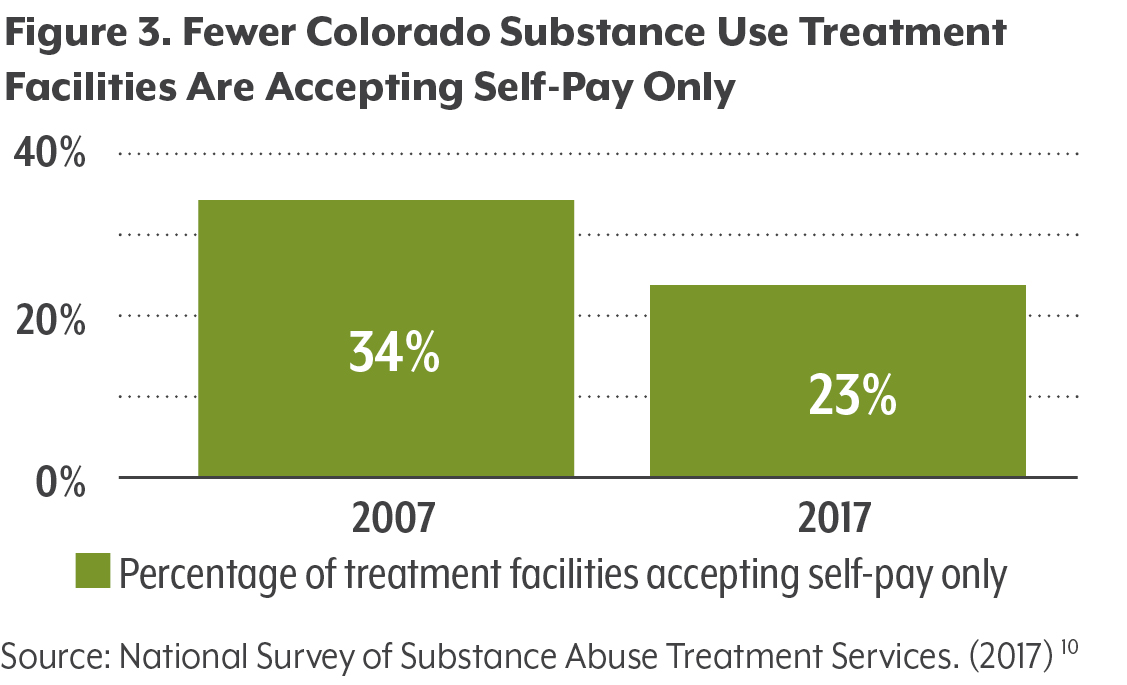 Federal and state parity laws and the ACA require insurers to pay for behavioral health services, but they do not ensure that treatment facilities accept insurance or that patients access the care they need. What Does This Mean for Coloradans?

Parity is not the only barrier to behavioral health care. But there continue to be opportunities for policy growth in promoting parity.

Federal Law: The federal government regulates self-funded plans, the largest contributor to the lack of guaranteed behavioral health access in Colorado. If the federal government were to mandate that self-funded plans comply with MHPAEA requirements or provide essential health benefits, it could expand access to substance use treatment for about 1.3 million Coloradans.

Workforce: Having an adequate network of substance use treatment providers is critical for putting parity into practice. Yet the Substance Abuse and Mental Health Service Administration has cited high turnover rates, low pay, and a shortage of professionals as contributing to a behavioral health workforce shortage.12 A 2017 Keystone Policy Center analysis looked at detox providers, residential treatment providers, outpatient service providers, and methadone providers across Colorado and found that only 12 counties have access to all four provider types.13 A 2017 analysis by the Colorado Health Institute found that only 702 providers in Colorado are waived to provide buprenorphine — a form of medication-assisted treatment.14 Bolstering the behavioral health workforce is an essential step toward parity.

A lack of insurance coverage for substance use disorder has historically been a barrier to treatment for many Coloradans. Coverage expansions and parity laws have helped extend access to a large group of Coloradans, but many still lack coverage that would ease access to treatment. And many of those with coverage still do not seek treatment, as is evidenced by the lack of growth in treatment admissions even as coverage has improved.

Why? Cost remains a concern. In 2017, just over half (52.8 percent) of those who didn’t access needed substance use services reported thinking their health insurance wouldn’t cover substance use treatment. And 54.1 percent were concerned about the cost of treatment.8

And policy changes and new laws do little to address the largest barrier to accessing substance use treatment in Colorado: stigma.

Nearly 6 in 10 (59.2 percent) Coloradans who didn’t access needed drug or alcohol services said it was because they were concerned about what would happen if someone found out or they were uncomfortable talking with a professional about this issue.8

There is no perfect solution. But there are ways to improve access and support Coloradans who need or want treatment for substance use disorders. Here are some options: 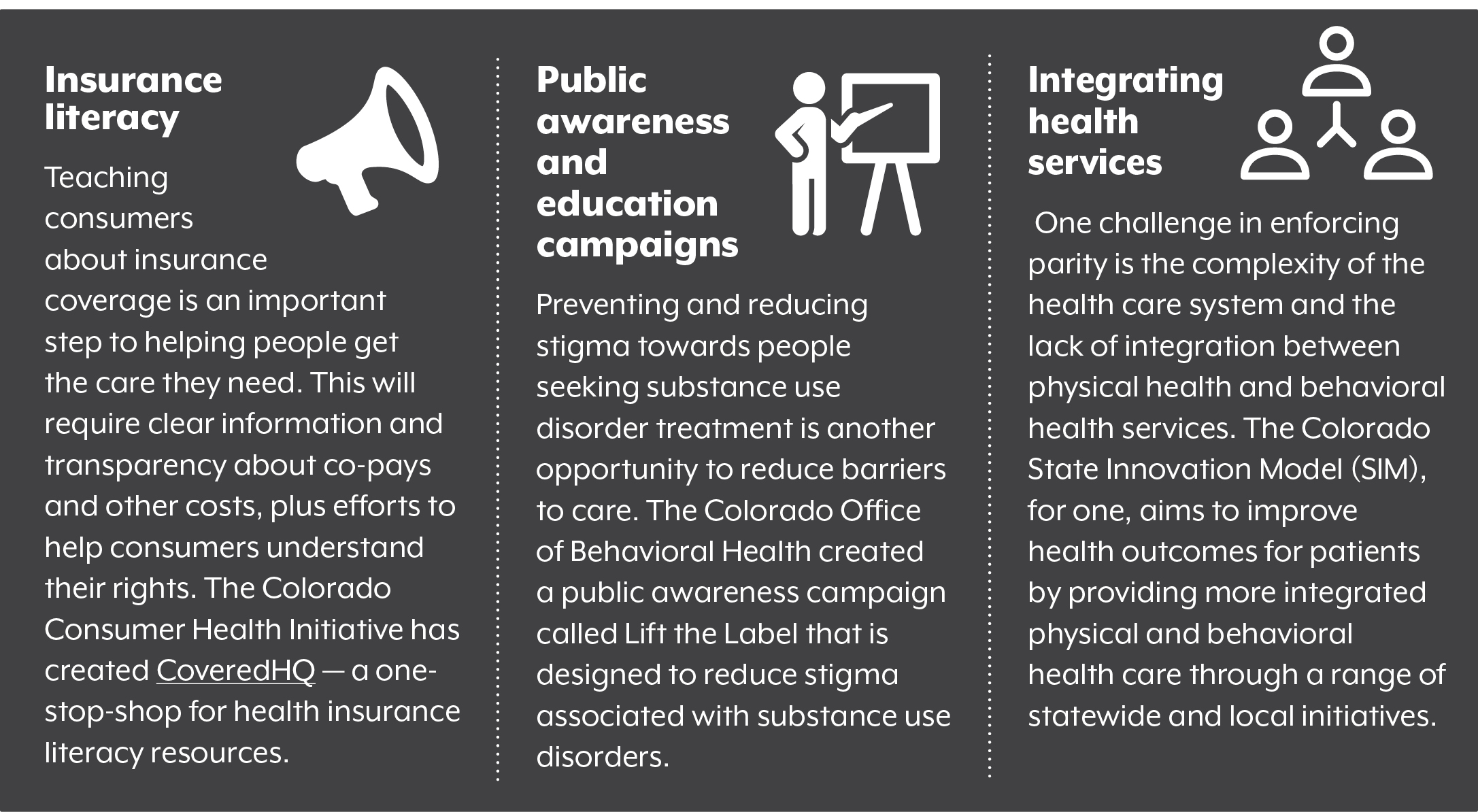 But insurance coverage is not the only barrier to treatment. Too many Coloradans report that stigma and persistent cost concerns prevent them from seeking treatment they need for substance use disorders.

Still, there is room for the state to increase the enforcement of federal and state laws and to build workforce to ensure that there is true parity in coverage for behavioral health and physical health services in Colorado.

The Polis administration has set its sights on strengthening the enforcement of parity in Colorado. CHI expects upcoming legislation and executive actions to continue to chip away at barriers to access for people experiencing behavioral health conditions.

1  National Survey on Drug Use and Health. (2017). Retrieved from:  https://www.samhsa.gov/data/sites/default/files/cbhsq-reports/NSDUHsaeChangeTabs2017/NSDUHsaeShortTermCHG2017.pdf.

5  Department of Health and Human Services. (2010). “Amendments to the HIPAA opt-out provision (formerly section 2721(b)(2) of the Public Health Service Act) made by the Affordable Care Act.” Accessed February 16, 2019 from: https://https://www.cms.gov/CCIIO/Resources/Files/Downloads/opt_out_memo.pdf.