Higher Rate of Eligible Coloradans Are Getting Coverage

Colorado is chipping away at the percentage of residents who remain uninsured even though they are eligible for the Medicaid or Child Health Plan Plus (CHP+) public insurance programs.
Published: December 25, 2015 | Updated: April 20, 2017
Health Coverage and the Uninsured
Medicaid 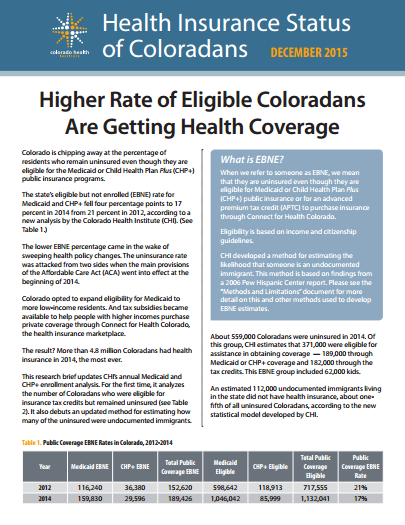 This research brief updates CHI’s annual Medicaid and CHP+ enrollment analysis. For the first time, it analyzes the number of Coloradans who were eligible for insurance tax credits but remained uninsured. It also debuts an updated method for estimating how many of the uninsured were undocumented immigrants.

The state’s eligible but not enrolled (EBNE) rate for Medicaid and CHP+ fell four percentage points to 17 percent in 2014 from 21 percent in 2012, according to the new CHI analysis.

An estimated 112,000 undocumented immigrants living in the state did not have health insurance, about one-fifth of all uninsured Coloradans.