A CHI analysis finds the proposal by congressional Republicans to replace the Affordable Care Act (ACA) would cause large reductions in Colorado’s Medicaid membership and a huge drop in federal funding for the low-income health coverage program.
Published: March 16, 2017 | Updated: May 24, 2017
Legislation and Policy
Medicaid

Twitter
What does the new GOP health plan mean for Medicaid in Colorado? Read the new @COHealthInst analysis here:

The proposal by congressional Republicans to replace the Affordable Care Act (ACA) would cause large reductions in Colorado’s Medicaid membership and a huge drop in federal funding for the low-income health coverage program.

The American Health Care Act (AHCA) is currently being considered in Congress, and it could fail or be amended. The bill as of March 16 would significantly alter Colorado’s Medicaid program beginning in 2020.

A new analysis based on a computer model created by the Colorado Health Institute (CHI) finds that the AHCA would result in:

•    A $340 million cut in federal funding for Colorado in 2020, the first year that Medicaid reforms would take effect;

•    A total loss of $14 billion in federal funding for Colorado over the first decade of the AHCA’s Medicaid changes;

The AHCA proposes two large changes for Medicaid: a payment model of per capita allotments and a limit on eligibility. The per capita funding system alone would result in multi-billion-dollar losses for the state over the course of a decade. Together with the AHCA’s eligibility restrictions, the changes would mean a $14 billion cut for Colorado by 2030. (See Figure 1.)

It would set up tough choices for state lawmakers, who would face the option of cutting off hundreds of thousands of people from Medicaid or making historic cuts to the state budget to pay for them. 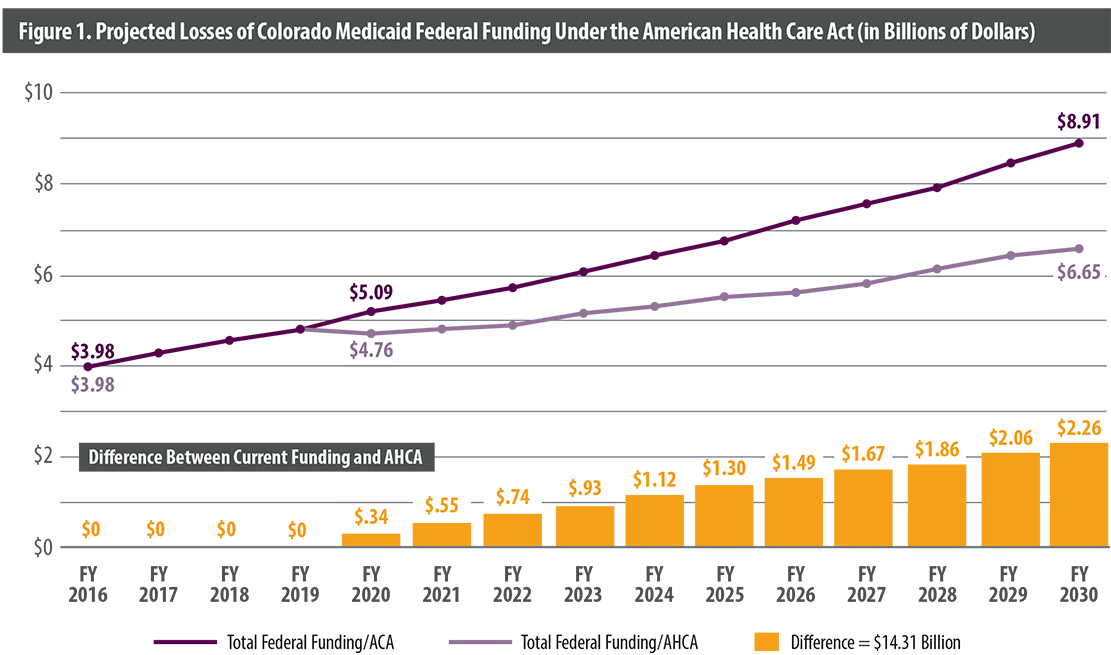 The AHCA plans to fund Medicaid through per capita allotments, which give a set amount to the state for each of its enrollees based on their demographic group — children, adults, elderly or disabled.

Per capita allotments would affect the state budget, but they would not directly affect individual enrollees. Currently, the federal government matches state spending on Medicaid dollar-for-dollar, with an enhanced match for people covered through the ACA’s Medicaid expansion. Critics of this system say it gives states an incentive to spend too much on Medicaid. Under a per capita system, funding would be set to a base level in 2016. Funding would grow with enrollment and be inflated each year based on the medical component of the Consumer Price Index (CPI).

However, funding under per capita allotments would grow slower than it would under today. That is because actual health care costs grow faster than the medical CPI, which measures the price of goods and services but not the quantity of consumption. For example, the price of maternal depression screenings might stay the same, but the quantity of those screenings has risen as more doctors and patients have recognized their value. But under the AHCA’s per capita system, funding would not rise to match increased demand.

As a result, Colorado’s federal Medicaid funding would drop, slowly at first and then quickly. By 2026, Colorado would expect to get $1 billion less in federal Medicaid funding per year compared with the current system. And by 2030, the cumulative loss of federal funding for Colorado Medicaid under the per capita system would be $6 billion — even if the ACA’s expansion population were left in place. (See Figure 2.)

The other major change proposed by the AHCA would tighten eligibility for Medicaid. This change would affect both the state budget and individual Medicaid members’ health coverage.

The ACA expanded eligibility for Medicaid to up to 138 percent of the federal poverty level. Adults without children make up the largest part of the ACA expansion. The federal government is scheduled to pay 90 percent of the cost of these enrollees as of 2020 — an ACA feature known as the enhanced federal match.

It’s common for Medicaid members to cycle on and off the program. Historically, more than 20 percent of the membership gains or loses eligibility every year. This provision of the AHCA would quickly whittle away at Medicaid eligibility, and by 2030, hardly anyone would be left from the ACA expansion.

Colorado’s Medicaid membership expanded rapidly under the ACA and is now roughly one quarter of the state population. CHI projects that Colorado Medicaid membership will be just under 1.6 million in 2020, when the AHCA’s reforms would begin. CHI also projects that Medicaid’s rapid growth will taper off over the next decade and reach 1.8 million by 2030 — a bit more than a quarter of the projected state population that year.

Conservative Republicans have proposed changing the AHCA to immediately end funding for the ACA expansion. That plan would result in a much faster loss of federal funding and Medicaid membership in Colorado. But by 2030, the effects of an immediate end to expansion would be about the same as the AHCA’s plan to gradually cut eligibility. (See Figure 3.)

The Congressional Budget Office analysis of the AHCA proposal released on March 13 projects faster turnover in Medicaid membership, in part because of AHCA provisions that make it harder to qualify for Medicaid and maintain eligibility. CHI’s analysis does not take these provisions into account, so it is possible that Colorado Medicaid funding and membership would drop faster than our current estimates.

Colorado stands to lose substantial funding and Medicaid enrollment through the AHCA. The combination of per capita allotments and eligibility restrictions would cause a $14 billion cumulative loss for the state budget by 2030.

A projected 600,000 Coloradans would lose their Medicaid eligibility by 2030, and it’s unlikely that people who lose coverage would become insured in the private market.

State legislators would have four broad options for dealing with the funding crisis that would result. They could cut Medicaid eligibility, cut benefits to the extent allowed by law, cut provider pay or find unspecified innovations to save money. Of the four, only cuts to eligibility seem likely to be able to fully bridge the gap in federal funding.

Federal health reform remains a work in progress, and it’s possible that the AHCA could undergo significant changes. CHI will update this analysis if such changes occur.

The Colorado Health Institute (CHI) built a mathematical model to project the effects of the Medicaid reforms in the American Health Care Act (AHCA) proposal on Colorado’s state budget and Medicaid enrollment through the year 2030.

This method allowed us to project the growth of different segments of the Medicaid population — children, seniors (those dually eligible for Medicare and Medicaid), adults who qualified for Medicaid before the ACA and adults who qualified after the ACA. Some of these groups get a 50/50 match from the federal government, while people in the ACA expansion bring enhanced funding of 90 percent or more from the federal government.

Starting in 2020, the AHCA ends enhanced federal matching funding for people who gained Medicaid membership under the ACA expansion but become ineligible for 30 days or more. CHI used Colorado’s FY 2016 “churn” rate — the percentage of people who become temporarily ineligible for Medicaid during a given year —to project the effects of the AHCA. In FY 2016, 21 percent of the Medicaid population churned out of the program. We applied the 21 percent rate to the projected Medicaid population in 2020 and compounded it annually to project a Medicaid population of 1,243,299 in 2030. That is nearly 600,000 fewer enrollees than it would have been under the ACA. This projection assumes that Colorado would choose to cut its Medicaid eligibility for people who lose the ACA’s enhanced federal match.

We calculated a third scenario. Assuming that Colorado decides to cut Medicaid eligibility for all ACA expansion enrollees — including those who would retain the enhanced federal match under the AHCA —an additional 47,640 people lose Medicaid coverage in 2030. Under this scenario, we project the lowest 2030 Medicaid enrollment: 1,195,659.

CHI then projected Colorado’s Medicaid spending under both the current system and the AHCA. To project current spending, we used data from the Kaiser Family Foundation on the growth in per person spending in Colorado’s Medicaid program by type of enrollee from FY 2000 to FY 2011, the most recent years available. We extrapolated this figure out to 2030.

The AHCA would change federal funding for Medicaid to a per capita allotment system. To project spending under this system, we used the formula specified in the AHCA, which considers Medicaid enrollment growth plus the medical care component of the Consumer Price Index (CPI) — the U.S. Department of Labor’s official calculation of inflation. To project medical care CPI, we calculated the compound annual growth rate of medical care inflation from September 2007 to September 2016 and extrapolated this figure out to 2030.

Growth rates calculated in Step 3 were applied to this amount to estimate per person spending through 2030.