It was a Saturday in March when one era ended for the Colorado legislature and another began.

Think of everything before that day as occurring in B.C.E. (Before Coronavirus Epidemic). On March 14, legislative leaders decided to adjourn — for two weeks, they thought — to guard against spreading the virus. And so began the days of C.E. (COVID-19 Era).

The pandemic did to legislation what a meteor did to the dinosaurs 66 million years ago. It wiped out the giants and left behind the creatures small and nimble enough to survive the cataclysm.

Legislators ended up staying away from the Capitol for more than two months, and when they returned, their biggest plans had been swept away. Democrats had been preparing to take on high hospital profits with a slate of bills, but they backed off when hospitals began losing money at the same time providers were risking their own health to care for the COVID-19 patients who crowded their wards. A push to create paid family leave — which riled the business lobby — had to be put on hold when many businesses were forced to shut their doors and lay people off.

When the C.E. part of the session began, legislators set to work on two grim tasks — filling a $3.3 billion gulf in the state budget and systematically killing most bills that cost money or required extra time for debate or public hearings.

The pandemic didn’t wipe out everything. House Democratic leaders pushed ahead with a bill to tighten the state’s loose rules on vaccine exemptions for schoolchildren even as opponents packed a weekend hearing on the bill that lasted hours. Bipartisan majorities acted quickly to pass a bill to expand telehealth and a bill to increase police accountability.

From the vantage point of mid-summer 2020, it’s clear that the COVID-19 Era will last more than a year. Economists predict that the state budget will be even tighter in 2021. The pandemic is still out of control in most of the United States, and a presidential election looms in November. There’s no telling what the new era will bring. 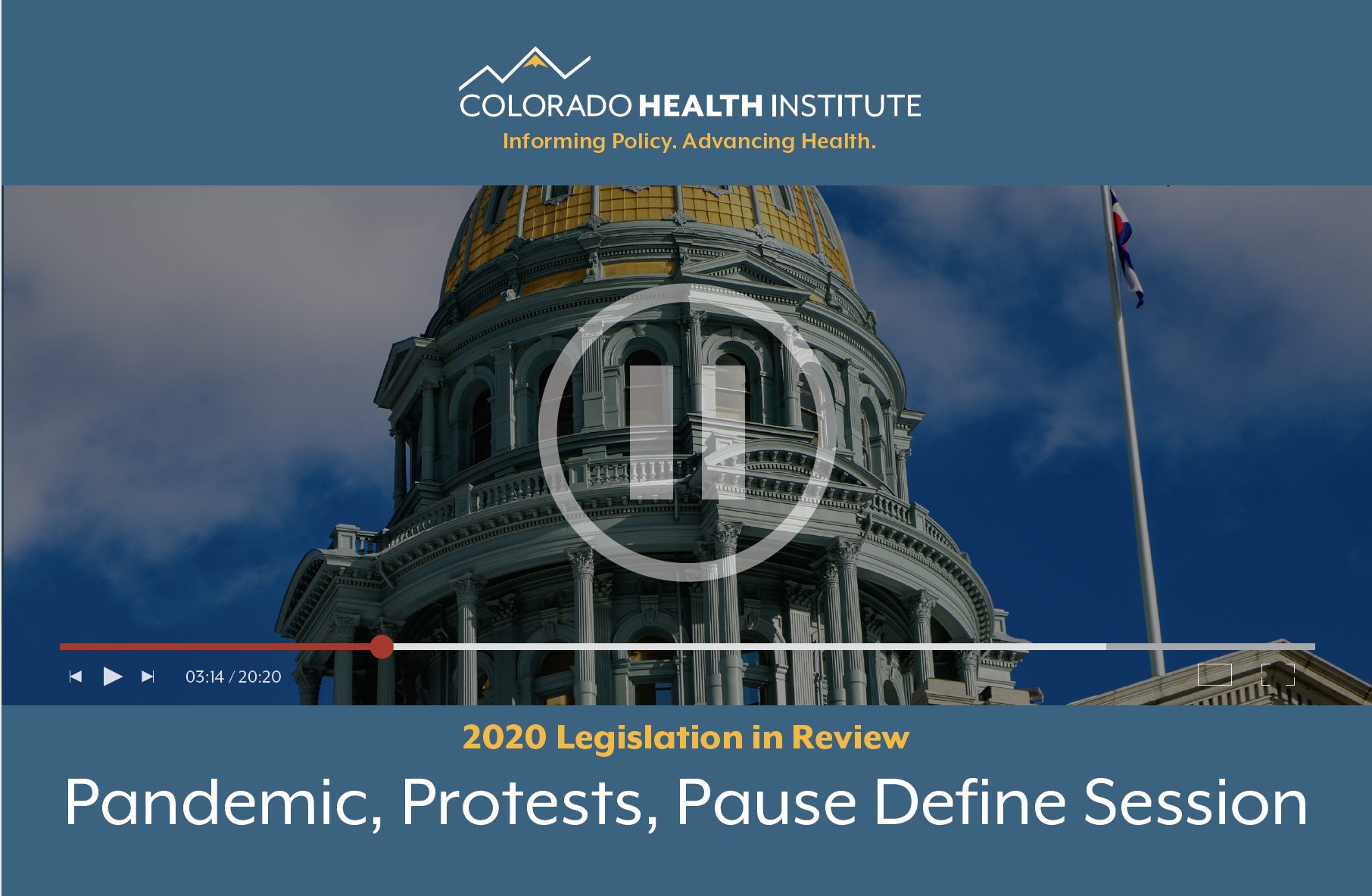 Stories of the Session

The arc of the 2020 legislative session was unlike any other. The first two months featured a flurry of new bills, including legislation to repeal the death penalty, increase transparency and regulations for pharmaceutical companies, and strengthen the regulation of smoking and vaping. Conversations swirled around implementing a public insurance option and creating a family and medical leave insurance (FAMLI) program. Polis and legislative leaders were poised for another session of legislative victories. Some bills passed and were sent to the governor’s desk while many others arrived at the Appropriations Committee in the House or Senate, where they sat until legislators had more clarity on the next year’s budget.

But the COVID-19 pandemic changed all that. Legislators packed up on a Saturday in mid-March for a recess of unknown duration. They returned more than two months later to a reshuffled legislative landscape, partisan fights, and growing community unrest over police brutality and racial injustice.

The return started with lengthy arguments over a measure to allow remote participation for legislators with health concerns. Democrats believed the temporary relaxation of rules was important to avoid unnecessary risk of illness, but Republicans pushed back, saying in-person voting was a risk elected officials must be willing to take. “If you’re going to do the work of the people, you [must] be down here,” said Rep. Dave Williams (R-Colorado Springs). Rep. Leslie Herod (D-Denver) countered, “We need our members to live through this pandemic.” In fact, legislators learned that one of their own, Rep. Jovan Melton (D-Aurora), had almost not survived the virus. The measure passed on a party-line vote in both chambers.

Around the same time, protests over the killing of George Floyd by Minneapolis police officers spilled into Denver’s streets, with crowds marching day after day, calling for police reform and justice for Black Americans. Some days turned violent, with police firing tear gas, pepper spray, and rubber bullets into crowds of protesters and at reporters covering the events. Legislators took a short hiatus as the protests swelled, then returned to pass a landmark police accountability bill with bipartisan support.

Despite expectations that legislative action in the final weeks would be focused on policies that were “fast, friendly, and free,” as Speaker of the House KC Becker put it, lawmakers tackled important and controversial subjects, passing measures on immunizations, tax reform, sick leave, telehealth, and more. Perhaps the most surprising thing, aside from the pandemic itself, was how much legislators managed to accomplish. The year was light on work time but heavy on policy changes.

Some successful bills were introduced in response to COVID-19, such as measures for sick leave and telehealth. Others were in the works before the pandemic hit and managed to reach the governor’s desk after legislators reconvened. Many other priorities, such as the public health insurance option, fell by the wayside — no match for the pandemic and the economic destruction that followed.

Polis signed an executive order in mid-May to allow electronic voter signature gathering for ballot initiatives, which has been greatly hindered by COVID-19, but the order was subsequently overturned by the state Supreme Court. The prohibition on remote signature collection may limit the number of additional initiatives on the November ballot.

Among the issues confirmed for the ballot:

NATIONAL POPULAR VOTE: Voters will determine whether Colorado will remain part of the National Popular Vote Interstate Compact (NPVIC). Last year, legislators entered the state into the compact with the passage of SB 19-042. States in the NPVIC pledge their electoral votes for the presidential candidate who earns the most votes nationwide. Opponents of the popular vote say it would turn all but the highest-population states into flyover country not worth candidates’ time.

PROHIBITION OF LATE-TERM ABORTIONS: If passed, this measure would prohibit abortions in Colorado after 22 week’s gestational age. A district court judge allowed the group sponsoring the measure an additional two weeks to collect signatures after the group sued the state, citing coronavirus concerns. Anti-abortion measures have been common on the state’s ballot in recent years and have been consistently defeated.

CIGARETTE, TOBACCO AND NICOTINE PRODUCTS TAX: If approved, this measure (described on page 14) would generate almost $170 million in FY 2021-22, the first full year it would be in place, with higher amounts in future years as tax rates increase. The tax revenue would be used to support the General Fund, affordable housing, rural schools, preschool, and tobacco education and prevention efforts.

Efforts to create a paid medical and family leave program, increase the distance of oil and gas operations from buildings, and change the state’s income tax structure from flat to tiered could also be on the ballot if backers can gather enough signatures by the August 3 deadline.

January 30: World Health Organization (WHO) declares a “public health emergency of international concern” for the sixth time in history.

March 11: WHO characterizes COVID-19 as a pandemic and Polis declares a statewide disaster emergency.

April 1: State Supreme Court rules that the 120 days in the legislature’s session do not need to be consecutive.

May 25: George Floyd is killed by police in Minneapolis.

June 1: State guidelines are loosened under the slogan “Safer at Home and in the Vast, Great Outdoors.”

Whatever happens between now and the end of the year, we know the world will continue to be quite different than it was on January 1. Where does Colorado go from here? Questions abound, but these three top the list.

Did the late-spring dip in COVID-19 cases create a false sense of comfort?

Colorado was slowly reducing social distancing measures and returning to a new normal when positive COVID-19 cases began to rise again. Polis was lauded for his policy choices to “bend the curve,” but what happens if the curve bends back in the form of a second (or third) wave? Rapid increases in confirmed COVID-19 diagnoses could spell more distancing measures and economic hardship, at least until a safe, effective vaccine is developed and deployed.

When will the budget recover?

The full impact of COVID-19 on the economy has yet to be determined. The state added jobs in June, but not nearly enough to make up for massive layoffs in previous months. It is unclear when the state budget will fully recover. Legislators on the JBC used several one-time maneuvers to spare many departments and programs from funding cuts stemming from COVID-19 for the immediate future, but they don’t have that option for next year.

What policy changes can we expect following the 2020 election?

Will Donald Trump or Joe Biden win the presidential election? The Trump administration has tried to dismantle the ACA; a Biden administration would work to bolster Barack Obama’s legacy and enact a host of social programs. Beyond the White House, will more moderate politicians lose races across the country as the parties becomes increasingly polarized? Or will a return to establishment politics win out, on one or both sides of the aisle? Here in Colorado, will Democrats maintain unified control of the state legislature, or could Republicans take back the Senate? The 2020 legislative session was highly consequential for public health; the election will be more so.

This is an abbreviated version of the full report. Download the PDF to read it here.